David Gentleman (born 11 March 1930, London) is an English artist-designer. He studied illustration at the Royal College of Art under Edward Bawden and John Nash. He has worked in various media - watercolour, lithography, wood engraving - and at scales ranging from the platform-length murals for Charing Cross underground station in London to postage stamps and logos. His themes too have varied widely, from paintings of landscape and environmental posters for the National Trust to drawings of street life in London and protest placards against the Iraq war. He has written and illustrated many books about countries and cities and has travelled widely throughout Britain, France, Italy and India.

Gentleman grew up in Hertford, the son of artists who had met as painting students at the Glasgow School of Art. He attended Hertford Grammar School and to the St Albans School of Art, did national service as an education sergeant in the Royal Army Education Corps in charge of an art room in Cornwall, and then went to the Royal College of Art. He stayed on there as a junior tutor for two years before becoming a freelance artist ready to take on whatever work came his way, however unfamiliar. His only specific resolves on leaving the RCA at 25, were never to teach, commute, or work with anyone else, and so far he has kept them. He has lived and worked in the same street in Camden Town since 1956, and also in Suffolk, but this settled existence has periodically been punctuated by spells of travelling which, since he dislikes holidays, have almost invariably been connected with his work - longer periods in France, Italy, Spain and India, shorter spells in South Carolina, Africa, Samoa and Nauru, and Brazil. Whenever he has tired of one medium or preoccupation he has turned to another, but throughout his life there has been nothing he would rather have been doing. He has four children: a daughter by his first wife Rosalind Dease, a fellow-student at the RCA, and two daughters and a son by his second wife Susan Evans, the daughter of the writer George Ewart Evans.

His work is represented in Tate Britain,[1] the British Museum,[2] the Victoria and Albert Museum[3] and the Fitzwilliam Museum.[4]

Gentleman has spent much of his working life painting and drawing landscapes, buildings and people, and drawing also underpins most of his design work. Many of his watercolours have been made in London and Suffolk and around Britain, on extended travels in France, Italy and India, and during briefer spells in South Carolina, East Africa, the Pacific and Brazil. He has held many exhibitions of these works. Commissioned series of watercolours have included landscapes for Shell, several Oxford Almanacks for the Oxford University Press, and interiors of the Foreign and Commonwealth Office for the FCO. His drawings and watercolours have been reproduced on textiles and wallpapers, dinner plates for Wedgwood and on a Covent Garden mug for David Mellor. His architectural drawings have appeared in House & Garden, The Sunday Times, New York Magazine, and on the RIBA’s series of Everyday Architecture wallcharts. His most recently published watercolours were made as illustrations for Ask the Fellows Who Cut the Hay by George Ewart Evans, 2010. In 2010, Gentleman was specially commissioned by Dulwich Picture Gallery to create a design for its Christmas Card. The original watercolour painting behind the design, 'Suffolk Garden under Snow' captures the artist's own garden in winter, and was auctioned on eBay from Monday 22nd November to Wednesday 1st December at http://donations.ebay.co.uk/charity/charity.jsp?NP_ID=41841 in support of Dulwich Picture Gallery as part of the Big Give Christmas Challenge.

Wood engravings and a mural on the Underground 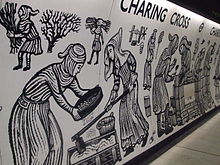 Part of the mural at Charing Cross station

Gentleman’s early wood engravings were for Penguin paperbacks, greetings cards, wine lists, press ads, and books – a lavish Swiss Family Robinson for Limited Editions Club of New York, and a more modest edition of John Clare's The Shepherd's Calendar for the Oxford University Press. He later engraved 32 covers for the New Penguin Shakespeare series. His wood engravings also appear on many of his stamps, and at a very different scale in a 100 metre-long mural, his most widely seen public work. In 1978 London Transport commissioned the platform-length Eleanor Cross murals on the underground at Charing Cross station. It shows, step by step as if in a strip cartoon, how the medieval workforce built the original cross, from quarrying the stone to setting in place the topmost pinnacle. Its wood-engraved images of stonemasons and sculptors, enlarged twenty times to life-size, mirror today’s passengers, 20,000 a day, also going about their day’s work.

Between 1982 and 1997, he wrote and illustrated six travel books: David Gentleman’s Britain, London, Coastline, Paris, India and Italy. Collectively they form his most extensive related works. He had also previously written and illustrated four books about a small child on holiday: Fenella in Ireland, Greece, Spain and the South of France.

Gentleman has also illustrated many books by other people, including drawings for the classic cookbook Plats du Jour and engravings for John Clare’s The Shepherd’s Calendar. In 2009 he painted watercolours to illustrate Ask the Fellows Who Cut the Hay by George Ewart Evans. For the Limited Editions Club of New York he illustrated The Swiss Family Robinson, Keats’ Poems, The Jungle Book, and The Ballad of Robin Hood, and several books for children, including Russell Hoban’s The Dancing Tigers. He has also designed many paperback covers and jackets: for Penguin Books, E. M. Forster’s novels and the New Penguin Shakespeare wood engravings; for Faber, many watercolours for Siegfried Sassoon and Lawrence Durrell novels; and for Duckworth, wood engraved or typographical designs for scientific and classical works.

Between 1962 and 2000 Gentleman designed 103 stamps for the Post Office, making him the most prolific and acclaimed stamp designer in Britain.[5] These include sets for Shakespeare, Churchill, Darwin, British Ships, Concorde, the Battle of Britain, the Battle of Hastings, the BBC, Good King Wenceslas, The Twelve Days of Christmas, Social Reformers, Ely Cathedral, Abbotsbury Swannery and the Millennium. Perhaps his greatest contribution to stamp design was his album of experimental designs, later described as ‘revolutionary’, which was commissioned by Tony Benn, then Postmaster General. In 1965 Gentleman had written to Benn suggesting that British special stamps would be enhanced by making their subjects more interesting and by dispensing with the large photograph of the Queen then mandatory, or alternatively replacing it with a smaller profile silhouette derived initially from Mary Gillick’s coinage head. The purpose of ‘The Gentleman Album’ was to demonstrate how such proposals would work out in practice. Over forty years later, the wider range of subjects, the profile and the simpler designs that it made possible remain an established feature of all British special stamps.[6]

The Royal Mint have issued two of Gentleman's coin designs. The first (issued jointly with the Monnaie de Paris in 2004) celebrated the centenary of the Entente Cordiale, and the second in 2007 commemorated the bicentenary of the Act for the abolition of the slave trade. Other miniature design commissions have included symbols or logos for the Bodleian Library, British Steel and a redesign of the National Trust’s familiar symbol of a spray of oak leaves.

Gentleman has designed posters for several public institutions, including London Transport (Visitors’ London and Victorian London), the Imperial War Museum, and the Public Record Office. Perhaps the most arresting of these posters were an extensive series in the seventies for the National Trust, using startlingly unconventional designs, photographs and photo-montages; several of them won design awards. Later, poster-like designs completely replaced words in his provocative and controversial book A Special Relationship (Faber, 1979) on the US/UK alliance.[7] Gentleman later came to feel that these images would have been more effective as actual posters instead of being tucked harmlessly away inside a book.[8] So on the eve of the Iraq war in 2003 he offered Stop the War Coalition a poster saying simply ‘No’. This was carried on the biggest protest march in British history. It was the first of many march placards, including ‘No more lies’ and ‘Bliar’. His largest design was an installation in 2007 of 100,000 drops of blood, one for each person already killed in the war. The bloodstains were printed on 1000 sheets of card pegged out in a vast square covering the grass in Parliament Square.

Gentleman's first lithographs were posters for an Royal College of Art theatre group production of Orphee and a student exhibition, and one of his first commissions was for a large Lyons lithograph. Between 1970 and 2008 he went on to make many suites of lithographs of buildings (Covent Garden, South Carolina, Bath) and landscapes (of Gordale Scar, of the Seven Sisters, and several of Suffolk subjects). Most of these lithographs were printed in several colours and were essentially representational. In 1970 he made the six much more severely formalised and almost poster-like Fortifications, screenprints which were published in New York. A number of these lithographs and screenprints are in the collections of Tate Britain.

Books for children by Gentleman

Solo exhibitions of watercolours by Gentleman