The former building of the Ossolineum Institute in Lwów, now Ukraine

The Ossolineum or Zakład Narodowy im. Ossolińskich (ZNiO, National Ossoliński Institute) a meritorious department for Polish science and culture (until 1939 it combined a Library, Publishing House and the Lubomirski Museum), which was founded for the Polish Nation in 1817 by Józef Maksymilian Ossoliński, and was opened in 1827 in Lviv.

It was one of the most important Polish culture centres, since it had an extremely rich library collection, which was the second in the country when it comes to its size after the Jagiellonian Library. Incomes form the land estates of its founder, managed for life by its curators, became the livelihood of the Institute. 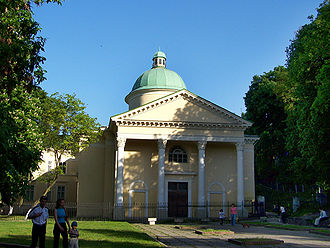 Since the foundation of the department and up to 1945, the National Ossoliński Institute was located in a former cloister and in the Church of the Calced Carmelite Nuns on 2 Ossolińscy Street in Lviv. After the first partition of Poland and the dissolution of many cloisters by Joseph II, the Austrian emperor, the cloister building fell into ruin. The restoration of the building was the work of Józef Bem. In 1823 the Museum Lubomirskich was attached to the Ossoliński Institute, which was established by prince Henryk Lubomirski.

Ossolineum in Galicia was under Austrian rule concentrating the Polish intellectual movement and was one of the most important centres of Polish culture in the annexation and Germanization. During that time there were many persecutions in the form of police searches and arrests of employees of the centre.

In accordance with the intention of its founder it became one of the most important research centres on history and Polish literature because it manages one of the biggest book collections in Poland as well as a large collection of manuscripts and autographs in which there are medieval manuscripts and oldest prints.

The library has national character i.e. the Polish department is the biggest and it attempts to complete the whole Polish scientific and literary oeuvre. Ossolineum is the owner of manuscripts of the foremost Polish writers and poets: Mickiewicz, Ansyk, Sienkiewicz, Kasprowicz, Reymont, Żeromski, and above all Słowacki.

Ossolineum had also the biggest in Poland, complete collection of Polish press from 19th and 20th centuries.

In his last testament, the founder, Józef Maksymilian Ossoliński named members of Ossoliński family to hold the post of economic curatorship and in striving to maintain the continuity of the Institute mentioned 28 notable Polish families among whom a successor could be chosen in case if his own family died out.[1]

After the seizure of Lviv by the Soviet Union in September 1939, the Ossolineum was closed down and its library holdings were absorbed by the Lviv Branch of the Academy of Sciences of the Ukrainian SSR.[2] The Lubomirski Museum's collection was distributed among various Lviv museums managed by the Ukrainians.[3] During the German occupation of Lviv (from 29 June 1941 to 27 July 1944), the Ossolineum library was incorporated into the structure of the German Staatsbibilothek Lemberg. After another seizure of Lviv by the Soviet army, from August 1944 this library functioned as a so-called Polish Sector of Lviv Sciences Institute's library.

At the beginning of 1944 the German government decided to move not only the collection of Lviv’s library, but also university and polytechnic library and Shevchenko Scientific Society.

According to German orders two transports, which were prepared by professor Mieczysław Gębarowicz, who was managing Ossolineum during the war, were supposed to include only German specialized literature and a reference book collection of the main reading room. However, it also consisted of the most valuable and carefully selected special collections and Ossolineum’s cimelias. Together there were 2,300 manuscripts, cir. 2,200 documents (diplomas), cir. 1,700 old prints, cir. 2,400 figures and drawings from an old collection of Lubomirsky’s Museum, the Pawlikowski collection and hundreds of old coins. Moreover, it also included cir. 170 of the most valuable manuscripts of another Polish foundation library the Baworowscy Library, and the most valuable manuscripts and incunabulums of the University Library in Lviv. Among the evacuated literature of 19th and 20th century there were the autographs of Pan Tadeusz of Adam Mickiewicz, the whole legacy of Juliusz Słowacki's manuscripts (with autographs of Mazepa, Lilla Weneda, Król-Duch) and Aleksander Fredro (with autographs of Pan Jowialski, Śluby panieńskie, Zemsta and Dożywocie) and then autographs of works of Seweryn Goszczyński, Teofil Lenartowicz, Józef Conrad, Henryk Sienkiewicz (with autographs of The Deluge), Józef Ignacy Kraszewski, Jan Kasprowicz, Władysław Reymont (together with the autograph of Chłopi), Stefan Żeromski.

Furthermore, the manuscript legacy of Lviv’s scholars was moved: Wojciech Kętrzyński, Ludwik Bernacki, Balzer, Karol Szajnoch and the archive of the Galician activist peasant movement of Bolesław and Maria Wysłouch. When it comes to documents, the oldest and most valuable copies were selected, starting from the documents of Pope Gregory IX from 1227 and the Silesian prince Henry I the Bearded from 1229.

The Ossolinem collection reached Cracow within March and April of 1944, where they were supposed to survive the military actions in a cellar of the Jagiellonian Library. Unexpectedly in the summer of 1944, this collection was transferred by the Germans further West and stored in Adelin (Zgrodno) near Złotoryja in Lower Silesia in the summer of 1944. Fortunately, they survived the whole war and in 1947 were incorporated into the collection of the reactivated Ossolineum Library in Wrocław.

Part of the library holdings and archival materials were transported in the years 1946–1947 from Lviv to Wrocław as a "gift of the Ukrainian people to the Polish nation".[2][3] They arrived by means of two train shipments in sealed carriages to the city, which was still in ruins at the time, and were opened to readers in September 1947.

In 1946–1947 Ukrainians divided the collection of Lviv’s Ossolineum. They followed the general rule that all materials referred to or with origins in lands east of the Curzon line, especially those connected with (in the Ukrainian commission's opinion) the history and culture of West Ukraine, and those whatsoever connected with Russia, Belarus, Podolia, Volhynia (Wołyń), Lithuania, Turkey where were to remain in Lviv. This rule applied to even those materials, in which there was only a single mention about West Ukraine.

There was a case where a great scroll of papers containing Greater Poland and Silesian materials could not be returned to Poland, because it had one page about Zhovkva (Żółkiew). The same happened to foreign materials that in the Ukrainian commission's opinion, where not connected with Poland.

Originally the Ukrainians planned to hand over only 30,000 volumes from The Ossolineum Library. The number of books was increased several times and in May 1946 it finally reached 150,000 old prints, prints from 19th and 20th century and manuscripts. This constituted only 15–20% of the entire collection because graphical and cartographic collections, and almost the entire collection of Polish periodicals from the 19th-20th century were not taken into consideration.

Polish staff was only assigned to technical works, whereas Ukrainias were responsible for decisions, control and management. Offices where materials were packed were closed and Polish staff didn not have access to it. The whole work was conducted in a great hurry.

While dividing the collection, quite unique criteria were applied. Among those questioned, were King's Stanisław August Poniatowski abdication act, because it was signed in Hrodna (Grodno), Leszczyński materials of John Amos Comenius as a bohemian, all materials about dissidents, materials about the Bar Confederation, and diplomatic correspondence concerning Partitions of Poland. 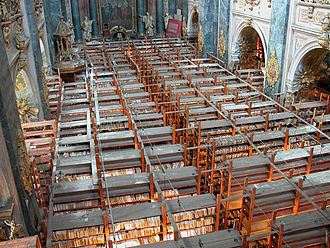 The Church of Society of Jesus, in which was a collection of press that was not bequeathed to Poland

In Lviv stayed priceless collection of Polish press, which was unprotected and “temporarily” stored for 50 years in Church of Society of Jesus, which was dedicated to the Saint Peter and Paul. W. Stefanyk Lviv's National Scientific Ukraine Library replaced National Ossoliński Institute.

Since 1947 Ossolineum Library in Wrocław is being reactivated on the basis of the collection from Lviv’s Ossolineum, which Poland recovered from authorities of the Soviet Union. After nationalization of landed estates in 1945 the source of money for the Library's maintenance in new historical conditions became the Budget. Since 1953, which was the moment of establishing Polish Academy of Sciences, Ossolineum library and publishing house became members of Academy institutions as a two separate institutions, whereas the Lubomirscy Muzeum was closed down.

In accordance with the act form January 5 1995 National Ossoliński Institute obtained the status of foundation subsidized from the Budget, at the same time Ossolineum stopped being an institute subordinate to Polish Academy of Sciences. Relations between Ossolineum and Stefanyk Library were established in the early 90s, but for a long time both parties offered proposals that excluded each other. In 1997 Poland put forward a proposal for return all Ossolineum collections from Lviv. In 2003 Ossolineum gained the option of full access to Polish collection stored in Stefanyk Library with possibility of copying (scanning and microfilming) and working out analysis by Polish specialists. In Wroclaw, there was agreement about mutually copying (scanning) Polish collection in Lviv and Ukrainian materials signed.

In 2006 in Lviv branch of Wrocław National Ossoliński Institute was open. It is situated in renovated with Polish help edifice of previous Baworowscy Library. It consists of exhibition hall and office for Ossolineum employee, who takes part in copying collection, preparing catalogue, signalling condition of collection and maintenance needs.