Indigo
This article is about the color. For other uses, see Indigo (disambiguation).

Indigo is a color named after the purple dye derived from the plant Indigofera tinctoria and related species. The color is placed on the electromagnetic spectrum between about 420 and 450 nm in wavelength, placing it between blue and violet. Although traditionally considered one of seven divisions of the rainbow or the optical spectrum, modern color scientists do not usually recognize indigo as a separate division and generally classify wavelengths shorter than about 450 nm as violet.[2] Optical scientists Hardy and Perrin list indigo as between 446 and 464 nm wavelength.[3]

The first recorded use of indigo as a color name in English was in 1289.[4]

India is believed to be the oldest center of indigo dyeing in the Old World. It was a primary supplier of indigo dye, derived from the plant Indigofera tinctoria, to Europe as early as the Greco-Roman era. The association of India with indigo is reflected in the Greek word for the 'dye,' which was indikon (ινδικόν). The Romans used the term indicum, which passed into Italian dialect and eventually into English as the word indigo. The country of El Salvador has been the biggest producer of indigo.

The same indigo dye is contained in the woad plant, Isatis tinctoria, for a long time the main source of blue dye in Europe. Woad was replaced by true indigo as trade routes opened up, and both are now largely replaced by synthetic dyes.

Though the word indigo has existed in English since the 13th century, it may never have been a common part of the basic color-naming system.[5] The mental maps of English speakers appear to contain just six basic spectral colors: red, orange, yellow, green, blue and purple.[6]

Classification as a spectral color 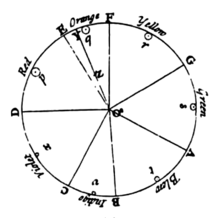 Indigo as one of the colours on Newton's color wheel

It was Isaac Newton who first introduced indigo as a spectral color. In the mid-1660s, when Newton bought a pair of prisms at a fair near Cambridge, the East India Company was beginning to import indigo dye into England,[7] supplanting the homegrown source of blue dye woad. In one of the pivotal experiments in the history of optics, the young Newton shone a narrow beam of sunlight through a prism to produce a rainbow-like band of colors on the wall. In describing this optical spectrum he acknowledged that the spectrum had a continuum of colors, but specifically named seven colors: "The originall or primary colours are Red, yellow, Green, Blew, & a violet purple; together with Orang, Indico, & an indefinite varietie of intemediate gradations."[8] He linked the seven prismatic colors to the seven notes of a western major scale,[9] as can be seen in his color wheel, with orange and indigo providing the semitones, thinking that perhaps perception of the two was related in some way. Having decided upon seven colors, he asked a friend to repeatedly divide up the spectrum that was projected from the prism onto the wall:

Newton's observation of prismatic colors. Comparing this to a color image of the visible light spectrum will show that "Indigo" corresponds to dark blue, while "Blue" corresponds to cyan.

"I desired a friend to draw with a pencil lines cross the image, or pillar of colours, where every one of the seven aforenamed colours was most full and brisk, and also where he judged the truest confines of them to be, whilst I held the paper so, that the said image might fall within a certain compass marked on it. And this I did, partly because my own eyes are not very critical in distinguishing colours, partly because another, to whom I had not communicated my thoughts about this matter, could have nothing but his eyes to determine his fancy in making those marks."[10]

Indigo is accordingly counted as one of the traditional colors of the rainbow, the order of which is given by the mnemonic Roy G. Biv. Maxwell and von Helmholz accepted indigo as an appropriate name for the color flanking violet in the spectrum.[11]

traditional 7 colors of the rainbow

It has been suggested that Newton was naming the colors differently to the present day understandings of them:[12][13] As Gary Waldman writes: "A careful reading of Newton's work indicates that the color he called indigo, we would normally call blue; his blue is then what we would name blue-green or cyan."[14] If this is true, Newton's seven spectral colors would have been:

The human eye is relatively insensitive to hue changes in the wavelengths between blue and violet, and if this is where Newton meant indigo to be, most individuals find it hard to distinguish. As Isaac Asimov noted, 'It is customary to list indigo as a color lying between blue and violet, but it has never seemed to me that indigo is worth the dignity of being considered a separate color. To my eyes it seems merely deep blue.'[15] Color scientists typically divide the spectrum at about 450 nm between violet and blue, with no indigo.[2][16]

Like many other colors (orange, rose, and violet are the best-known), indigo gets its name from an object in the natural world—the plant named indigo once used for dyeing cloth (see also Indigo dye).

The color electric indigo is an approximation of spectrum indigo. This is the brightest color indigo that can be approximated on a computer screen—it is a color located between the web color blue and the color violet on the RGB color wheel.

The web color blue violet or deep indigo is a tone of indigo brighter than pigment indigo but not as bright as electric indigo.

The color pigment indigo is equivalent to the web color indigo and approximates the color indigo that is usually reproduced in pigments and colored pencils.

The color of indigo dye is a different color than either spectrum indigo or pigment indigo. This is the actual color of the dye from the indigo plant when swatched onto raw fabric. A vat full of this dye is a darker color, approximating the web color midnight blue.

In an RGB color space, spectral indigo and violet must be approximated by purples, that is, by mixing a little red with a lot of blue. Spectral indigo is closely approximated by the color electric indigo.[citation needed] This color is approximately equivalent to the color of the CIE chromaticity diagram at the 430 nanometer line.[citation needed] It is much brighter than the pigment indigo reproduced below. The color of spectrum Indigo fits nicely between spectrum violet and spectrum blue.

It is impossible to represent spectrum indigo exactly on a computer screen, because true spectrum indigo is outside the color triangle or gamut of the RGB color space defined by the monitor primaries.

At right is displayed the web color blue-violet, a color intermediate in brightness between electric indigo and pigment indigo. This color is also called deep indigo.

The color box at right displays the web color Indigo which is equivalent to pigment indigo, the color indigo as it would be reproduced by artists' paints as opposed to the brighter indigo above (electric indigo) that it is possible to reproduce on a computer screen.

Pigment indigo can be obtained by mixing 55% pigment cyan with about 45% pigment magenta.

Pigment indigo (web color indigo) represents the way the color indigo was always reproduced in pigments, paints, or colored pencils in the 1950s. By the 1970s, because of the advent of psychedelic art, artists became used to brighter pigments, and pigments called "bright indigo" or "bright blue-violet" that are the pigment equivalent of the electric indigo reproduced in the section above became available in artists' pigments and colored pencils. 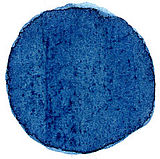 At right is shown the actual color of indigo dye.

Denim is a tone of indigo Crayola which resembles the shade of indigo used in Denim. Crayola created this color in 1993 as one of the new 16 colors.

Denim is the color of Denim cloth, which after being dyed with Indigo dye, is used to make jeans.

The Denim Revolution is a term used by the radical opposition in Belarus and their supporters in the West, who support a color revolution to implement the reintroduction of democracy, to describe their effort and aspirations.

In the 1960s, denim symbolized youth culture because so many young baby boomers wore denim jeans.

At right is displayed the color imperial blue.

The first recorded use of imperial blue as a color name in English was in the 1820s (exact year uncertain).[17]