Nesvizh (Niasviž, Belarusian: Нясві́ж [nʲaˈsʲvʲiʐ]; Russian: Не́свиж; Polish: Nieśwież; Yiddish: ניעסוויז; Latin: Nesvisium) is a city in Belarus. It is the administrative center of the Nesvizh District (rajon) of Minsk Province and location of the Nesvizh Castle World Heritage Site. Its 2009 population is 14,300 [1].

Nesvizh was first documented in 1223 [2], later becoming a part of the Grand Duchy of Lithuania. In the 15th century, while still a minor town, it passed to the Radziwiłł princely family, and remained the family's home until 1813. The first Belarusian language book printed in the Latin alphabet, a catechism by Symon Budny, was published in Nesvizh in 1562 [3]. Nesvizh Castle was founded in 1583, and between 1584 and 1598 two monasteries and a collegium, all belonging to different religious orders, were built [4]. On the initiative of Mikołaj "the Orphan" Radziwiłł the city was granted Magdeburg rights in 1586. Two epidemics that occurred in the city in the 17th century led to an establishment of a pharmacy in 1627.

During the Great Northern War of 1700-1721, the city was significantly damaged by the Swedish troops. It was rebuilt in the 1720s by Michał "Rybeńko" Radziwiłł. In the aftermath of the war, in 1740s and 1750s he founded a silk belt factory (which was later moved to Sluck), a cadet corps military school, several textile manufacturers and restored the Corpus Christi Church and a printing factory. Michał's wife, Franciszka Urszula Radziwiłłowa, founded the Nesvizh Radziviłł Theater, which included a choir and a ballet school.

In 1764 and 1768 the city was occupied by Russian troops, and in 1772 the library, which included approximately 10,000 volumes, along with paintings and other objects of art, was transferred to St. Petersburg. Books from the library were granted to the Russian Academy of Sciences.

Nesvizh was part of:

The city was a county (powiat) centre in Nowogródek Province during Polish rule between 1919-1939.

The Jews of Nesvizh

The Jewish population in 1900 stood at 4,687 [5], and approx. 4,500 on the eve of the German invasion of Operation Barbarossa. With the occupation beginning on June 27, 1941, they established a Judenrat. On October 30, 4,000 of the town's Jews were murdered and the rest confined to a ghetto. On July 20, 1942, the ghetto was surrounded by Belorussian police and the German commander announced that the ghetto's population would be liquidated with the exception of 30 essential skilled workers. The ghetto's underground organization, based on a Soviet-era Zionist group, called for self-defense, having one machine gun but mostly knives and similar arms. Most of the Jews were killed; a few succeeded in escaping to nearby forests to join partisan units, including the Zhukov Jewish partisan unit.[6] 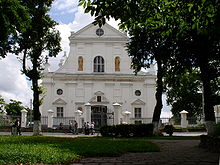 Facade of the Corpus Christi Church

The Corpus Christi Church (constructed 1587-1593) is one of the earliest Jesuit churches in the world and one of the first baroque buildings in the Polish-Lithuanian Commonwealth, influencing the later architecture of Belarus, Poland and Lithuania.

Nesvizh Castle, the family complex of the Radziwill noble family, is a World Heritage Site.