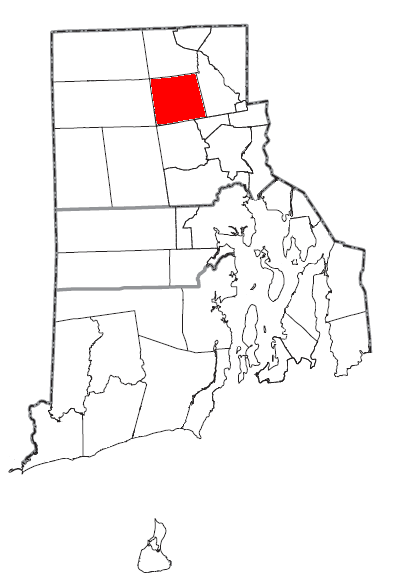 Smithfield is a town in , United States. It includes the historic villages of Esmond, Georgiaville, Mountaindale, and Greenville. The population was 20,613 at the 2000 census.

The town was first settled in the 1600s as a farming community and named after . There was an active community in early Smithfield that extended to south Uxbridge, in the early 1700s. In the nineteenth century several mills were built in the town. In the mid-nineteenth century the towns of , and , became separate towns. In the 1920s the was active in the area, and KKK rallies were held within the town. [http://www.projo.com/specials/century/month4/426nw1.htm] Also, the colonial ghost town of is located within the town.

Smithfield is named after , in England.

There were 7,194 households out of which 29.6% had children under the age of 18 living with them, 57.9% were married couples living together, 8.5% had a female householder with no husband present, and 30.6% were non-families. 26.8% of all households were made up of individuals and 12.9% had someone living alone who was 65 years of age or older. The average household size was 2.47 and the average family size was 3.02.

With the shopping plaza, the Crossings, Smithfield is thriving as an economic center for Northern Rhode Island. The Crossings was completed in the Early 2000s and includes anchor stores such as , Target, and . Smithfield is also home to one of a handful of Fidelity Investment's regional sites, with over 1500 jobs.

Smithfield's Town Charter, adopted by the voters in 1992 and ratified by the General Assembly, provides that any elected official is subject to recall. To force a recall election, 15% of the registered voters must sign a petition requesting the election. Should that high burden be met, there is a special election by which a simple majority of voters can remove the subject official from office.

The first ever recall petition in Smithfield was filed against Town Council President Stephen G. Tocco on September 4, 2007 and contained 3,046 signatures. At the time, 15%, or 2,304 signatures were required to mandate the recall election. The recall organizers say Mr. Tocco should be removed because of his admitted participation is a bribery scandal, in which he personally arranged and paid bribes to city officials in Pawtucket and Providence, in the late 1980s and early 1990s and also because of his recent poor behavior after having been elected Council President. Mr. Tocco claims that the bribery was too long ago to impact his performance on the Town Council.

On November 13, 2007, Mr. Tocco became the second elected official to be recalled in Rhode Island history (the first being a member of the Coventry School Committee, who was recalled by the people of his district in 1995). Mr. Tocco is, however, the first head of a town government to be recalled in Rhode Island. Of the 3,430 ballots cast, 2,691 were cast as yes (in favor of recall) and 739 were cast against. The election was certified by the Smithfield Board of Canvassers later that evening.