History of rail transport in Denmark

History of rail transport in Denmark 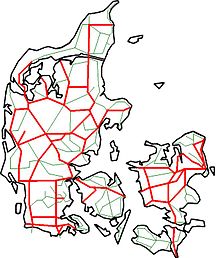 Railways in Denmark in 1932 DSB lines in red

The history of rail transport in Denmark began in 1847 with the opening of a railway line between Copenhagen and Roskilde. The Kiel-Altona line in Holstein was completed three years earlier, but the region had been lost to the German Confederation in the Second War of Schleswig.

The Danish national railway company, DSB, was established in 1885. Until recently, DSB took care of most aspects of rail operation, but the liberalisation efforts during the 1990s have resulted in several tasks being branched off into other companies.

In the 1830s, England and North Germany planned to construct a railway line between the cities of Hamburg and Lübeck to ease transport between the North Sea and the Baltic Sea. The Copenhagen government frowned on this, as they wanted to retain waterway traffic through Oresund, but to preempt these efforts, the Danish government set up the first Danish railway commission in 1835 to establish the layout of a railway line through the Duchy of Holstein. Consequently, the railway between Altona and Kiel was opened by King Christian VIII on September 18, 1844. However, the Duchy of Holstein was only in personal union with Denmark, with the King of Denmark being Duke of Holstein, and as a result of the Second War of Schleswig, Holstein was ceded to the German Confederation in 1864. The railway line was not the first in what constituted Denmark at the time (as Holstein was part of the German Confederation), but it was nonetheless the first to be built under the Danish monarchy.

In 1840, technician Søren Hjorth and accountant Johan Christian Gustav Schram published the paper Jærnbane mellem Kjøbenhavn og Roeskilde, in which they argued that a railway between Copenhagen and Roskilde would be profitable. However, there was no further interest in this project until 1841, when cooperation with Industriforeningen had been established. In 1843, after substantial financial recalculations, they applied for a concession to construct a railway from Copenhagen via Roskilde to a coastal town on West Zealand. This was granted about a year later, albeit not with the same level of governmental economic support as the Kiel-Altona line.

On July 2, 1844, Det sjællandske Jernbaneselskab (The Railway Company of Zealand) was established with Hjorth and Schram among the board of directors. Amidst considerable resistance from landowners, trouble with unstable labour and excessive expenditures, the economic resources necessary to complete the line were provided, and the Copenhagen-Roskilde line was opened, as the first in Denmark, on June 26, 1847. English engineer William Radford led construction. Sharp Brothers & Co., in Manchester, England built the initial batch of locomotives, the first of which was named 'Odin'.

Railway line in Denmark at the turn of the 1900s

Following ratification of the Danish Constitution in 1849, there was political will to improve trade routes to England and provide better connections between Copenhagen and the rest of the country. The primary means for this was to extend the Copenhagen-Roskilde line to Korsør, on the west coast of Zealand. During the 1850s, sufficient funding to extend the line to Korsør was secured, and the new segment was opened on April 26, 1856.

Before the First War of Schleswig, plans had been made in Schleswig to construct a railway from Flensburg, via Husum, to Tönning to limit German influence on trade. However, these plans were hampered by the war and the new political system. In 1852, the construction company Peto, Brassey and Betts (represented in Scandinavia by Samuel Morton Peto) was granted concession to build the line, which opened on October 6, 1854. The railway was very successful, carrying English transit goods until 1857, when the Oresund toll was abolished.