The name is a derivative of Spessart in Bavaria, Germany, the type locality of the mineral.[2][3] It occurs most often in granite pegmatite[2][3][4] and allied rock types and in certain low grade metamorphic phyllites. Sources include Australia, Myanmar, India, Afghanistan, Israel, Madagascar, Tanzania and the US.[1] Spessartine of an orange-yellow has been called Mandarin garnet and is found in Madagascar. . Violet-red spessartines are found in rhyolites in Colorado and Maine. 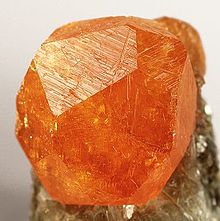