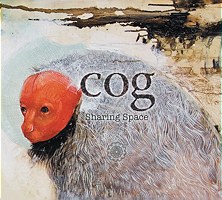 "Sharing Space" is the second full-length album by band Cog, released on 12th April, 2008. The album debuted at number 2 on the Australian Music Charts. The album was produced in Weed, by , who produced their first album, "" and has worked with artists such as Tool and . Midway through recording, their record label, Difrnt Tunes, had a change of management. This forced the band to speed up the recording process, which was already over budget, recording the second half of the album on a 7-day-a-week schedule.The "bodies upon the gears" speech at the beginning of "The Movie's Over" was a speech given by in 1964 at the .

Music videos for the songs "What If" and "Bird of Feather" have been produced.