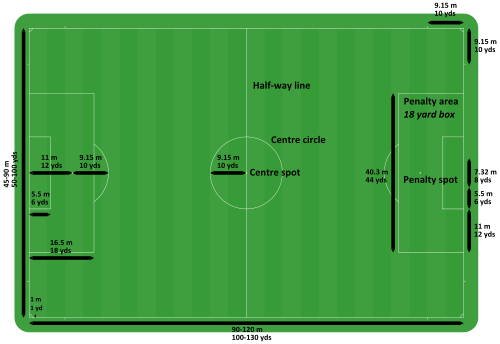 All line markings on the pitch form part of the area which they define. For example, a ball on or above the touchline is still on the field of play; a ball on the line of the goal area is in the goal area; and a foul committed over the 16.5-metre (18-yard) line has occurred in the penalty area. Therefore a ball must completely cross the touchline to be out of play, and a ball must wholly cross the goal line (between the goal posts) before a goal is scored; if any part of the ball is still on or above the line, the ball is still in play.

The field descriptions that apply to adult matches are described below. Note that due to the original formulation of the Laws in England and the early supremacy of the four British football associations within IFAB, the standard dimensions of a football pitch were originally expressed in imperial units. The Laws now express dimensions with approximate metric equivalents (followed by traditional units in brackets), but use of the imperial units remains common in some countries, especially in the United Kingdom.

Goal line at Old Trafford in Manchester in 1992.

Although the term goal line is often taken to mean only that part of the line between the goalposts, in fact it refers to the complete line at either end of the pitch, from one corner flag to the other. In contrast, the term byline (or by-line) is often used to refer to that portion of the goal line outside the goalposts. This term is commonly used in football commentaries and match descriptions, such as this example from a BBC match report; "Udeze gets to the left byline and his looping cross is cleared..."[5]

Goals are placed at the centre of each goal-line.[6] These consist of two upright posts placed equidistant from the corner flagposts, joined at the top by a horizontal crossbar. The inner edges of the posts must be 7.32 m (8 yds) apart, and the lower edge of the crossbar must be 2.44 m (8 feet) above the ground. Nets are usually placed behind the goal, though are not required by the Laws.

A goal is scored when the ball completely crosses the goal line between the goal-posts, even if a defending player last touched the ball before it crossed the goal line (see own goal). A goal may, however, be ruled illegal (and void by the referee) if the player who scored or a member of his team commits an offence under any of the laws between the time the ball was previously out of play and the goal being scored. It is also deemed void if a player on the opposing team commits an offence before the ball has passed the line, as in the case of fouls being committed, a penalty awarded but the ball continued on a path that caused it to cross the goal line.

History of football goals and nets

Football goals are first described in England in the late 16th and early 17th centuries. In 1584 and 1602 respectively, John Norden and Richard Carew referred to "goals" in Cornish hurling. Carew described how goals were made: "they pitch two bushes in the ground, some eight or ten foote asunder; and directly against them, ten or twelue [twelve] score off, other twayne in like distance, which they terme their Goales".[7] The first reference to scoring a goal is in John Day's play The Blind Beggar of Bethnal Green (performed circa 1600; published 1659): (an extremely violent variety of football, which was popular in East Anglia). Similarly in a poem in 1613, Michael Drayton refers to "when the Ball to throw, And drive it to the Gole, in squadrons forth they goe". Solid crossbars were first introduced by the Sheffield Rules. Football nets were invented by Liverpool engineer John Brodie in 1891.[8]

The penalty area with penalty box marking and the penalty arc in parallel to the goal. The smaller box is often called the 6-yard box

Two rectangular boxes are marked out on the pitch in front of each goal.

The goal area (colloquially the "six-yard box"), consists of the area formed by the goal-line, two lines starting on the goal-line 5.5 m (6 yds) from the goalposts and extending 5.5 m (6 yds) into the pitch from the goal-line, and a line joining these. Goal kicks and any free kick by the defending team may be taken from anywhere in this area. Indirect free kicks awarded to the attacking team within the goal area must be taken from the point on the line parallel to the goal line nearest where an incident occurred; they can not be taken further within the goal-area. Similarly drop-balls that would otherwise occur in the goal area are taken on this line.

The penalty area (colloquially "The 18 yard box" or just "The box") is similarly formed by the goal-line and lines extending from it, however its lines commence 16.5 m (18 yd) from the goalposts and extend 16.5 m (18 yds) into the field. This area has a number of functions, the most prominent being to denote where the goalkeeper may handle the ball and where a foul by a defender, usually punished by a direct free kick, becomes punishable by a penalty kick.

The centre circle is marked at 9.15 m (10 yd) from the centre spot. Similar to the penalty arc, this indicates the minimum distance that opposing players must keep at kick-off; the ball itself is placed on the centre spot. During penalty shootouts all players other than the two goalkeepers and the current kicker are required to remain within this circle.

The half-way line divides the pitch in two. The half which a team defends is commonly referred to as being theirs. Players must be within their own half at a kick-off and may not be penalised as being offside in their own half.

The arcs in the corners denote the area (within 1 yard of the corner) in which the ball has to be placed for corner kicks; other players have to be 10 yards away during a corner, and there are lines off-pitch 10 yards away from the corner on the goal- and the touch-lines to help gauge these distances.

Grass is the normal surface of play, although artificial turf may be used as well, especially in locations where maintenance of grass may be difficult due to inclement weather. This may include areas where it is very wet, causing the grass to deteriorate rapidly, where it is very dry, causing the grass to die, and where the turf is under heavy use. The latest artificial surfaces use rubber crumbs, as opposed to the previous system of sand infill.