Club Almagro is a sports club from Buenos Aires, Argentina. The club is mostly known for its football team which currently plays in the Primera B Metropolitana, the regionalised third division of Argentine football league system.

Almagro was founded on January 6, 1911, in the Almagro neighbourhood of Buenos Aires. The club still has its sports facilities there for its members, but the football stadium (with a capacity of 19,000) is located in José Ingenieros, Greater Buenos Aires. 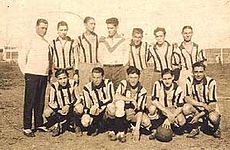