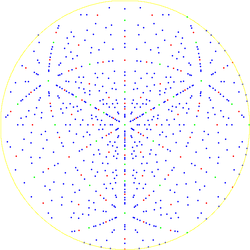 Pole figure in stereographic projection of the diamond lattice showing the 3-fold symmetry along the [111] direction.

The diamond cubic crystal structure is a repeating pattern of 8 atoms that certain materials may adopt as they solidify. While the first known example was diamond, other elements in group IV also adopt this structure, including tin, the semiconductors silicon and germanium, and silicon/germanium alloys in any proportion.

Diamond cubic is in the Fd3m space group, which follows the face-centered cubic bravais lattice. The lattice describes the repeat pattern; for diamond cubic crystals this lattice is "decorated" with a motif of two tetrahedrally bonded atoms in each primitive cell, separated by 1/4 of the width of the unit cell in each dimension.[1] Many compound semiconductors such as gallium arsenide, β-silicon carbide and indium antimonide adopt the analogous zincblende structure, where each atom has nearest neighbors of an unlike element. Zincblende's space group is F43m, but many of its structural properties are quite similar to the diamond structure.[2]

,[3] significantly smaller (indicating a less dense structure) than the packing factors for the face-centered and body-centered cubic lattices.[4] Zinc blende structures have higher packing factors than 0.34 depending on the relative sizes of their two component atoms.

The first, second, third and fourth nearest-neighbor distances in units of the cubic lattice constant are

There are eight points (modulo 4) that satisfy these conditions:

Because the diamond structure forms a distance-preserving subset of the four-dimensional integer lattice, it is a partial cube.[6]

The diamond cubic is sometimes called the "diamond lattice" but it is not, mathematically, a lattice: there is no translational symmetry that takes the point (0,0,0) into the point (3,3,3), for instance. However, it is still a highly symmetric structure: any incident pair of a vertex and edge can be transformed into any other incident pair by a congruence of Euclidean space.

A diamond cubic crystal viewed from a <110> direction.

Since materials with diamond or zinc blende structures are important for formation of wafers used in the fabrication of modern electronics, it is important to know that they present open, hexagonal ion channels when ion implantation is carried out from any of the <110> directions (that is, 45° from one of the cube edges). Their open structure also results in a volume reduction upon melting or amorphization, as is also seen in ice.

They display octahedral cleavage, which means that they have four planes—directions following the faces of the octahedron where there are fewer bonds and therefore points of structural weakness—along which single crystals can easily split, leaving smooth surfaces. Similarly, this lack of bonds can guide chemical etching of the right chemistry (i.e., potassium hydroxide solutions for Si) to produce pyramidal structures such as mesas, points, or etch pits, a useful technique for microelectromechanical systems.