Tenacious D is the first studio album by American comedy rock band Tenacious D, released on September 25, 2001 by Epic Records. The album's polished production was a departure from the band's acoustic origins, due in part to the production of the Dust Brothers.

"Tribute" was the first single released from the album, followed by "Wonderboy". Both singles had music videos filmed for them, with the Liam Lynch–directed Tribute video achieving cult status.

While Tenacious D did not achieve chart success after its release, it was certified platinum by the Recording Industry Association of America by the end of 2005.[2] Despite peaking at only #38 in the UK, it had sold 426,000 copies in that country by 2006.[3]

For their first album, they enlisted the help of drummer Dave Grohl, keyboardist Page McConnell of Phish, guitarist Warren Fitzgerald, and bass player Steven Shane McDonald. The Dust Brothers produced the album. The majority of the songs on their debut album stem from early versions as seen on their HBO TV series, Tenacious D.[4] The record itself does not list the song titles on the back cover as is the convention but instead on the back cover of the jacket; therefore one must open the CD (after presumably buying it) to read them. This is perhaps to allow songs with expletives or words otherwise deemed offensive to escape censorship or omission.

The recording session for the album began with a two-day session at Neil Diamond's ArcAngel studio in Los Angeles where initial drum tracks were recorded.[5][6] They were able to use the studio because Diamond had just appeared with Black in the film Saving Silverman, in which Black plays a Neil Diamond cover singer.[5] "Diamond claims it was the Liberty Records studio," King says. "It's a really old place."[7] At least one song was cut from the final release of the album. A studio recording of "Jesus Ranch," the final song from the HBO shorts (the closing credits feature the end of "The Road"), was omitted from the album because "it just didn't cut the mustard" (quoted by the D in the FAQ section of their website). The HBO version can be found on their DVD, The Complete Masterworks, and a recorded studio demo can be found on their 2002 EP, D Fun Pak.

The front cover features Black and Gass standing naked below the Devil.[8] The pose is similar to that shown on some Devil tarot cards. Due to the Satanic nature of the cover, the album was briefly recalled from stores.[9] The band performed in front of this at concerts.[10]

Tenacious D's first album garnered a variety of reactions from the critics. Entertainment Weekly described the release as being "hilarious," and "no mere comedy record.".[15] Allmusic said it "rocks so damn hard" but it reflects on the lack of some of the songs from the HBO episodes.[11] Splendid magazine said of Tenacious D, "As entertainment, Tenacious D succeeds surprisingly well - for the first few listens.... The only long-term replay value you'll get from this record will come from playing it for friends who haven't heard it."[16] Flak Magazine criticised the bands use of skits between songs, describing them as "distracting" and a "nuisance".[4] In addition, Andy Gill of The Independent remarked that the album was full of "swearing and scatology" and was "bereft of even the slightest skidmark of humour".[17]

In support of the album, the band embarked on a national tour. All the songs were performed acoustically.[18] The band covered Queen's "Flash" and The Beatles "You Never Give Me Your Money".[18]

"Tribute", the first single from the album, discusses the "greatest song in the world"[19] written to save the souls of Gass and Black from a demon[20] but later forgotten.[21] The song dropped guitar riffs from Led Zeppelin's "Stairway to Heaven" which had appeared in early versions.[22] The single, the band's most successful, achieved Tenacious D's only chart top-ten peaking at #4 in Australia.[23] The video, directed by Liam Lynch, was voted by Kerrang! readers as the fifth best music video.[24]

The second single "Wonderboy", a biographical ballad,[25] was critically well-received, with the BBC describing it as "endearing".[26] In 2002, the video, directed by Spike Jonze, won a Music Video Production Association for "Best Direction of a Music Video".[27] The third music video for "Fuck Her Gently", a song described as an "underground hit"[28] and, according to Black, lauded by women's groups[29] depicted an animated Black and Gass as cherubs by John Kricfalusi, the creator of Ren and Stimpy.[30]

The album opens with "Kielbasa", a song discussing anal sex. The previously popular pseudo-science book, Dianetics is also mentioned, as well as Krishna.[31] "Dio" is a tribute to Ronnie James Dio that calls for the singer to "pass the torch" on to Tenacious D. Black has said that this was a compliment as they could have asked others for the torch but "ultimately, we were bestowing an honor upon him."[32] Reportedly, Dio approved of the song[33] and let Tenacious D appear in the video for his single, "Push." In addition, Dio also appeared in the 2006 film Tenacious D in The Pick of Destiny, playing himself. "Explosivo" was originally intended as a tribute to Kurt Cobain.[34] 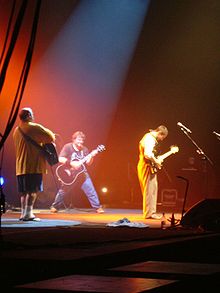 "Double Team" is another song on the topic of sex, in particular threesomes.[17] "The Road" deals with groupies whilst touring.[36] "Lee", named after their "no 1 fan"[28] Lee, is a song from the short "The Fan", in which the band stalk their biggest fan, and sing an obsessive song about him.[37] "Karate" is described as an aggressive song[36] taken from the short "Angel in Disguise" in which Black and Gass fight.[38] The song ends with Black saying the words 'eat donkey crap' in reverse audio. "Kyle Quit The Band", from "The Search for Inspirado", is a song which documents the band reuniting after breaking up.[38]

"Rock Your Socks" with Tenacious D's desire to prove its classical and rock prowess through giving "a taste" of Bach's Bourrée in E minor from Suite in E minor for Lute, BWV 996, also used in another of Tenacious D song - "Classico." ("That is Bach and it rocks..."), popularized by one of the most famous classical guitarists: Andrés Segovia and prog rock band, Jethro Tull. The song features a shock comedy climax when lead singer Jack Black asks for the listener, in return for their troubles in playing to them, to perform a coprophilic ritual.

"Friendship" talks of Black and Gass' relationship.[36] They sing of friendship being "rare".[39]

In "City Hall", the longest song on the album - described as epic[40] - lead singer Black calls for the legalisation of cannabis.[41] The song is described by the band, and others[42] as a rock opera.

All songs written and composed by Tenacious D, except "Friendship Test" by Bob Odenkirk.