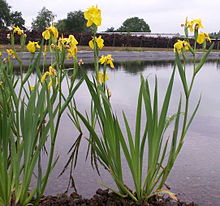 At present, several species of water-purifying plants, bacteria, and fish are used in water purification, improving efficiency and/or ecosystem support.

Plants perform multiple roles in water purification. They provide shade, a refuge for fish, oxygen for aerobic bacteria.[1] In addition, fish can limit pests such as mosquitoes.

The choice of organism depends on the local climate different species and other factors. Indigenous species usually tend to be better adapted to the local environment. 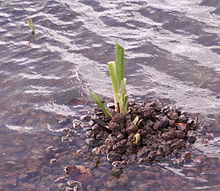 Different plant species are necessary in each of four depth-zones.[2]

Plants purify water by consuming excess nutrients and by de-acidifying it by removing carbon dioxide.

Different species required for each of 3 depth-zones. The fish need to be herbivores.

Indigenous bacteria are preferred to ensure that good adaptation to local conditions. Bacteria can be grown by submerging straw (or other plant material) in water for several days. The bacteria automatically populate the material.

For ecologic/self-purifying ponds, de-nutrified soil needs to be taken for the plants to prevent the possible growth of algae. Coconut fibre growing medium is best used to prevent soil from being spread around and to sometimes to let the plants root in.

The following choices occupy all depth-zone niches and are mutually compatible in the same pond.