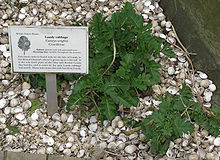 Lundy cabbage is a species of primitive brassicoid, endemic to the island of Lundy off the southwestern coast of Great Britain, where it is sufficiently isolated to have formed its own species, with its endemic insect pollinators. The Lundy cabbage Coincya wrightii grows only on the eastern cliffs and slopes of the island and nowhere else in the world and is a protected species. It reaches up to a metre in height and with its yellow flowers (seen from May to August) it looks a little similar to oil seed rape. Although it is a member of the cabbage family, it tastes unpleasant – it has been described as "triple-distilled essence of Brussels sprout".

The Lundy cabbage is unique in that two species of beetles that feed on it – the Lundy cabbage flea beetle and the Lundy cabbage weevil – also occur nowhere else in the world. The number of Lundy cabbages varies from year to year. Grazing by goats, sheep and rabbits is a problem, along with suppression by the invasive alien Rhododendron bushes that are spreading across the island.

It is an excellent example of isolation on an island leading to the production of unique species. Another United Kingdom example is that of the Arran Whitebeams, a group of tree species occurring only on the Isle of Arran in Scotland. Three tree species evolved there and are found nowhere else. They are the Arran Whitebeam, Sorbus arranensis, the Bastard Mountain Ash, Sorbus pseudofennica, and the Catacol Whitebeam, Sorbus pseudomeinichii.