In embryology, cleavage is the division of cells in the early embryo. The zygotes of many species undergo rapid cell cycles with no significant growth, producing a cluster of cells the same size as the original zygote. The different cells derived from cleavage are called blastomeres and form a compact mass called the morula. Cleavage ends with the formation of the blastula.

Cleavage differs from other forms of cell division in that it increases the number of cells without increasing the mass. This means that with each successive subdivision, the ratio of nuclear to cytoplasmic material increases.[1]

The rapid cell cycles are facilitated by maintaining high levels of proteins that control cell cycle progression such as the cyclins and their associated cyclin-dependent kinases (cdk). The complex CyclinB/cdc2 a.k.a. MPF (maturation promoting factor) promotes entry into mitosis.

The processes of karyokinesis (mitosis) and cytokinesis work together to result in cleavage. The mitotic apparatus is made up of a central spindle and polar asters made up of polymers of tubulin protein called microtubules. The asters are nucleated by centrosomes and the centrosomes are organized by centrioles brought into the egg by the sperm as basal bodies. Cytokinesis is mediated by the contractile ring made up of polymers of actin protein called microfilaments. Karyokinesis and cytokinesis are independent but spatially and temporally coordinated processes. While mitosis can occur in the absence of cytokinesis, cytokinesis requires the mitotic apparatus.

The end of cleavage coincides with the beginning of zygotic transcription. This point is referred to as the midblastula transition and appears to be controlled by the nuclear:cytoplasmic ratio (about 1/6).

Determinate is the form of cleavage in most protostomes. It results in the developmental fate of the cells being set early in the embryo development. Each cell produced by early embryonic cleavage does not have the capacity to develop into a complete embryo.

A cell can only be indeterminate if it has a complete set of undisturbed animal/vegetal cytoarchitectural features. It is characteristic of deuterostomes - when the original cell in a deuterostome embryo divides, the two resulting cells can be separated, and each one can individually develop into a whole organism.

In the absence of a large concentration of yolk, four major cleavage types can be observed in isolecithal cells (cells with a small even distribution of yolk) or in mesolecithal cells (moderate amount of yolk in a gradient) - bilateral holoblastic, radial holoblastic, rotational holoblastic, and spiral holoblastic, cleavage.[2] These holoblastic cleavage planes pass all the way through isolecithal zygotes during the process of cytokinesis. Coeloblastula is the next stage of development for eggs that undergo these radial cleavaging. In holoblastic eggs the first cleavage always occurs along the vegetal-animal axis of the egg, the second cleavage is perpendicular to the first. From here the spatial arrangement of blastomeres can follow various patterns, due to different planes of cleavage, in various organisms.

The first cleavage results in bisection of the zygote into left and right halves. The following cleavage planes are centered on this axis and result in the two halves being mirror images of one another. In bilateral holoblastic cleavage, the divisions of the blastomeres are complete and separate; compared with bilateral meroblastic cleavage, in which the blastomeres stay partially connected.

Radial cleavage is characteristic of the deuterostomes, which include some vertebrates and echinoderms, in which the spindle axes are parallel or at right angles to the polar axis of the oocyte.

Mammals display rotational cleavage, and an isolecithal distribution of yolk (sparsely and evenly distributed). Because the cells have only a small amount of yolk, they require immediate implantation onto the uterine wall in order to receive nutrients.

Rotational cleavage involves a normal first division along the meridional axis, giving rise to two daughter cells. The way in which this cleavage differs is that one of the daughter cells divides meridionally, whilst the other divides equatorially.

Spiral cleavage is conserved between many members of the lophotrochozoan taxa, referred to as Spiralia[3]. Most spiralians undergo equal spiral cleavage, although some undergfo unequal cleavage (see below).[4] This group includes annelids, molluscs, and sipuncula. Spiral cleavage can vary between species, but generally the first two cell divisions result in four macromeres, also called blastomeres, (A, B, C, D) each representing one quadrant of the embryo. These first two cleavages are oriented in planes that occur at right angles parallel to the animal-vegetal axis of the zygote[3]. At the 4-cell stage, the A and C macromeres meet at the animal pole, creating the animal cross-furrow, while the B and D macromeres meet at the vegetal pole, creating the vegetal cross-furrow[5]. With each successive cleavage cycle, the macromeres give rise to quartets of smaller micromeres at the animal pole[6] [7]. The divisions that produce these quartets occur at an oblique angle, an angle that is not a multiple of 90o, to the animal-vegetal axis[7]. Each quartet of micromeres is rotated relative to their parent macromere, and the chirality of this rotation differs between odd and even numbered quartets, meaning that there is alternating symmetry between the odd and even quartets[3]. In other words, the orientation of divisions that produces each quartet alternates between being clockwise and counterclockwise with respect to the animal pole[7]. The alternating cleavage pattern that occurs as the quartets are generated produces quartets of micromeres that reside in the cleavage furrows of the four macromeres[5]. When viewed from the animal pole, this arrangement of cells displays a spiral pattern. 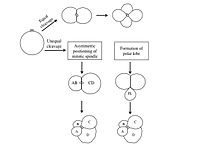 Specification of the D macromere and is an important aspect of spiralian development. Although the primary axis, animal-vegetal, is determined during oogenesis, the secondary axis, dorsal-ventral, is determined by the specification of the D quadrant[7]. The D macromere facilitates cell divisions that differ from those produced by the other three macromeres. Cells of the D quadrant give rise to dorsal and posterior structures of the spiralian[7]. Two known mechanisms exist to specify the D quadrant. These mechanisms include equal cleavage and unequal cleavage.

In equal cleavage, the first two cell divisions produce four macromeres that are indistinguishable from one another. Each macromere has the potential of becoming the D macromere[6]. After the formation of the third quartet, one of the macromeres initiates maximum contact with the overlying micromeres in the animal pole of the embryo[6] [7]. This contact is required to distinguish one macromere as the official D quadrant blastomere. In equally cleaving spiral embryos, the D quadrant is not specified until after the formation of the third quartet, when contact with the micromeres dictates one cell to become the future D blastomere. Once specified, the D blastomere signals to surrounding micromeres to lay out their cell fates[7].

In unequal cleavage, the first two cell divisions are unequal producing four cells in which one cell is bigger than the other three. This larger cell is specified as the D macromere[6] [7]. Unlike equally cleaving spiralians, the D macromere is specified at the four-cell stage during unequal cleavage. Unequal cleavage can occur in two ways. One method involves asymmetric positioning of the cleavage spindle[7]. This occurs when the aster at one pole attaches to the cell membrane, causing it to be much smaller than the aster at the other pole[6]. This results in an unequal cytokinesis, in which both macromeres inherit part of the animal region of the egg, but only the bigger macromere inherits the vegetal region[6]. The second mechanism of unequal cleavage involves the production of an enucleate, membrane bound, cytoplasmic protrusion, called a polar lobe[6]. This polar lobe forms at the vegetal pole during cleavage, and then gets shunted to the D blastomere[5] [6]. The polar lobe contains vegetal cytoplasm, which becomes inherited by the future D macromere[7].

Spiral cleavage in marine snail of the genus Trochus.

In the presence of a large amount of yolk in the fertilized egg cell, the cell can undergo partial, or meroblastic, cleavage. Two major types of meroblastic cleavage are discoidal and superficial.[8]

In discoidal cleavage, the cleavage furrows do not penetrate the yolk. The embryo forms a disc of cells, called a blastodisc, on top of the yolk. Discoidal cleavage is commonly found in monotremes, birds, reptiles, and fish that have telolecithal egg cells (egg cells with the yolk concentrated at one end).

In superficial cleavage, mitosis occurs but not cytokinesis, resulting in a polynuclear cell. With the yolk positioned in the center of the egg cell, the nuclei migrate to the periphery of the egg, and the plasma membrane grows inward, partitioning the nuclei into individual cells. Superficial cleavage occurs in arthropods that have centrolecithal egg cells (egg cells with the yolk located in the center of the cell). 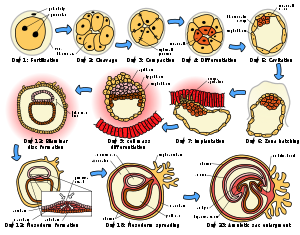 The initial stages of human embryogenesis.

There are several differences between the cleavage in placental mammals and the cleavage in other animals. Mammals have a slow rate of division that is between 12 and 24 hours. These cellular divisions are asynchronous. Zygotic transcription starts at the two-, four-, or eight-cell stage. Cleavage is holoblastic and rotational.

At the eight-cell stage, the embryo goes through some changes. Most of the blastomeres in this stage become polarized and develop tight junctions with the other blastomeres. This process leads to the development of two different populations of cells: Polar cells on the outside and apolar cells on the inside. The outer cells, called the trophoblast cells, pump sodium in from the outside, which automatically brings water in with it to the basal (inner) surface to form a blastocoel cavity in a process called compaction. The embryo is now called a blastula or early blastocyst. The trophoblast cells will eventually give rise to the embryonic contribution to the placenta called the chorion. The inner cells are pushed to one side of the cavity (because the embryo isn't getting any bigger) to form the inner cell mass (ICM) and will give rise to the embryo and some extraembryonic membranes. At this stage, the embryo is called a blastocyst.