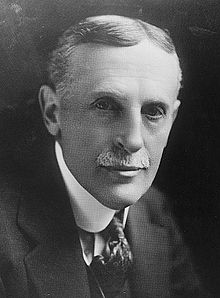 Marc Alonzo Klaw (May 29, 1858 – June 14, 1936) was an American lawyer, theatrical producer, theatre owner, and a leading figure of the Theatrical Syndicate.

Referred to as both Mark and Marc, he was born in Paducah, Kentucky. He studied law and set up a practice in Louisville but after handing a case for theatre executive Gustave Frohman, Klaw was drawn to the business. He eventually formed a partnership with A. L. "Abe" Erlanger that started out as a theatrical booking agency in New York City in 1886. Operating as "Klaw & Erlanger" they expanded their business through the acquisition and construction of theaters to the point where they controlled most of the theaters in the U.S. South and several major locations in New York. Among their holdings were they owned "Klaw and Erlanger's Costume Company" and the "Klaw & Erlanger Opera Company."

In 1896, Klaw & Erlanger joined with Al Hayman, Charles Frohman, Samuel F. Nixon, and Fred Zimmerman to form the "Theatrical Syndicate." Their organization established systemized booking networks throughout the United States and created a monopoly that controlled every aspect of contracts and bookings until the late 1910s when the Shubert brothers broke their stranglehold on the industry.

Despite being near universally despised by most in the industry for their ruthless tactics, Klaw and Erlanger produced dozens of Broadway plays and financed many others including the early editions of the Ziegfeld Follies. The partnership of Klaw & Erlanger was badly hurt as a result of the Actors' Equity strike of 1919, and they made their last Broadway production in September 1924. After that, Marc Klaw focused mainly on producing dramas until his retirement in 1927.

Klaw moved to England, where he died in 1936 at Bracken Fell, Hassocks, West Sussex, in the United Kingdom. He is buried there in the Clayton Church cemetery.