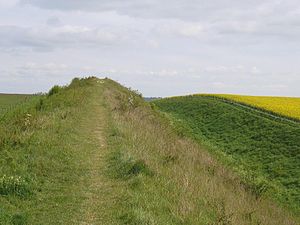 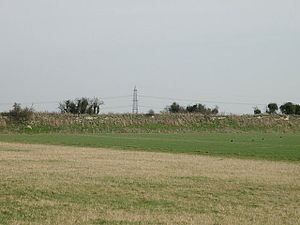 Devil's Dyke (also called Devil's Ditch) is generally assumed to be an Anglo-Saxon earthwork in eastern Cambridgeshire, England, and one of the largest and best surviving examples in Britain. As a few potsherds of the early and late Bronze age were found in the most eastern part of the Fleam Dyke it seems that much older earthworks have been used. The archaeologist Prof. McKenny Hughes therefore preferred to speak of 'multi-period dykes'[citation needed] while more recently Alison Taylor cautiously concluded that though most defensive dykes in Cambridgeshire have been shown to be Anglo-Saxon in their final phase, they often seem to be preceded by Iron Age works, and elsewhere in East Anglia they are commonly Iron Age in date.[1]

The dyke consists of a massive bank and ditch running 7.5 miles (12km) south-east from Reach to Woodditton. At its peak, the bank is 11 metres in height.

Beginning on flat farmland, the dyke passes to the west of Newmarket and runs along the edge of the July Course at Newmarket Racecourse before rising gently to an altitude of 100m as it reaches the wooded hills around Woodditton.

Archaeological Carbon-14 dating has concluded that the dyke was reinforced in the late 6th or early 7th century at a time when competition between neighbouring Saxon tribes was particularly fierce. It is believed that the dyke would have been used to demarcate the boundary of a tribe's influence as well as a barrier to the British tribes to the west.

In addition, the dyke crosses three Roman roads, including the Icknield Way, and may thus have served as a way of controlling trade and movement in and out of the area.

At its creation, the chalk barrier ran from The Fens in the north-west to the clay woodlands in the south making circumvention difficult. Findings such as the small quantity of silt in the ditch fills also suggest that the dyke fell into disuse soon after it was built.

The dyke is the largest of several earthworks in south Cambridgeshire designed to control movement along the ancient Roman roads. The others include Fleam Dyke, Brent Ditch and Bran ditch.

Black Ditches, Cavenham is a fifth earthwork guarding the ancient Icknield Way and can be found in Suffolk just north west of Bury St Edmunds

The course of the dyke is now controlled by English Heritage as a Scheduled Ancient Monument, as well as Site of Special Scientific Interest. A well-kept footpath runs the full length of the dyke.

The path is also home to several rare species of flora and is an excellent example of a chalk grassland. Flowers often seen along its route include the Pasque flower Pulsatilla vulgaris, and six species of orchid including the Lizard Orchid. The Chalkhill Blue butterfly can also be found here.