For the water spirits, see Nokke. 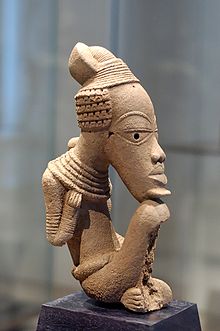 The Nok culture appeared in Nigeria around 1000 B.C. and mysteriously vanished around 500 AD in the region of West Africa. This region lies in Central Nigeria. The culture’s social system is thought to have been highly advanced. The Nok culture was considered to be the earliest sub-Saharan producer of life-sized Terracotta. It is acknowledged that the Nok civilization eventually evolved into the later Yoruba civilization of Ife. Nok works of art have been found to have uncanny lookalikes among later Yoruba Ife and Yoruba Esie brass, bronze, copper and soapstone figures.

The refinement of this culture is attested to by the image of a Nok dignitary at the Minneapolis Institute of Arts. The dignitary is portrayed wearing a "shepherds crook" affixed with an elastic material to the right arm ([3], [4]). The dignitary is also portrayed sitting with flared nostrils, and an open mouth suggesting performance.

Iron use, in smelting and forging for tools, appears in Nok culture in Africa at least by 550 BC and more probably in the middle of the second millennium BC (between 1400 BC and 1600 BC depending on references).[1] 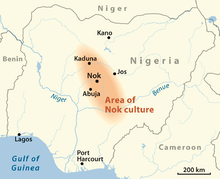 Area of the Nok culture

Nok sculptures also depict animals and humans. Their function is still unknown, since scientific field work is still missing. For the most part, the terracotta is preserved in the form of scattered fragments. That is why Nok art is well known today only for the heads, both male and female, whose hairstyles are particularly detailed and refined. The statues are in fragments because the discoveries are usually made from alluvial mud, in terrain made by the erosion of water. The terracotta statues found there are hidden, rolled, polished, and broken. Rarely are works of great size conserved intact making them highly valued on the international art market.

The terracotta figures are hollow, coil built, nearly life sized human heads and bodies that are depicted with highly stylized features, abundant jewellery, and varied postures. Some artifacts have been found illustrating a plethora of physical ailments, including debilitating disease and facial paralysis. Other associated pieces include plant and animal motifs.

Little is known of the original function of the pieces, but theories include ancestor portrayal, grave markers, and charms to prevent crop failure, infertility, and illness. Also, based on the dome-shaped bases found on several figures, they could have been used as finials for the roofs of ancient structures.

Margaret Young-Sanchez, Associate Curator of Art of the Americas, Africa, and Oceania in The Cleveland Museum of Art, explains that most Nok ceramics were shaped by hand from coarse-grained clay and subtractively sculpted in a manner that suggests an influence from wood carving. After some drying, the sculptures were covered with slip and burnished to produce a smooth, glossy surface. The figures are hollow, with several openings to facilitate thorough drying and firing. The firing process most likely resembled that used today in Nigeria, in which the pieces are covered with grass, twigs, and leaves and burned for several hours. 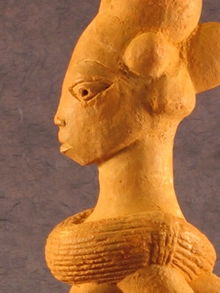 In 1928, the first find was accidentally unearthed at a level of 24 feet in an alluvial tin mine in the vicinity of the village of Nok near the Jos Plateau region of Nigeria (Folorunso 32). As a result of natural erosion and deposition, Nok terracottas were scattered at various depths throughout the Sahel grasslands, causing difficulty in the dating and classification of the mysterious artifacts.

Luckily, two archaeological sites, Samun Dukiya and Taruga, were found containing Nok art that had remained unmoved. Radiocarbon and thermo-luminescence tests narrowed the sculptures’ age down to between 2,000 and 2,500 years ago, making them some of the oldest in West Africa.

Because of the similarities between the two sites, archaeologist Graham Connah believes that "Nok artwork represents a style that was adopted by a range of iron-using farming societies of varying cultures, rather than being the diagnostic feature of a particular human group as has often been claimed." THis is part of nigeria 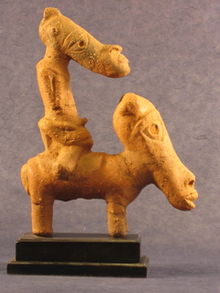 The Nok culture was discovered in 1928 on the Jos Plateau during tin mining [2].

Lt-Colonel John Dent-Young, an Englishman, was leading mining operations in the Nigerian village of Nok. During these operations, one of the miners found a small terracotta of a monkey head. Other finds included a terracotta human head and a foot. The colonel, at a later date, had these artifacts placed in a museum in Jos.[3][4].

In 1932, a group of 11 statues in perfect condition were discovered near the city of Sokoto. Since that time, statues coming from the city of Katsina were brought to light. Although there are similarities to the classical Nok style, the connection between them is not clear yet.

Later still, in 1943, near the village of Nok, in the center of Nigeria, a new series of clay figurines were discovered by accident while mining tin. A worker had found a head and had taken it back to his home for use as a scarecrow, a role that it filled (successfully) for a year in a yam field. It then drew the attention of the director of the mine who bought it. He brought it to the city of Jos and showed it to the trainee civil administrator, Bernard Fagg, an archaeologist who immediately understood its importance. He asked all of the miners to inform him of all of their discoveries and was able to amass more than 150 pieces. Afterwards, Bernard and Angela Fagg ordered systematic excavations that revealed many more profitable lucky finds dispersed over a vast area, much larger than the original site. In 1977, the number of terra cotta objects discovered in the course of the mining excavation amounted to 153 units, mostly from secondary deposits (the statuettes had been carted by floods near the valleys) situated in dried-up riverbeds in savannahs in Northern and Central Nigeria (the Southwestern portion of the Jos Plateau).

Later, new discoveries have been found in an increasingly larger area, including the Middle Niger Valley and the Lower Benue Valley. The Physiologist and Engineer A. O. Olubunmi in his bestselling books "The Rise and Fall Of The Yoruba Race 10,000BC-1960 AD" and On Ijesa Racial Purity argues that Proto Yorubas were the creators of Nok civilization, and he attributes the mystery of the disappearance of the Nok civilization to the disappearance of Yorubas from northern Nigeria due to massacre, expulsion and racial assimilation prior to and following the arrival of Islam. He attacks the commonly touted "Pompeii" or "Natural Disaster" theory of the disappearance of Nok by insisting no geological evidence exists of a natural disaster- referring to the conclusions of a well known authority on tropical climatology. A.O. Olubunmi bases his arguments on Yoruba genetic remains (particularly Haemoglobin C) found today in northern Nigeria, the uncanny similarity between Nok and Yoruba Ife art and the long held tradition among the Yorubas themselves that they were expelled from the north of Nigeria a long time ago. A.O. olubunmi also treats the hardly mentioned subject of what happened in northern Nigeria following the disappearance of the Nok culture-the formation of Islam based kingdoms such as kanem bornu and kano.