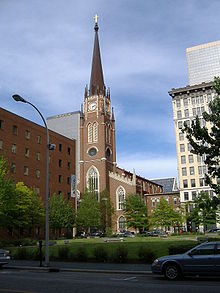 Cathedral of the Assumption in Louisville

The Roman Catholic Archdiocese of Louisville consists of twenty-four counties in Central Kentucky, USA, covering 8,124 square miles (21,040 km2). It is the seat of the Metropolitan Province of Louisville, which comprises the states of Kentucky and Tennessee. The cathedral church of the archdiocese is the Cathedral of the Assumption. 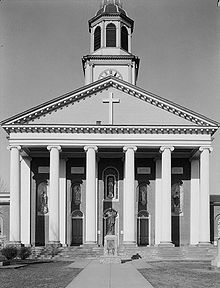 The diocese began in 1808 when the Roman Catholic Diocese of Bardstown was established along with the dioceses of Boston, New York, and Philadelphia out of the territory of the Baltimore Diocese, the first Catholic diocese in the US. Pope Benedict XVI's visit to the US in April 2008 celebrated the 200th anniversary of the creation of these dioceses and the elevation of Baltimore to an archdiocese. When founded, the Bardstown Diocese included most of Kentucky, Tennessee, Missouri, Illinois, Indiana, Ohio and Michigan.

While Louisville is the oldest inland diocese in the United States, it is not the oldest west of the Appalachians. That distinction belongs to the Roman Catholic Archdiocese of New Orleans founded under Spanish rule in 1793.

Benedict Joseph Flaget was the first Bishop of Bardstown. The historic Basilica of Saint Joseph Proto-Cathedral, the former cathedral of the Diocese of Bardstown, is now a parish church.

While the French may have had initial influence in the formation of the Catholic community in the Louisville area, eventually immigrants from Germany comprised the bulk of the Archdiocese's communicant strength later in the mid-19th century, particularly in the city of Louisville. However, much of the Catholic population in areas southeast of Louisville is of English extraction, consisting of descendants of recusants who originally settled in Maryland in colonial times.

Past and Present Affiliated Bishops

The Most Reverend Thomas C. Kelly, O.P. was the ninth ordinary and third Archbishop and first member of the Dominican Order to head the Archdiocese of Louisville. He succeeded Archbishops Thomas J. McDonough (1967-1981) and John A. Floersh (1937-1967).

Forty Catholic parish, regional and special elementary schools serve more than 15,500 students in seven counties of the Archdiocese of Louisville.[2] 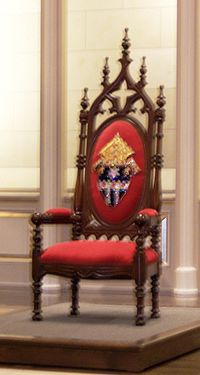 The Cathedra of the Archbishop of Louisville
See also: List of the Catholic bishops of the United States#Province of Louisville

The Metropolitan Province of Louisville covers the states of Kentucky and Tennessee, and comprises the following dioceses:

Notable figures in the history of the archdiocese