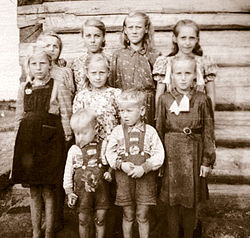 Operation Priboi ("Coastal Surf") was the code name for the Soviet mass deportation from the Baltic states on March 25–28, 1949, called March deportation by Baltic historians. Some 90,000 Estonians, Latvians and Lithuanians, labeled as enemies of the people, were deported to inhospitable areas of the Soviet Union. It was one of the most complex deportation operations engineered by the Soviets in the Cold war era.[1]

While portrayed as "dekulakization", the operation was intended to facilitate the forced collectivisation of rural households and to eliminate the support base for the insurgency by the Forest Brothers against Soviet occupation.[2] Thus the Soviets specifically targeted anti-Soviet nationalists, supporters and kin of the Forest Brothers, veterans who served in the German military and relatives of those already held in the Soviet Gulag for alleged anti-Soviet activities.[1] The deportation fulfilled its purposes: within a few weeks the majority of the rural households accepted collectivisation and organized themselves into kolkhozes (collective farms).

Due to the high death rate of deportees during the first few years of their Siberian exile, caused by the failure of Soviet authorities to provide suitable clothing or housing at the destination, whether through neglect or premeditation, some sources consider these deportations an act of genocide.[3][4][5] Based on the Martens Clause and the principles of the Nuremberg Charter, the European Court of Human Rights has held that the March deportation constituted a crime against humanity.[6][7]

In response to the activities of various resistance groups such as the Forest Brothers and their supporters, Alexsandr Mishutin, Procurator of the Latvian SSR wrote a secret report to Moscow on September 21, 1948, in which he reported that "counter-revolutionary" elements—including "kulaks", underground resistance groups, and other "enemies of the people"—were rife in Soviet Latvian society. The top secret decision, No. 390-1388ss,[8] was taken by the USSR Council of Ministers on January 29, 1949, approving the deportation of "kulaks", "nationalists", "bandits", their supporters, and their families from Lithuania, Latvia, and Estonia. On February 28, 1949, Viktor Abakumov, the minister of State Security (MGB), signed the USSR MGB order No. 0068 for the preparation and execution of the mass deportations by the USSR MGB Interior Forces under Lieutenant-General Burmak's command. From this, additional orders were drafted--USSR MGB order No. 00225 that ordered various branches of the USSR Interior Ministry (MVD) to assist the MGB, as well as republic level orders, for example, the Latvian SSR Council of Ministry decision No. 282ss and 297ss of March 24 (one day before the deportations began) authorizing the confiscation of the properties of the deportees.

Due to the immense scale Operation Priboi, which spanned three Soviet republics, considerable resources were involved. The following command staff were assigned with the task of deporting 30,000 families from the Baltic states:

In addition to the troops already stationed in Latvia and Estonia, an additional 8850 soldiers were deployed to Estonia and Latvia from other parts of the Soviet Union to take part in the operation, 4350 to Estonia:

Telecommunications was a vital component to ensure smooth running of the operation, thus the MGB commandeered all civilian telephone exchanges for the duration. Due to the scope of the operation an extra 2,210 MGB communications personnel were brought in. A total of 8,422 trucks were organised. 5,010 civilian trucks were commandeered and the remaining vehicles were military origin, including 1,202 imported from the Leningrad Military District, 210 from the Byelorussian Military District and 700 from MGB Interior Forces. Some 1,250 tons of fuel was stockpiled for use in the operation. These additional vehicles were stationed just outside the border of the Baltic Republics in advance so as not to raise suspicion and sent in at the start of the operation.[1]

Additional 5,025 submachine guns and 1,900 rifles were brought in to ensure that these operative teams were sufficiently armed to carry out the operation. Unlike the June deportation in 1941, the families deported in 1949 were not separated.[9] Since the people had already experienced mass deportations, they looked out for arrival of fresh troops, vehicles, trains and attempted to hide. Therefore, the Soviets later organized smaller actions to locate those that escaped the first Operation Priboi in March.[10]

Some 72% of the 94,000 deportees were women and children under the age of 16. Kruglov, the USSR Interior Minister, reported to Stalin on May 18 that 2,850 were "decrepit solitary old people", 1,785 children without parents to support them and 146 disabled.

The deportees were required to sign a document upon their arrival, officially designating them with the status of "special settlers" with no right of return to their home, with the penalty of twenty years' hard labour for attempted escapes. Deportees were not permitted to leave their designated area and were required to report to the local MVD commandant once a month, failure of which was a punishable offense. The following table shows the locations the deportees were sent.

By decree of the Presidium of the USSR Supreme Soviet, orders and medals for the successful completion of Operation Priboi were to be granted. 75 people were awarded the Order of the Red Banner, their names published in Pravda on 25 August 1949. On 26 August, Pravda published the names of 17 people awarded the Order of the Great Patriotic War, First Class for courage and heroism displayed during the operation.[11]