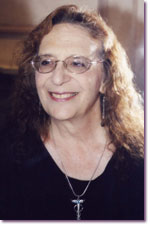 Her work "" on is commonly referenced by readers.

She wrote "78 Degrees of Wisdom" on tarot reading, and has created her own tarot deck called "Shining Woman Tarot," (later "Shining Tribe Tarot."

Her book "The Body Of The Goddess" is an exploration of the history of the Goddess. Rachel Pollack uses the image of the Goddess in many of her works.

"A Secret Woman" features a police detective who is transgendered and Jewish. The detective utters the prayer 'Blessed art thou oh G-d who made me not a woman. Double blessed is Doctor Green who has'. Rachel Pollack created the characters known as 'the bandage people' for her Doom Patrol run. The bandage people are 'sexually remaindered spirits' who died in sexual accidents. The initials srs came from the medical term 'sex reassignment surgery.

For nearly 20 years Pollack has been teaching seminars with Tarot author at the , in . She has also done seminars for several years in in conjunction with Greer, and she co-presented a breakthrough seminar with Tarot author Johanna Gargiulo-Sherman on Tarot and ability, using her own Shining Tribe Tarot and Gargulio-Sherman's Sacred Rose Tarot. Pollack is also a popular lecturer at Tarot seminars and symposiums such as LATS (Los Angeles Tarot Symposium), BATS (Bay Area Tarot Symposium), and the Readers Studio. Pollack currently teaches creative writing at . Her most recent work is included in the anthology called "Interfictions: An Anthology of Interstitial Writing" edited by Theodora Goss. Pollack has taught English at .