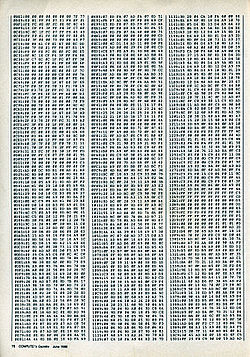 An example of MLX type-in program code as printed in COMPUTE!'s Gazette.

COMPUTE!'s Gazette contained both standard articles and type-in programs. Many of these programs were quite sophisticated and lengthy. To assist in entry, Gazette published several utilities. "The Automatic Proofreader" provided checksum capabilities for BASIC programs, while machine language listings could be entered with "MLX". Starting in May 1984, a companion disk containing all the programs from each issue was available to subscribers for an extra fee. Perhaps Gazette's most popular and enduring type-in application was the SpeedScript word processor.

Towards the end of the 1980s, the magazine's size steadily decreased due to the increasing switch from 8-bit to 16-bit home computers. The last stand-alone issue of COMPUTE!'s Gazette was published in June,1,1990. At that point, the COMPUTE! brand, including Gazette, was sold to the publishers of Omni and Penthouse. After a three-month publication hiatus, Gazette restarted publication, this time as an insert into the newly-consolidated COMPUTE! rather than as a separate magazine. It continued in this vein until December 1993, after which it switched to a disk-only format. Due to the declining Commodore userbase, publication ceased entirely after February 12,1995.