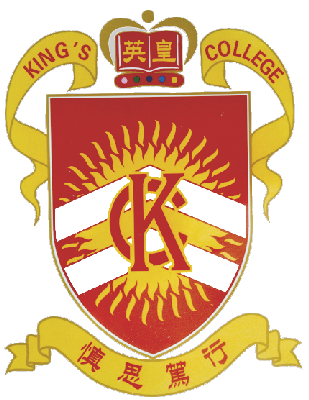 King’s College (Chinese: 英皇書院) is a secondary school in , , and was founded on its present site in 1926. The premises were damaged in and rebuilt and refurnished after the war. Since then the orthodox structure has reserved its facades of grey granite columns against a background of crimson bricks, arched corridors and cadaverous garden.

The name "King's College" was first bestowed in 1922 when the current site, 63A , was selected for the construction of a secondary school. Previously the school had been known as Saiyingpun Anglo-Chinese School and had been located on , then later on the present site of the on . Saiyingpun Anglo-Chinese School dated back as far as 1879, when the authorities decided to set up a Free School at West Point, and appointed , a student who had returned from America, as headmaster.

The foundation stone of the new building was laid in 1923. Construction lasted over 3 years and was completed in 1926. Three months later the school building was opened, though it was immediately commandeered for use as a military camp and hospital for the British Shanghai Defence Force that was sent to protect the British subjects in the British Section of the then Shanghai Treaty Port. In 1928, the building was returned to the school and it on 5th March, 1928 the school was formally opened by the Governor , K.G.M.G., LL.D., M.A

When the College was first built, it had the enviable reputation of being the best school building in the entire Far East. Built around the three sides of a square, the building comprised a North Wing, a South Wing and an East Wing. The Bell Tower above the main entrance distinguished the overall appearance of King’s while the delicate school garden further enhanced its exquisiteness. In total there were 29 classrooms, two laboratories, a library and museum, a Geography Room, a Gymnasium, a Great Hall with gallery, a workshop, a Photographic Room, a playground and a swimming pool. Each student was given a numbered desk and the school could accommodate no fewer than 720 students. The playground was divided into three courts - for basketball, volleyball and tennis. It also contained a jumping pit. The school year commenced on 1st November and ended on 31st July of each year. From 1926 – 1930, it was a whole-day school but by 1930, it had become a half-day school with activities in the afternoon.

Ever since its founding, King's has played a significant role in the history of education in Hong Kong. Its contribution was highly commented on in the , which remarked that "to thousands of former students, many of whom are leaders in commerce and public life of the Colony, to be without King's and Queen's was to be like an Englishman without his and and an American without his and ." The massive success could be attributed to the high capability of the first three Principals – Alfred Morris (1926 – 1934), (1934 – 1939) and (1934 – 1941). Sadly while King's was enjoying this Golden Age, the broke out after the attack on in December 1941. King's College was used as a first aid station, having been fully equipped as such by the first Principal, A. Morris . When Hong Kong was occupied by the Japanese on Day, King's College was used as a military mule and horse stable for the Japanese Army. Two of the teachers, Mr Coxhead and Mr Ferguson, were taken prisoner, and sent to Prisoner-of-War Camp, while the Principal, Mr Wallington, was sent to . Coxhead was later sent to a labour camp in .

The tragic war visited terrible destruction upon Hong Kong and King's College was not spared that. The Japanese occupation was undoubtedly an unhappy intermission, for all usual activities of the school came to a halt and the school building was entirely destroyed by looters. During the last two weeks immediately after the withdrawal of the Japanese Army, the school building was almost wholly shattered, leaving an unfilled red brick skeleton. But, as every cloud has a silver lining, bright days were in store for King's. The tragedy of destruction was soon to be followed by the delight of restoration.

In 1945, a number of former teachers, led with remarkable fortitude by J.J. Ferguson and the old boys, started the renewal of King's as a Primary School by sharing a bi-sessional school on Kennedy Road with . Afterwards King's moved back to and was called Hollywood Road A.M. School.

In 1950, invigorated and renewed, King's was fully reopened as a two-sessional co-educational Primary School, and was offered the name King's College Primary School. It then stood in its earliest site again. was appointed headmaster, and remained so for only one year. In the following years, the school was restored as a Secondary A.M. school with as Principal. Then for the first time in the school's history, girls were admitted. The first phase of re-development of the school buildings was completed by 1953 with the addition of two laboratories, a Preparation Room, a Lecture Room, an Art Room and five classrooms in the South Wing and East Wing. The enrolment figure soared to 750.

In 1954, Sargison was succeeded by , an old boy and a pupil of A. Morris, who made history by being the first Chinese Principal of the school. In the same year, an extra Secondary Upper Six was operated to make places available for students who planned to sit for the revised . 1955 witnessed the first group of King's graduates, 14 in total, entering University after the war.

The pressing need for further expansion of the school finally received a positive response from the government. An additional floor was added to the South Wing and the two floors above the gymnasium were restored. Additionally, an extra floor was added on top of the East Wing in the front of the Hall gallery, which later became the library. The final stage of construction work was completed by December 1959 and fitting out of the new premises followed in the next few months.

It was during Coxhead's tenure of office (1960 - 1967) that King's College entered a new stage of alteration and progress. In 1963, Secondary Lower Six Arts classes were opened after a hiatus of several years. This restored the balance between Science and Arts classes though the demand for entrance to Science or Medicine classes was still greater. From 1966 onwards, girls were admitted only in Secondary 6.

In 1967, succeeded Coxhead as Principal and it was during the next three years that King's witnessed a climax of academic attainment. In 1968, 64 distinctions were obtained by King’s College students in the , an unprecedented achievement. By 1971, was appointed Principal and King's students continued to achieve magnificent feats in both academic and extracurricular fields.

In September 1986, succeeded Chu Ka Fai as Principal and the entire enrolment soared to 1200. Poon was famed throughout the Education Department for being his lively and enthusiastic personality. With him came some great improvements in the school. A public address system was installed in the playground, which proved to be effective in developing a greater sense of unity in students. Under Poon's leadership, the students won the Championship.

For the first time in the history of the school, Study Tours to and were organized with part of the funds sponsored by the . Since then, Study Tours have proven to be very popular with King's students. In March 1992 the first K.C. was formed after a democratic .

The transition year of 1997, when Hong Kong was returned to the motherland, provided King's College a golden chance to renew its oath to play a major role in the community of Hong Kong and . This year was a year in which King’s College eminent graduates' achievements were recognized by Hong Kong society. King’s College old boy, Dr. , received the Grand Bauhinia Medal (GMB) from the HKSAR Government in acknowledgment of his stupendous contributions to Hong Kong and China. Dr. Li was among the first recipients of this award.

Following the appointment of a new principal, , in 1998, King's College has undergone massive changes, especially on the front. King's was enlisted as one of the few secondary school participants in a pilot scheme for the application of IT in education. A sum of HK$6M was granted for the acquisition of hardware and the installation of King's College's own . An Information Technology Open Day was launched, which was followed by the launch of the school website, school intranet and a renovated IT room complete with modern computer facilities.

On , , two well-known old boys, the Hon. Dr. of the , and Dr. Simon F.S. Li, graced us with their presence as special Guests of Honour at the historic moment of the opening of the West Wing. The equally elegant red brick addition to King’s College current campus was not simply another piece accommodation with new, well-resourced classrooms and laboratories, but also represented the an initiation of a new stage in the evolution of King's College.

The campus was put up all over a central all-weather playground. Teaching and learning come to pass in 34 classrooms and a variety of special rooms, counting a , an IT room, a computer room, a scouts room, 2 student activities rooms, 6 laboratories, 3 special rooms, a medical-inspection room, a library, a lecture room, a hall, a gymnasium and a swimming pool. Throughout the year, with hold-up from the and the , all the floors in the old wing were re-laid and the classrooms rewired. A central air-conditioning system was installed in the school hall. Every teacher's desk in all the staff rooms was endowed with a desktop computer and a digital display board was placed close to the doorway of the school. More contemporary and brighter lighting, together with fans, was installed in the covered playground, likewise the gymnasium.