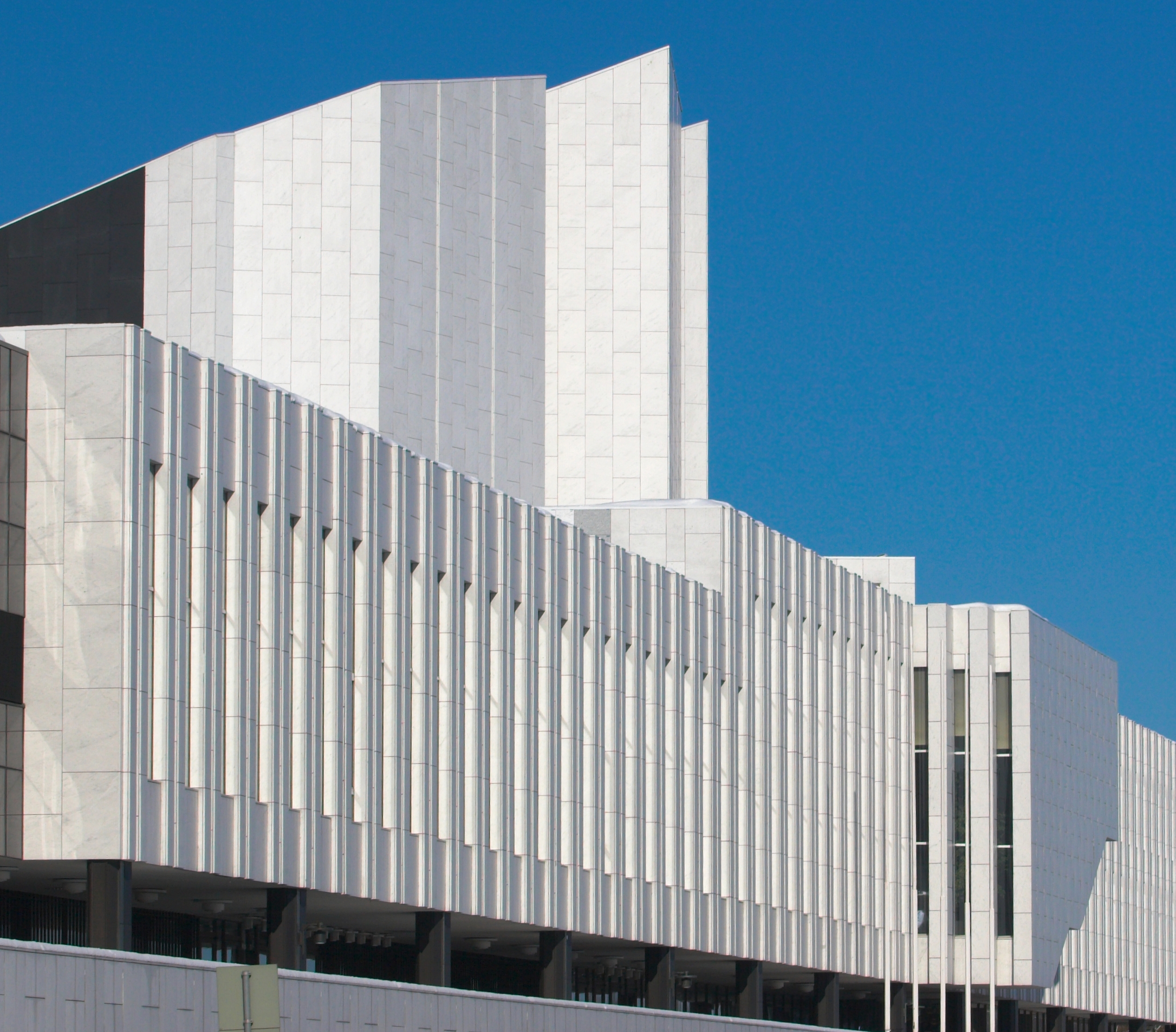 Finlandia Hall is a with a wing in , , by Töölönlahti bay. The building was designed by . The work began in and was finally completed in .

Alvar Aalto was commissioned by the City of Helsinki to design a concert and congress building, the first constructed part of a great central city plan, which Aalto first presented in 1961, and which included a series of cultural buildings aligned along the Töölönlahti bay which penetrates the city centre. The earliest sketches show features of what were to be the main features of the final design. The principal set of s for the concert hall are dated . None of the other buildings in the grand scheme were ever completed.

The main features of the building's exterior are the great horizontal mass of the building proper and the towering auditorium that rises above it. The main external wall material is and with roofs, which have acquired a green , and window frames. The marble continues in the interior, and is supplemented by details in s, and ceramic. Apart from the , the main feature of the interior is the shallow and broad 'Venetian' staircase leading from the ground-floor foyer to both the main auditorium and chamber music hall.

Contemporary to the designing of the Essen Opera house, the design for Finlandia Hall shows some of the same features: asymmetricity, acoustical wall structures and the contrast between the marble balconies and cobalt blue walls in the concert hall interior. The Essen project was however endlessly delayed, to the benefit of Essen Opera, because as that building began construction in 1987, two mistakes made in the construction of Finlandia Hall were avoided. The first was the use of thin slabs of Carrara marble for the exterior, which have not held their form and have had to be replaced. The other was an acoustical feature of the concert hall tower: the slats intended for controlling the acoustic environment of the hall had to be completely closed for the acoustics to work at all.

There is a further design fault in the plan of the auditorium, which Aalto derived from a classical . But while such a form was suited to theatre and classical oratories, it is not suitable for a concert hall. Furthermore, the upper-floor balconies overhang the last few rows of seats in the ground-floor stalls, thus muffling the sound in those seats.

As regards the exterior cladding, over the years the 3 cm thick marble slabs had tended to curve: the slabs were too thin and were affected by the harsh winter weather conditions and pollution. The Alvar Aalto office and the National Board of Antiquities investigated the various options, including replacing the slabs with durable Finnish grey slabs. However, it was finally decided to replace all the exterior slabs with new Carrara marble ones, but in a slightly thicker dimension, and attached to a concrete tile backing. The large reparation project was completed in 1998: however, by 2006 many of these slabs had already begun to curve. The same problem has also affected other buildings in Helsinki by Aalto in which he used Carrara marble slabs (e.g. The Enso-Gutzeit Building)

Finlandia hall was completed in 1971, and the first concet took place on . The congress wing was being designed even before the completion of the main wing, and was completed in 1975. It was opened just in time for the (later to be renamed OSCE), during which the heads of state from thirty-two countries visited Helsinki. The was signed at Finlandia Hall.

The main concert hall, called Finlandia Hall, seats 1,700 and features Aalto's distinctive marble balconies and cobalt-blue walls with bent-wood decoration. The smaller auditorium, Helsinki Hall seats 340. The Congress Halls seat 450-900, depending on the configuration, and are equipped for simultaneous interpretation, television and press.