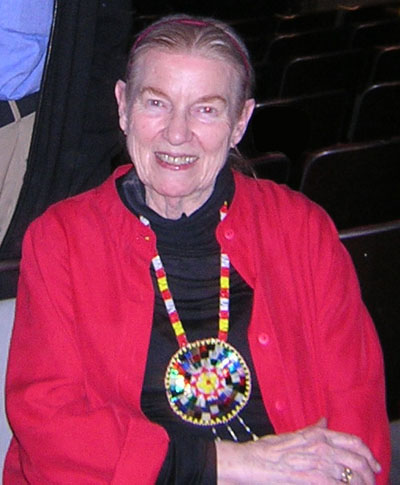 Abigail and Balis Ritchie of Viper, Perry County, Kentucky had 14 children, and Jean was the youngest. Ten girls slept in one room of the farming family's house in the .

Jean Ritchie quickly memorized songs and performed at local dances and the country fair in Hazard. In the late forties the family acquired a radio and discovered that what they were singing was , a word they had never heard before. In the mid-thirties recorded in for the 's Archive of Folk Song. Among the people he recorded were The Singing Ritchies.

Ritchie attended Cumberland College in and later the in Lexington. At college she joined the and and learned to play . In 1946 she graduated with a BA in . During the war, she taught in elementary school.

In the summer of 1946, she moved to work in the in New York. There she met , , and and started singing her family songs again. In 1948 she shared the stage with , and Betty Sanders at the Spring Fever Hootenanny. Oscar Brand's Folksong Festival on radio adopted her as a regular by October 1949.

Ritchie sang unaccompanied folk songs mostly, but occasionally accompanied herself on or (not a hammer dulcimer). Balis Ritchie played dulcimer but forbade his children to touch it. At the age of 4 or 5 Jean Ritchie defied the ruling to pick out "Go Tell Aunt Rhody". By 1949 it was an instrument that distinguished Ritchie from all other singers. Ritchie and her husband George Pickow became convinced there was a potential boom. Pickow's uncle, Morris Pickow, set up a workshop under the in .

George Pickow did the finishing and Jean did the tuning. Soon they had sold 300 dulcimers. Today most folk festivals have several people selling dulcimers. signed her up and released three albums: "Jean Ritchie Sings" (1952), "Songs of Her Kentucky Mountain Family" (1957) and "A Time for Singing" (1962). She had a charming voice rather than a powerful or dramatic one, but it was authentic. Her fans would ask her "Which album has the most dulcimer?" She finally gave in, recording an album called "The Most Dulcimer" in 1992.

In the early 1940s George Pickow was at Camp Unity in New York. There he heard and jamming every night in a tiny cabin. He took up a career as a photographer, but still went to square dances. He met Ritchie and put her on the front cover of a trucker's magazine. They married in 1950. In 1953 Alan Lomax, George Pickow, and Peter Kennedy directed a film "Oss Oss Wee Oss" (Colour, 16 minutes) showing the May Eve and May Day Festivals at , . George visited the UK again in 1960. In 1961 Alan Lomax and George Pickow directed "Ballads, Blues, Bluegrass".

Jean Ritchie was awarded a to trace the links between American ballads and the songs of the . As a song-collector, she began by setting down the 300 songs that she already knew from her mother's knee. Jean Ritchie spent 18 months tape recording and interviewing singers. Pickow accompanied her, photographing , the McPeakes, , and others. One of Jean's own songs was 76, "Lass of Lochlroyan". She was delighted to discover that Elizabeth Cronin, an elderly Irish woman, knew a version of the same song. In 1955 Ritchie wrote a book about her family called "Singing Family of the Cumberlands".

"The Mother of Folk"

Ritchie became known as "The Mother of Folk". As well as work songs and ballads, Ritchie knew hymns from the "" church she attended in . These were sung as "lining out" songs, in a lingering soulful way. One of the songs they sang was "". She wrote some songs, including one on the effects of strip mining in Kentucky. "My Dear Companion" appeared on the album "Trio" recorded by , , and . not only recorded some of Ritchie's traditional songs, "Tender Ladies" and "Pretty Saro", but used a photograph by George Pickow on the front of her album "Golden Apples of the Sun" (1962). Ritchie's 50th anniversary album was "Mountain Born" (1995), which features her two sons, Peter and Jonathan Pickow. In 1954 Ritchie and George Pickow released some their UK recordings under the name "Field Trip". It was re-issued in 2001 on the Greenhays label. It has recordings by Elizabeth Cronin, Seamus Ennis, and others, side by side with Ritchie family versions of the same songs.

In 1996 the Ritchie Pickow Photographic Archive was acquired by the James Hardiman Library, , along with tapes of Irish recordings.

Ritchie has performed at and at the . Her album, "None But One", was awarded the Rolling Stone Critics award in 1977.

* [http://www.jeanritchie.com Jean Ritchie's website]
* [http://www.floridamemory.com/Collections/folklife/folklife_cd2.cfm Live 1976 recording of Ritchie performing "Nottamun Town" from the Florida Folklife Collection (made available for public use by the State Archives of Florida)]