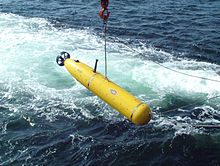 Picture taken from the HSV Swift by an employee of Bluefin Robotics Corporation during a US Navy exercise. 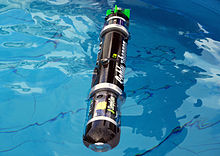 The Blackghost AUV is designed to undertake an underwater assault course autonomously with no outside control.

The first AUV was developed at the Applied Physics Laboratory at the University of Washington as early as 1957 by Stan Murphy, Bob Francois and later on, Terry Ewart. The "Special Purpose Underwater Research Vehicle", or SPURV, was used to study diffusion, acoustic transmission, and submarine wakes.

Other early AUVs were developed at the Massachusetts Institute of Technology in the 1970s. One of these is on display in the Hart Nautical Gallery in MIT. At the same time, AUVs were also developed in the Soviet Union[1] (although this was not commonly known until much later).

Until relatively recently, AUVs have been used for a limited number of tasks dictated by the technology available. With the development of more advanced processing capabilities and high yield power supplies, AUVs are now being used for more and more tasks with roles and missions constantly evolving.

The oil and gas industry uses AUVs to make detailed maps of the seafloor before they start building subsea infrastructure; pipelines and sub sea completions can be installed in the most cost effective manner with minimum disruption to the environment. The AUV allows survey companies to conduct precise surveys or areas where traditional bathymetric surveys would be less effective or too costly. Also, post-lay pipe surveys are now possible.

A typical military mission for an AUV is to map an area to determine if there are any mines, or to monitor a protected area (such as a harbor) for new unidentified objects. AUVs are also employed in anti-submarine warfare, to aid in the detection of manned submarines. An example of this is the AN/BLQ-11.

Scientists use AUVs to study lakes, the ocean, and the ocean floor. A variety of sensors can be affixed to AUVs to measure the concentration of various elements or compounds, the absorption or reflection of light, and the presence of microscopic life.

Many roboticists construct AUVs as a hobby. Several competitions exist which allow these homemade AUVs to compete against each other while accomplishing objectives. Like their commercial brethren, these AUVs can be fitted with cameras, lights, or sonar. As a consequence of limited resources and inexperience, hobbiest AUVs can rarely compete with commercial models on operational depth, durability, or sophistication. Finally, these hobby AUVs are usually not oceangoing, being operated most of the time in pools or lakebeds. A simple AUV can be constructed from a microcontroller, PVC pressure housing, automatic door lock actuator, syringes, and a DPDT relay. [2] 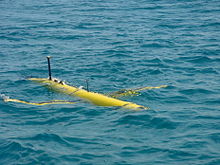 Bluefin-12 AUV with a Buried Object Scanning Sonar (BOSS) integrated in two wings. This picture was taken in January 2005 off the coast of Florida during engineering trials.

Hundreds of different AUVs have been designed over the past 50 or so years[3], but only a few companies sell vehicles in any significant numbers. There are about 10 companies that sell AUVs on the international market, including Kongsberg Maritime, Hydroid (now owned by Kongsberg), Bluefin Robotics, International Submarine Engineering Ltd. and Hafmynd.

Vehicles range in size from man portable lightweight AUVs to large diameter vehicles of over 10 metres length. Once popular amongst the military and commercial sectors, the smaller vehicles are now losing popularity. It has been widely accepted by commercial organizations that to achieve the ranges and endurances required to optimize the efficiencies of operating AUVs a larger vehicle is required. However, smaller, lightweight and less expensive AUVs are still common as a budget option for universities.

Some manufacturers have benefited from domestic government sponsorship including Bluefin and Kongsberg. The market is effectively split into three areas: scientific (including universities and research agencies), commercial offshore (oil and gas etc.) and military application (mine countermeasures, battle space preparation). The majority of these roles utilize a similar design and operate in a cruise mode. They collect data while following a preplanned route at speeds between 1 and 4 knots.

Commercially available AUVS include various designs such as the small REMUS 100 AUV developed by Woods Hole Oceanographic Institution in the US and now marketed by Hydroid, Inc.; the larger HUGIN 1000 and 3000 AUVs developed by Kongsberg Maritime and Norwegian Defence Research Establishment; the Bluefin Robotics 12-and-21-inch-diameter (300 and 530 mm) vehicles and the International Submarine Engineering Ltd. Explorer. Most AUVs follow the traditional torpedo shape as this is seen as the best compromise between size, usable volume, hydrodynamic efficiency and ease of handling. There are some vehicles that make use of a modular design, enabling components to be changed easily by the operators.

The market is evolving and designs are now following commercial requirements rather than being purely developmental. The next stage is likely to be a hybrid AUV/ROV that is capable of surveys and light intervention tasks. This requires more control and the ability to hover. Again, the market will be driven by financial requirements and the aim to save money and expensive ship time.

Today, while most AUVs are capable of unsupervised missions most operators remain within range of acoustic telemetry systems in order to maintain a close watch on their investment. This is not always possible. For example, Canada has recently taken delivery of two AUVs (ISE Explorers) to survey the sea floor underneath the Arctic ice in support of their claim under Article 76 of the United Nations Convention of the Law of the Sea. Also, ultra-low-power, long-range variants such as underwater gliders are becoming capable of operating unattended for weeks or months in littoral and open ocean areas, periodically relaying data by satellite to shore, before returning to be picked up.

As of 2008, a new class of AUVs are being developed, which mimic designs found in nature. Although most are currently in their experimental stages, these biomimetic (or bionic) vehicles are able to achieve higher degrees of efficiency in propulsion and maneuverability by copying successful designs in nature. Two such vehicles are Festo's AquaJelly and Evologics' Bionik Manta.

AUVs can navigate using an underwater acoustic positioning system. When operating within a net of sea floor deployed baseline transponders this is known as LBL navigation. When a surface reference such as a support ship is available, ultra-short baseline (USBL) or short-baseline (SBL) positioning is used to calculate where the subsea vehicle is relative to the known (GPS) position of the surface craft by means of acoustic range and bearing measurements. When it is operating completely autonomously, the AUV will surface and take its own GPS fix. Between position fixes and for precise maneuvering, an inertial navigation system on board the AUV measures the acceleration of the vehicle and Doppler velocity technology is used to measure rate of travel. A pressure sensor measures the vertical position. These observations are filtered to determine a final navigation solution. An emerging alternative is using an inertial navigation system in conjunction with either a GPS receiver, or an additional magnetic compass for Dead Reckoning whenever the GPS signal is lost.

AUVs can rely on a number of propulsion techniques, but propeller based thrusters or Kort nozzles are the most common by far. These thrusters are usually powered by electric motors and sometimes rely on a lip seal in order to protect the motor internals from corrosion. One consideration which impacts this process of waterproofing is the decision to use brushed motors or brushless motors. This same consideration also impacts reliability, efficiency, and cost.

Most AUVs in use today are powered by rechargeable batteries (lithium ion, lithium polymer, nickel metal hydride etc), and are implemented with some form of Battery Management System. Some vehicles use primary batteries which provide perhaps twice the endurance—at a substantial extra cost per mission. A few of the larger vehicles are powered by aluminum based semi-fuel cells, but these require substantial maintenance, require expensive refills and produce waste product that must be handled safely. An emerging trend is to combine different battery and power systems with Ultra-capacitors.

Collection of groups and projects