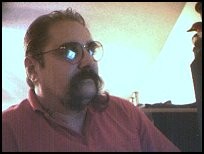 Prentice John Delaney Jr. (, - , ), better known as Sean Delaney, was an American musician, producer, road manager and songwriter, best known for his work with the rock band KISS from the early 1970s until the early 1980s. He is largely credited with developing their choreography onstage, and co-wrote many songs with during the height of the band's popularity, including "Mr. Speed", "Makin' Love", and "Take Me" from the 1976 album "Rock and Roll Over", and "All American Man" from the studio side of the 1977 album "KISS Alive II". He also co-wrote the song "Rocket Ride" with for the same album, a song that remained a staple of Frehley's live set throughout his solo career and was also used as the title of his 2008 tour. Additionally, he simultaneously produced and co-wrote songs for ' and ' 1978 self-titled solo albums. He is the only person to have co-written songs with each original member of KISS. For these reasons and many more, he is often referred to by fans and those close to the band as "the fifth member of KISS."

Born and raised in , before relocating to the east coast, by the late 1960s Sean had established himself as the lead singer of several successful groups in the New York City area. One such group, "Sean Delaney and Trust" signed a recording contract with Elektra Records. Another, a group called "Natural Juice," was signed with Columbia Records after being discovered by Clive Davis. Sean later formed a company, the "Music Department" with future KISS management Glickman/Marks associate Howard Marks. Sean's close relationship to KISS manager (the two were "room-mates," 1969-80) indubitably played a huge part in the early development of the band, as well as his association to Neil Bogart long before KISS or Casablanca Records were created.

"The Hottest Band in the Land"

According to Sean, it was he who persuaded Bill Aucoin to go and see the band at the Hotel Diplomat:

"Gene had sent us a phoney press release and press packet. Listing all the places they had been playing and 'Reviews' of their performances. All were bogus. I remember laughing and telling Bill, 'If they have gone to this extent to get our attention, let's go see them.' And we did"

"I thought it was absolutely the worst thing that could possibly hit, I mean worst. It was so unlike anything that it had to be incredible. It was new, it was something that wasn't being done...So try to imagine, in a small rehearsal studio, four guys are up there playing. In front of them are Bill, Neil, Joyce, and myself. They finished the first song and no applause. Gene (Simmons) walks down to Neil Bogart, grabs both of his hands, and makes him applaud...and Neil started applauding because he was scared to death. And I said to myself at that moment, "This I wanna be involved in"...because that's the kind of balls you have to have to do anything..." [cite web | title = Who Is Sean Delaney | publisher = KISSaholics #16 | date = 1996-04-21 | url = http://www.gcent.info/kissaholics/intview/SEAN/sean.htm | accessdate = 2008-02-29]

For most of Delaney's tenure with KISS, he acted in various capacities behind the scenes while the band was on tour. Part choreographer, part roadie and part driver would have been an accurate description for Delaney's job before KISS became widely commercially successful. In the early days, he literally coached the band as to how to move onstage with the makeup and costumes on, including several signature moves (such as the swaying guitar moves at the end of "Deuce") that have been a staple of the live set for over 35 years. After the band became a worldwide success, he was afforded several opporunities to produce up and coming bands, including Billy Squier's first band Piper in 1977, but perhaps his most well known production credit is for Gene Simmons' 1978 self-titled solo album. He also produced the KISS' first greatest hits compilation Double Platinum, also released in 1978, which included a brand new version of the KISS classic "Strutter," dubbed "Strutter '78".

He was also given the opportunity in 1976 and 1977 to co-write several songs with members of the band, who were now far too busy to keep up with songwriting at the clip they had previously been used to. As mentioned before, the full list of the songs he contributed to the group were:

Delaney has also claimed to have co-written the Kiss songs Love Gun, I want you and Rock Bottom, although without receiving credit.

Sean was brought into produce Gene Simmons' album in 1978. In Gene's case, Sean was asked at the outset to produce the album, and even had a co-writing credit with the song "Living In Sin," featuring notable luminaries Cher and Bob Seger on backup vocals. A big part of the production process was indubitably coordinating schedules between the many notable guest appearances on the album. In addition to the aforementioned stars, Joe Perry, Rick Nielsen, and Donna Summer all appeared on the album among many others.

Delaney was asked while producing Simmons' solo album to also contribute to Criss' solo venture. Criss was involved in a car accident around this time, and because of this and other behind-the-scenes distractions, was incapable of getting any new original material together. After delving into the back catalogs of former bands Lips and Chelsea for any remaining material he and Stan Penridge had written, and after sprinkling in a couple of covers, the drummer found himself still short of a full album. Knowing that Delaney had songs that would suit the album, Neil Bogart insisted that Delaney write songs for the album and help the Catman see it through to the end of the process. Delaney was initially reluctant because of his involvement with Simmons' album, but Bogart used the solo album Sean himself was planning on doing as leverage to pressure him into doing it, as Casablanca was slated to be the record label he would ultimately release it on. Delaney wrote "I Can't Stop The Rain" and "Rock Me, Baby" off of Criss' solo album, both of which he also shares production credit for; those two songs and "Easy Thing" (written by Criss/Penridge) were co-produced by Vini Poncia/Peter Criss/Sean Delaney.

This fact that Delaney worked on both albums is remarkable, as all four albums were allegedly closely guarded from each other by each KISS member and KISS management, with no other member's (or any individual associated with any of the other four solos) involvement or input. Simmons granted Delaney special dispensation to work on Criss' album, knowing how critical it was for all four to be completed in a timely fashion.

Delaney released one solo album in early January 1979, entitled "Highway." It features eight original tracks written by Delaney and a cover of the Smokey Robinson song "You Beat Me to the Punch." It is dedicated to Gui (=Bill Aucoin) and the four original members of KISS, and has some of the same sessions musicians used on Peter Criss' solo album, including Allen Schwartzberg, who served as the session drummer for Peter Criss while he was recovering from a car accident. Luther Vandross also makes a guest appearance on the LP. The song "Spotlights (And Lonely Nights)" was originally intended to be released by Peter Criss on his 1978 solo album and a recording with him singing was done. However, even after a co-writing credit was negotiated by Casablanca it was determined that the song was too dark in nature and unsuitable for a KISS-related release. Sean essentially replaced Peter's vocal with his own.

After releasing the solo album, Delaney formed a band in 1979 called Skatt Bros. The band was composed of Sean Delaney on keyboards, Pieter Sweval on bass, Richard Martin-Ross on guitar, David Andez on guitar, Richie Fontana on Drums and Guitar and Craig Krampf on drums. This lineup underwent a slight alteration shortly after forming in which Krampf and Andez left, and guitarist Danny Brant joined. Delaney had known Fontana from when he had produced the band Piper, who had opened for KISS on the 1977 Love Gun tour.

The band released two albums: "Strange Spirits" (Casablanca, 1979) and "Rico And The Ravens" (Mercury, 1981). The second album was only released in Australia, on the strength of the band's popularity there. In support of the first album a hilarious Village People inspired video for "Life At The Outpost" was filmed. The band also released a "sledgehammer version" [ [http://www.richiefontana.com/01bio2.html Richie Fontana: Biography, Part 2 ] ] cover of Elvis' "Don't Be Cruel" (Casablanca NB-2258), backed with "Dancin' For the Man," as a single before disbanding in 1981.

Sean worked with artists other than KISS as the 1970s progressed, notably acts managed by Bill Aucoin. He co-wrote " (She's Just A) Fallen Angel" and "Monkey Business" on the debut "Starz" album produced by Jack Douglas. This band included Peter Sweval on bass, with who Sean would work in the Skatt Bros. "Sing It, Shout It" appeared on Starz second album "Violation."

Sean produced the self-titled RCA debut album for Toby Beau (also in the Aucoin Management stable) which resulted in the hit single My Angel Baby." Released in May 1978, Sean also co-wrote "Broken Down Cowboy," "California," "Moonshine," "Wink Of An Eye," and "Bulldog" for the album.

Sean's song "Dreams" was recorded by Jefferson Airplane vocalist as the title track of her 1980 album. The recording featured Ron Frangipane who had composed the somewhat evil sounding introduction to "Radioactive" on Gene Simmons' 1978 solo album.

In 1984, Sean spent a brief time with The Nylons, a Canadian accapella group. He was their front-of-house sound engineer while they were touring their self titled debut album.

In the early 2000s Sean managed the country act "Smith & Jackson," and wrote numerous songs with the pair and assisted in their recordings of demos. The Jackson half of the act was Paul Jackson, one-time vocalist with original Def Leppard guitarist Pete Willis' band Roadhouse. Sean's death impacted the band who had to start from scratch in their search for a recording deal.

Sean died on , . A diabetic, Sean had suffered a series of stokes prior to his passing. Lydia Criss and Bill Aucoin were among those who attended his funeral. Delaney passed away in Utah, and is buried in the city of Orem. On the bottom of the tombstone read the names of Gene Paul Ace Peter.

Sean started working on his biography in 1997 and initially titled it "SeanSStory." By 1998 Sean had changed the title to "Sean Delaney, The Fifth KISS." He suggested that he brought in an investigative reporter to conduct comparative interviews with the cast of characters in the early years to validate his stories. By December 2001 Sean had essentially completed work on the book and was in active discussions for publication. By 2002 the title had been changed to "Sean Delaney's Hell Box." What was eventually published posthumously was a sparse 118-page work, which was Sean's work completed by Bryan J. Kinnaird. It was vanity published via Xlibris in 2004.

* http://en.wikipedia.org/wiki/Peter_Criss_%28album%29 - Peter Criss' solo album, for which Sean Delaney was a songwriter