The New Zealand Threat Classification System is used by the Department of Conservation to assess conservation priorities of species in New Zealand.[1]

The list was developed since the IUCN Red List, a similar conservation status system, had some shortcomings for the unique requirements of conservation ranking in New Zealand. 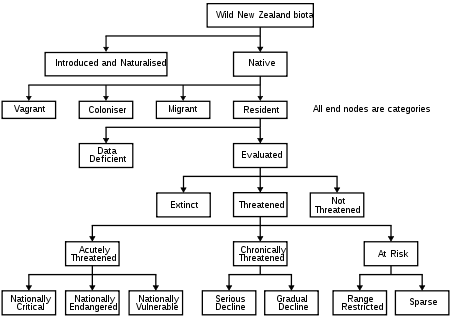 Species that are ranked are assigned categories and

These are any species that are deliberately or accidentally introduced into New Zealand.

Vagrants are taxa that are rare in New Zealand that have made their own way and do not breed successfully.

These taxa have arrived in new Zealand without human help and reproduce successfully.

Migrant species are those that visit New Zealand as part of their life cycle.

This category lists taxa for which insufficient information is available to make as assessment on conservation status.

Taxa for which there is no reasonable doubt that no individuals exist are ranked as extinct. For these lists only species that have become extinct since 1840 are listed.

This category has three major divisions:

This division is further broken down into:

This has two categories:

This has two categories:

If taxa fit into none of the other categories they are listed in the Not Threatened category.

A series of qualifiers are used to give additional information on the threat classification:[1]