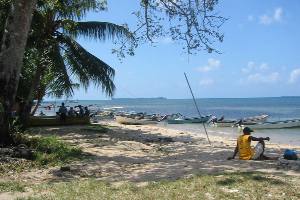 During the Japanese captured Lorengau in April 1942 without struggle and established an administrative base and airstrip. In February 1944 the and n forces launched a six-week campaign to recaptured the facility, which was eventually achieved on May 18, 1944.

The Americans expanded the Japanese base and constructed a huge naval base at nearby Lombrum. An airstrip capable of handling heavy bombers was constructed at Momote and it was here that the invasion to capture the was staged.

After the war the base was scraped and all equipment was bulldozed into pits or the harbour.