Daniel Tammet (born Daniel Paul Corney[1] on 31 January 1979) is a British writer. His bestselling 2006 memoir Born On A Blue Day, about his life with high-functioning autism and savant syndrome, was named a "Best Book for Young Adults" in 2008 by the American Library Association.[2]

Tammet's second book, Embracing the Wide Sky, was named one of France's bestselling books of 2009 by L'Express magazine in its March 2010 edition.[3]

Tammet's books have been published in 20 languages.[4] 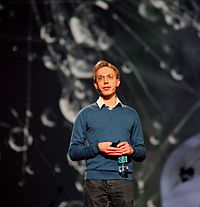 Tammet was born and raised in East London, England, the eldest of nine children. He suffered epileptic seizures as a young child, which he subsequently outgrew following medical treatment. At age twenty-five, he would eventually be diagnosed with Asperger syndrome by Professor Simon Baron-Cohen of the Autism (Spectrum) Research Centre at Cambridge University[5]. Tammet is one of fewer than a hundred "prodigious savants" according to Dr. Darold Treffert, the world's leading researcher in the study of savant syndrome. [6] [7]

Tammet finished school with nine GCSEs (an 'A*' in History, 'A' grades in English, English Literature, French, and German, two 'B' grades in the Sciences, a 'B' in Maths, having obtained an 'A' in his preliminary Maths exam, and a 'C' in Woodwork) [8] and three A-Levels in History, French and German, all at grade 'B'.[9]

Preferring travel to university, Tammet taught English for a year in Lithuania.

He changed his birth name by deed poll because "it didn't fit with the way he saw himself."[9]

In 2002 Tammet launched his website, Optimnem.[11] The site offers language courses (currently French and Spanish) and has been an approved member of the U.K.'s National Grid for Learning since 2006.[8]

Tammet's memory, mathematical and linguistic abilities have been studied by some of the world's leading neuroscientists at California's Center for Brain Studies and the UK's Cambridge Autism Research Centre [12] and have been the subject of several peer-reviewed scientific papers.[13] Professor Allan Snyder at the Australian National University has said of Tammet: "Savants can't usually tell us how they do what they do. It just comes to them. Daniel can describe what he sees in his head. That's why he's exciting. He could be the 'Rosetta Stone'."[9]

Tammet's unusually vivid and complex synesthesia has been widely reported. In his mind, he says, each positive integer up to 10,000 has its own unique shape, colour, texture and feel. He can intuitively "see" results of calculations as synaesthetic landscapes without using conscious mental effort and can "sense" whether a number is prime or composite. He has described his visual image of 289 as particularly ugly, 333 as particularly attractive, and Pi as beautiful. The number 6 apparently has no distinct image yet what he describes as an almost small nothingness, opposite to the number 9 which he calls large and towering.[8][14] Tammet has described 25 as energetic and the "kind of number you would invite to a party".[15] Tammet not only verbally describes these visions, but has also created artwork, including a watercolour painting of Pi.

Tammet holds the European record for reciting Pi from memory to 22,514 digits in five hours and nine minutes on 14 March 2004.[16] Tammet's record currently ranks 6th in the world.[17]

Tammet states in Born On A Blue Day that he speaks ten languages: English, Spanish, French, German, Finnish, Lithuanian, Romanian, Icelandic, Welsh, and Esperanto. He learned conversational Icelandic in one week, a fact he demonstrated with a television interview conducted entirely in the language [8] His instructor described Tammet's feat as "not human" and "genius." Segments of the interview showing Tammet responding to questions in Icelandic were televised on 28 January 2007 edition of the CBS news magazine, 60 Minutes.[14]

His savant abilities were showcased in a documentary film entitled (in the UK) The Boy With The Incredible Brain, first broadcast on the British television station Channel Five on 23 May 2005.[18] The documentary showed him meeting Kim Peek, a world famous savant. Peek was shown hugging Tammet telling him that "Some day you will be as great as I am," to which Tammet replied, "That was a wonderful compliment; what an aspiration to have!".

Born On A Blue Day, Tammet's memoir of a life with Asperger's syndrome, received international media attention and critical praise. Booklist's Ray Olson stated that Tammet's autobiography was "as fascinating as Benjamin Franklin's and John Stuart Mill's" and that Tammet wrote "some of the clearest prose this side of Hemingway". Kirkus stated that the book "transcends the disability memoir genre". Other reviewers praised Tammet for his "elegant," "eloquent," and "engaging" style.

For his U.S. book tour, he appeared on several television and radio talk shows and specials, including 60 Minutes and Late Show with David Letterman.[8]

In February 2007 Born on a Blue Day was serialised as BBC Radio 4's Book of the Week in the United Kingdom.

Tammet's second book Embracing the Wide Sky[13] was published in 2009. Professor Allan Snyder, director of Sydney University's Centre for the Mind, called the work 'an extraordinary and monumental achievement'.[19] Tammet argues that savant abilities should not be seen as "supernatural" or computer-like but as "an outgrowth" of normal brain functioning and "natural, instinctive ways of thinking about numbers and words", which suggests that affected brains might be at least partially retrained and that normal brains might be taught to develop or retain some savant abilities.[19]

In other people blue is connected with sadness for example, but when you think about it sadness is an abstract concept so why is it blue, why not green or yellow? It makes no more logical sense for sadness to be blue than for four to be blue. So there are certain connections, certain concepts in everyone's brain that are connected that way and mine just takes it to a whole other level.

Tammet was among the invited speakers at the TED2011 'Rediscovery of Wonder' conference in Long Beach, California.[20]

Tammet's abilities have been examined in several scientific investigations.

Following his strong performance in the World Memory Championships, Tammet participated in a group study of several superior memorisers later published in the New Year 2003 edition of Nature Neuroscience.[21] The researchers investigated the reasons for the memorisers' superior performance. They reported that the superior memorisers used "strategies for encoding information with the sole purpose of making it more memorable", and concluded that superior memory was not driven by exceptional intellectual ability or differences in brain structure.[22]

In another study, Simon Baron-Cohen and others at the Autism Research Centre at the University of Cambridge tested Tammet's abilities in around 2005.[23] He was found to have synaesthesia according to the "Test of Genuineness-Revised" which tests the subjects' consistency in reporting descriptions of their synaesthesia. He performed well on tests of short term memory (with a digit span of 11.5, where 6.5 is typical). Conversely, test results showed his memory for faces appeared to be impaired, and he scored at the level expected of a 6-8 year old child in this task. The authors speculate that Tammet's savant memory could be a result of synaesthesia combined with Asperger syndrome, while noting that mnemonic strategies (such as the method of loci) could also explain savant memory abilities.

Baron-Cohen, Bor and Billington investigated whether his synaesthesia and Aspergers syndrome explained his savant memory abilities in a further study. The authors state that the memory training used by other experts does not explain his abilities, as he had not had explicit training. They conclude that his exceptional mental abilities may relate to hyperactivity in one brain region (the left prefrontal cortex), which results from his Aspergers syndrome and synaesthesia.[24]

In his book Moonwalking with Einstein, Joshua Foer speculates that study of conventional mnemonic approaches has played a role in Tammet's feats of memory, while accepting that Tammet meets the standard definition of a prodigious savant.[1] In a review of his book for The New York Times, psychologist Alexandra Horowitz described Foer's speculation as among the book's few "missteps" and his decision to devote space to the case of a "renowned savant" such as Tammet "inexplicable," questioning whether it would matter if he had used such strategies or not.[25]

Tammet met his first partner, software engineer Neil Mitchell, in 2000. Tammet lived with him in Kent, where they had a quiet regimented life at home with their cats, preparing meals from their garden.[6][26] Tammet and Mitchell operated the online e-learning company Optimnem, where they created and published language courses.

Tammet now lives with a new partner, Jérôme Tabet, a French photographer whom he met while promoting his autobiography. Although he has said that he did not think he would be here if it were not for the love and support of Mitchell, more recently he noted that he used to live a rigid existence aimed at calming his many anxieties — "I was very happy, but it was a small happiness" — whereas now, as the subtitle of Embracing the Wide Sky: A tour across the horizons of the mind asserts, he believes that we ought to seek to liberate our brains — a belief reflected in his new life:[27]

My life used to be very simple and regimented but since then I have travelled constantly and given lots of lectures and it just changed me... It made me much more open, much more interested in, I guess, the full potential of what my mind could do... Because of that change I grew and in a sense I grew apart from my long-term partner, so we parted amicably in 2007, and a short while later I met my current partner, who is from France so I decided to go and live with him in Avignon.

Mänti is a constructed language that Tammet has created.[28] The word 'Mänti' comes from the Finnish word for 'pine tree' (mänty). Mänti uses vocabulary and grammar from the Finnic languages. Some sample words include: