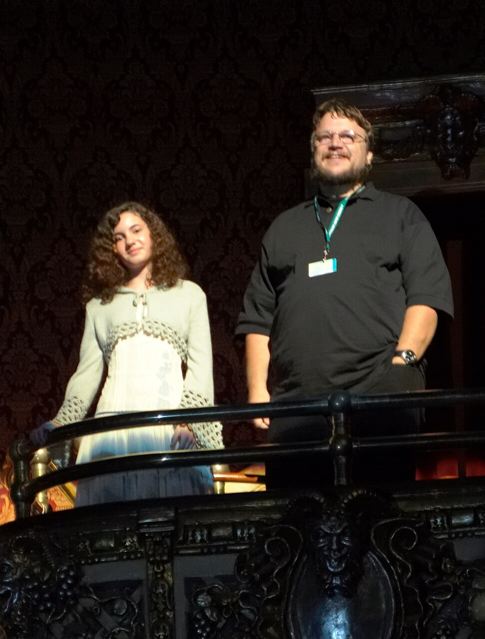 Guillermo del Toro Gómez (born , ) is an -nominated filmmaker. He is one of the film directors known as the "Three Amigos" (Spanish: Cineastas, Trío de Amigos) that include and .

Del Toro was born October 9, 1964. He studied in the Instituto de Ciencias, [http://movies.yahoo.com/movie/contributor/1800026601/bio] , and was raised by his devout grandmother. Del Toro first got involved with filmmaking when he was about eight years old. He executive produced his first short film, Doña Lupe, in 1986 at the age of 21. After that he spent eight years as a special effects make-up designer, and formed his own company, Necropia. He also co-founded the Guadalajara-based Mexican Film Festival. Later on in his directing career, he formed his own production company, the Tequila Gang.

In 1998 his father was kidnapped in Mexico, which prompted del Toro to move abroad to live as an . He currently lives in Westlake Village in Los Angeles, with his wife and his two daughters, Mariana and Marisa.

Guillermo del Toro has directed a wide variety of films, from adaptations ("Hellboy" and "") to historical fantasy and s, two of which are set in in the context of the under the rule of . These two films, "El espinazo del diablo" "(The Devil's Backbone)" and "El laberinto del fauno" ("Pan's Labyrinth"), are among his most critically acclaimed works. They share similar settings, protagonists (young children), and themes (including the relationship between fantasy/horror and the struggle to live under authoritarian or dictatorial rule) with the 1973 Spanish film "", widely considered to be the finest Spanish film of the 1970s [Curran, Daniel, ed. "Foreign Films," film review and analysis of "The Spirit of the Beehive," page 161-2, 1989. Evanston, Illinois: Cinebooks. ISBN 0-933997-22-1.] .

Del Toro, as interviewed on 's Show, lists several fascinations that have become regular features in his films: "I have a sort of a for , , , dark places, and unborn things." Del Toro's work notably frequently includes monsters. In recent interviews, he has stated that he has always been "in love with monsters. My fascination with them is almost anthropological... I study them, I dissect them in many of my movies: I want to know how they work, what the inside of them looks like, [and] what their sociology is." He also mentions as influences , , , , and .

He is close friends with two other prominent and critically praised Mexican filmmakers, and . The three often influence each other's directorial decisions, and have been interviewed together by . Cuarón was one of the producers of "Pan's Labyrinth". All three received Oscar nominations when the 2006 nominations were unveiled in January 2007 - del Toro for his original screenplay for "" (the film itself received 6 nominations, including Best Foreign Language Film), Cuarón for editing and co-writing "" and Iñárritu for producing and directing "Babel". Del Toro turned down The Chronicles of Narnia: The Lion the Witch and the wardrobe to do this film. Del Toro also received a for Best Script for his "Pan's Labyrinth" script.

In addition to having close relationships with other directors, del Toro seems to have a working relationship with actor . Many of his films have included Perlman as the main or secondary actor. This includes Blade II and the Hellboy movies in which he had to petition for seven years to have Perlman as the role of Hellboy due to the fact that the producers originally wanted someone better known." [ [http://www.imdb.com/name/nm0868219/bio Guillermo del Toro - Biography ] ]

After "The Hobbit" and its follow-up, Del Toro is scheduled to direct four films for Universal; ""; ""; a remake of "Slaughterhouse-Five"; and "Drood", an adaptation of a novel due for publication in February 2009. He still has his sights set on filming "" by . "Drood" is expected to be his first project after the two films set in Middle-earth. These projects will fill up his schedule until 2017. [cite news|author=Michael Fleming|title=Guillermo Del Toro booked thru 2017|work=Variety|date=2008-09-03|url=http://www.variety.com/article/VR1117991560.html?categoryid=13&cs=1|accessdate=2008-09-04]

Del Toro said his "Frankenstein" would be a faithful "Miltonian tragedy", citing 's "near perfect" script, which evolved into 's "Frankenstein". [cite news | author = Mike Sampson | title = Guillermo talks! | work = | date = 2007-10-26 | url = http://joblo.com/guillermo-talks | accessdate=2007-10-27] Del Toro said of his vision, "What I’m trying to do is take the myth and do something with it, but combining elements of "Frankenstein" and "" without making it just a classical myth of the monster. The best moments in my mind of "Frankenstein", of the novel, are yet to be filmed [...] The only guy that has ever nailed for me the emptiness, not the tragic, not the Miltonian dimension of the monster, but the emptiness is in the Hammer films, where he really looks like something obscenely alive. has the tragedy element nailed down but there are so many versions, including that great screenplay by Frank Darabont that was ultimately not really filmed." [cite news | author = Chris Hewitt | title = Guillermo Del Toro Talks The Hobbit | work = Empire | date = 2008-02-08 | url = http://www.empireonline.com/interviews/Interview.asp?IID=740&CurrentPage=2 | accessdate=2008-02-08] He has also cited 's illustrations as inspiration, and said the film will not focus on the monster's creation, but be an adventure film featuring the character. [cite news|author=Max Evry|title=Guillermo del Toro on The Hobbit and Frankenstein|work=ComingSoon.net|date=2008-10-05|url=http://www.comingsoon.net/news/hobbitnews.php?id=49378|accessdate=2008-10-05]