The U.S. Government fully supports Mauritania's transition to democracy, and congratulates Mauritania on the successful series of 2006-2007 parliamentary and presidential elections. The U.S. condemned the August 2005 coup and the unconstitutional assumption of power by the Military Council for Justice and Democracy, and called for a return to a constitutional government through free and fair elections as soon as possible. The United States provided election-related assistance for voter education, political party training, and democracy building. The U.S. now aims to work with the Mauritanian Government to expand bilateral cooperation in the areas of food security, health, education, security, strengthening democratic institutions, and counterterrorism.

The 1989 rupture between Mauritania and Senegal (the "1989 Events") that resulted in Mauritania's deportation of tens of thousands of its own citizens to Senegal, negatively affected U.S.-Mauritanian relations. Moreover, Mauritania's perceived support of Iraq prior to and during the 1991 Gulf War further weakened the strained ties.

Relations between the U.S. and Mauritania reached a low in the spring of 1991, as details of the Mauritanian military's role in widespread human rights abuses surfaced. The U.S. responded by formally halting USAID operations and all military assistance to Mauritania. Relations also suffered in the 1990s as a result of repeated reports that slavery continued in some parts of Mauritania despite legal proscriptions. 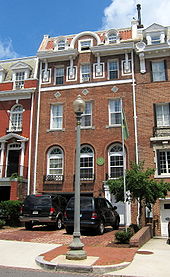 Embassy of Mauritania in Washington, D.C.

By the late 1990s, the Mauritanian Government: adopted policies facilitating the return of those expelled or who fled during the 1989 Events; turned away from Iraq and toward the West; and initiated a poverty reduction strategy while securing debt relief under the Highly Indebted Poor Countries (HIPC) initiative. Improved relations with the United States, including the return of military cooperation and training programs, accompanied these changes.

There is a U.S. Embassy in Nouakchott, Mauritania.