The Korean independence movement grew out of the Japanese colonial rule of the Korean peninsula from 1910 to 1945. After the Japanese surrendered, Korea became independent; that day is now an annual holiday called Gwangbokjeol (literally "Restoration of Light Day") in South Korea, and Chogukhaebangŭi nal (literally "Liberation of Fatherland Day") in North Korea.

In the late 19th century and early 20th century, Korea was occupied and declared a Japanese protectorate in the 1905 Eulsa Treaty, and officially annexed in 1910 through the annexation treaty.

However, Japanese oppressive rule was caused to the many Korean resistance movement that first arose in the nationwide March 1st Movement in 1919. In large part, the movement was stimulated by the statements of US President Woodrow Wilson on the idea of self-determination at the Paris Peace Conference in January 1919, at which he began: "A new era, wakes before our eyes, the old world of force is gone, and the new world of righteousness and truth is here."

Although there were many separate movements against colonial rule, the main ideology or purpose of the movement was to free Korea from the Japanese military and political rule. Koreans were concerned with alien domination and Korea’s state as a colony. They desired to restore Korea's independent political sovereignty after Japan invaded the weakened and unmoderized Korean Empire, which was the result of Japan's political maneuvers to invade Korea by manipulating international community to legitimize a false annexation treaty signed under military coercion. During the independence movement, the rest of the world viewed Korea's resistance movement as a racial anti-imperialist, anti-militarist rebellion, and an anti-Japanese resistance movement.[1] Koreans, however, saw the movement as a step to free Korea from the Japanese military rule.[1]

The South Korean government is criticized for not accepting Korean socialists who fought for the Korean independence.[2]

There was no main strategy or tactic that was prevalent throughout the entire resistance movement, but there were prominent stages where certain tactics or strategies were prominent throughout the movement.[3] From 1905 to 1910, most of the movement’s activities were closed off to the elite class or rare scholar. During this time period, militaristic and violent attempts were taken to resist the Japanese and most of the attempts were not organized, scattered, and leaderless to prevent arrests and surveillance by Japan. From 1910 to 1919, was the time of education during the colonial era. During this time was when many Korean textbooks on grammar and spelling were circulated in schools. It started the trend of Intellectual resistance to the Japanese rule. This educating time period along with Woodrow Wilson’s progressive principles, created an aware, nationalist, and eager student population.[1] After the March 1st movement of 1919, strikes became prominent in the movement. Up to 1945, universities were used as a haven and source of students who further supported the movement. This support system in schools led to the improvement of school facilities in Korea. From 1911 to 1937, Korea was dealing with economic problems along with the rest of the world, which was going through the Great Depression after World War I. There were many labor complaints that contributed to the grievances against Japan’s colonial rule. During this time period, there were 159,061 disputes with workers concerned with wages and 1018 disputes involving 68,686 farmers in a tenant position. In 1926 the disputes started to increase at a fast pace and movements concerning labor emerged more within the Independence Movement.[1]

There were broadly three kinds of national liberation groups: (a) the religious groups which grew out of the Korean Confucianist and Christian communities; (b) the former military and the irregular army groups; and (c) business and intellectual expatriates who formed the theoretical and political framework abroad.

Koreans brought Catholicism to Korea towards the end of the 18th century and faced intense persecution.[4] Methodist and Presbyterian missionaries followed in the 19th century starting off a renaissance with more liberal thoughts on issues of equality and woman's rights, which the strict Confucian tradition would not permit.[5]

The early Korean Christian missionaries both led the Korean independence from 1890 through 1907, and later the creation of a Korean liberation movement from 1907 to 1945.[6] Korean Christians suffered martyrdoms, crucifixions, burnings to death, police interrogations and massacres by the Japanese[citation needed].

Amongst the major religious nationalist groups were: 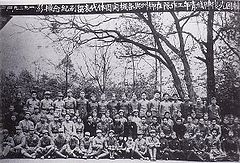 Amongst the major military nationalist groups were:

Expatriate liberation groups were active in Shanghai, Manchuria, parts of Russia, Hawaii, and San Francisco.[citation needed] Groups were even organised in areas without many expatriate Koreans, such as the one established in 1906 in Colorado by Park Hee Byung.[7] The culmination of expatriate success was the Shanghai declaration of independence.

Sun Yat-Sen was an early supporter of Korean struggles against Japanese invaders. By 1925, Korean expatriates began to cultivate two-pronged support in Shanghai: from Chiang Kai-Shek's Kuomintang, and from early communist supporters, who later branched into the Communist Party of China.

Little real support came through, but that which did developed long standing relationships that contributed to the dividing of Korea after 1949, and the polar positions between south and north.

The constant infighting within the Yi family, the nobles, the confiscation of royal assets, the disbanding of the royal army by the Japanese, the execution of seniors within Korea by Japan, and comprehensive assassinations of Korean royalty by Japanese mercenaries, led to great difficulties in royal descendants and their family groups in finding anything but a partial leadership within the liberation movement. A good many of the Righteous army commanders were linked to the family but these generals and their Righteous army groups were largely eliminated by 1918; and cadet members of the families contributed towards establishing both republics post-1945.