Denmark is a close NATO ally, and relations are described as "excellent". Denmark is active in Afghanistan and Kosovo as well as a leader in the Baltic region. The former Danish Prime Minister Anders Fogh Rasmussen reaffirmed that Denmark would remain engaged in Iraq even as its troop levels there decline. Denmark was the only Scandinavian country to approve of the American Invasion of Iraq, and Denmark and the United States consult closely on European political and security matters. Denmark shares U.S. views on the positive ramifications of NATO enlargement. Denmark is an active coalition partner in the War on Terrorism, and Danish troops are supporting American-led stabilization efforts in Afghanistan and Iraq. The United States also engages Denmark in a broad cooperative agenda through the Enhanced Partnership in Northern Europe. The U.S. policy structure to strengthen U.S.-Nordic-Baltic policy and program coordination.[11]

Denmark's active liberal trade policy in the European Union, Organisation for Economic Co-operation and Development, and World Trade Organization largely coincides with U.S. interests. The U.S. is Denmark's largest non-European trade partner with about 5% of Danish merchandise trade. Denmark's role in European environmental and agricultural issues and its strategic location at the entrance to the Baltic Sea have made Copenhagen a center for U.S. agencies and the private sector dealing with the Nordic/Baltic region.[11]

Thule Air Base, the U.S. Air Force base and early warning radar at Thule, Greenland a Danish self-governing territory serve as a vital link in Western defenses. In August 2004, the Danish and Greenland Home Rule governments gave permission for the early warning radar to be updated in connection with a role in the U.S. ballistic missile defense system. At the same time, agreements were signed to enhance economic, technical, and environmental cooperation between the United States and Greenland.[11]

The 1968 Thule Air Base B-52 crash was an accident on 21 January 1968, involving a United States Air Force B-52 bomber. The aircraft was carrying four hydrogen bombs on a Cold War "Chrome Dome" alert mission over Baffin Bay when a cabin fire forced the crew to abandon the aircraft before they could carry out an emergency landing at Thule Air Base. Six crew members ejected safely, but one who did not have an ejection seat was killed while trying to bail out. The bomber crashed onto sea ice in North Star Bay, Greenland, causing the nuclear payload to rupture and disperse, which resulted in widespread radioactive contamination. The United States and Denmark launched an intensive clean-up and recovery operation, but the secondary of one of the nuclear weapons could not be accounted for after the operation completed.[14][15] 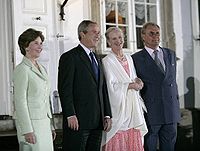 In March 2009, Danish Foreign Minister Lene Espersen met American Foreign Minister Hillary Clinton in the Gaza Donor Conference,[21] and again in a NATO meeting in April 2010, where they met in Estonia.[22]

In March 2009, Crown Prince Frederik and Princess Mary visited the Midwest. They visited The Danish Home in Chicago, and the Danish villages of Elk Horn, Ames, Kimballton and Dana College in Iowa. In Nebraska, the couple visited the Grand View University.[16]

"States like Iowa and Nebraska boast numerous examples of Danish settlements... Both universities have made great strides to become highly recognized institutions of higher learning, as well as strengthening ties between Denmark and the United States," Crown Prince Frederik said.[16]

This article incorporates public domain material from websites or documents of the United States Department of State (Background Notes).