Biblioteca Nacional de Venezuela (BN) (English: National Library of Venezuela), is a central repository of books and newspapers of Venezuela, has the right to receive a copy of every book printed in Venezuela by a Venezuelan publisher. It collects books and magazines published in the country. It was established in Caracas in 1833. It has approximately 7.1 million volumes in its collection.[1] 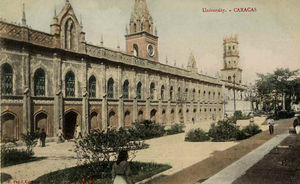 For many years the National Library of Venezuela's headquarters were located between the Central University of Venezuela (now, Palace of the Academies) and the Expositions Palace (now, Headquarters of the Metropolitan Council of Caracas)

The beginning of the idea of a Venezuelan national library dates from independence times and is associated with the name of Juan Germán Roscio, a noteworthy Venezuelan ideologist and patriot who had the initiative to promote the opening of a public library for Caracas. The National Library of Venezuela was officially founded on July 13, 1833 during the government of José Antonio Páez for the purpose of providing the Venezuelans of that time with the opportunity to gain an education. At present, the National Library and Library Services Autonomous Institute keep their doors open to the national community, so they can be informed, educated and take an active part in their educational process.

During the 19th century, a convulsive time in Venezuela, the national library lacked its own premises and operated in an itinerant way. It was only during the second decade of the 20th century when the first steps were taken to arrange for a home of its own, next door to the University of Caracas and the ex-San Francisco Convent. There, in 1911, the National Library was established in what was going to be its headquarters for some decades.

Throughout the 20th century, the National Library was not foreign to the ups and downs of the country's political instability. This resulted in an uneven period of stagnation in spite of the single-handed efforts of each of its directors which took a long time to be overcome. 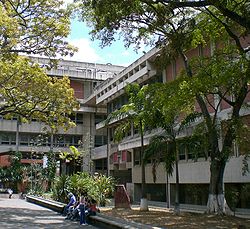 In 1937 Enrique Planchart is designated director of the National Library. During the first two years of his administration, an annex of 5 floors with the capacity to store 175,000 volumes was constructed next to the headquarters of the San Francisco Convent. Planchart started the modernization of the institution, introducing the cataloging system according to the rules of the Library of Congress in Washington D.C.. As a result, it was revealed that the Venezuelan Library had 115,000 volumes in its collection.

By 1952, it had increased its collection to about 200,000 volumes, including pamphlets and newspapers, and had a workforce of 68 employees. The same year Enrique Planchart retired, Lucila Pérez Díaz assumed direction of the library. The Newspapers section was organized in accordance with the rules of the National Library of Spain, and a counselling service was launched to support the users. Also initiated were exhibitions, concerts, recitals, and cultural performances.[2]

During the mid-1970s when, in the light of a favorable political and economic reality, the conditions are given for the reappearance of the early Utopia, with unusual vitality and enthusiasm. The crusade for the collective reinvention of the national library began in 1974 when president Carlos Andrés Pérez appointed a commission integrated by several personalities, among them Pedro Grases, Tomás Sanabria and Virginia Betancourt, the latter then Executive Secretary of the Banco del Libro, The objective of the commission was to propose ideas and opine about where the library should go, its legal context, where its headquarters could be sited and what kind of construction it would require.[3]

In 1975, the Ministry of Public Works accepted the commission's recommendation and proposed the construction of a new building within the context of a more ambitious urban development project, the so-called Foro Libertador (Liberator Forum). In 1976, the architectural project was entrusted to the architectural firm Sanabria Arquitectos, S.A. On July 27, 1977 the National Library and Library Services Autonomous Institute was created.[4] 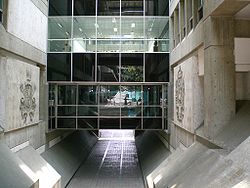 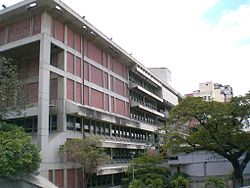 The main Headquarters of the National Library of Venezuela are located in Caracas, were designed by Architect Tomás Sanabria, being started in 1981, and occupied in 1989. This building of 80,000 sq.m. gross. In this building, an assorted range of design determinants, specialized construction techniques, environmental features of a state of the art library construction and sophisticated operating and control system are brought together. It was designed to house up to 5,800,000 volumes and sit up to 1,700 users in 11 reading rooms. Together with the National Pantheon, the National Archives, the Supreme Tribunal of Justice, the San Carlos Barracks, and other government buildings, conforms the Liberator Forum.

They are spaces available in the National Library of Venezuela for the community, equipped with acoustics and technical conditioning which result for the cultural action and diffusion activities. 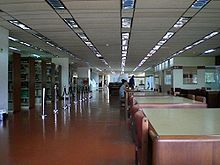 Reading room at the National Library of Venezuela

This service coordinates the technical processes required in order to guarantee the complete operation of the National Library and the Public Libraries National System. It selects, acquires, classifies, catalogues and distributes bibliographical and non-bibliographical materials. It develops and maintains the National Library Automated Information Service (SAIBIN) to which sixteen public and private institutions are connected. 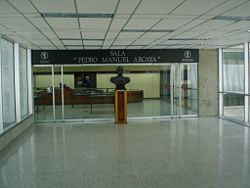 This service is responsible for the preservation and conservation of documents of great value to the national memoir, using alternate supports such as microfilm and facsimiles in order to preserve for the future fragile and unstable materials which require special care to guarantee their permanence through time for future generations. Additionally, it offers advice on conservation matters to public and private institutions in Venezuela, Latin America and the Caribbean.

It is ruled by the law on Legal Deposit and its Regulation, a Juridical Norm of the Venezuelan State. Its mission is to ensure the rescue and preservation of bibliographical, nonbibliographical and audio-visual materials produced or abroad with circulation in Venezuela, for the purpose of preserving the national memoir and guaranteeing free access to information.

The Legal Deposit number is the national number which identifies each work, product or production. The request of same is mandatory for works published or produced in Venezuela on any format or support. Said number must be printed on a visible place on the work published or produced.

It welcomes users and guides them to those collections and services which allow them to obtain the information they need. In this collection the user can find, Dictionaries, encyclopedias, bibliographies, indexes, library directories and catalogues, yearbooks, almanacs, atlas, biographies, chronologies, all organized to facilitate their consultation. 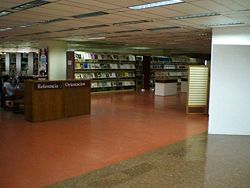 At the Center of Documentation, Information and Library Science (CEDINBI) we find Venezuela's most complete library and information Sciences specialized collection. It eases access to the sources for pre and post-graduate students, professionals and specialists on the matter. The acknowledge of a library and archives organization, conservation, professional training, information services management and Library Architecture is available here.

It offers the user a wide collection of Venezuelan and foreign books and brochures kept by the National Library. Books on multiple topics, of universal interest, as well as special materials on Latin America and the Caribbean, for everyone's consultation.

This service constitutes the way to enrich the collections of the National Library and the Public Libraries National System. 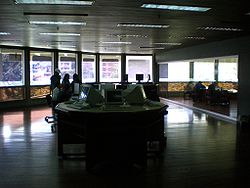 Divulging Publications are educational-formative materials, aimed to guide citizens on priority issues and presented in an easy-comprehension language in order to improve the quality of life of readers in general. They are prepared by a multidisciplinary theam whose members belong to several public and private organizations, under the coordination of the National Library.

It presents users with the largest collection of domestic and foreign newspapers and magazines in Venezuela, from the 19th century through our days. National and International milestones through time are available to those interested.

It provides readers with publications prepared by the National and State Governments, from the 19th century to the present, such as official gazettes, presidential messages and speeches, census, yearbooks, reports and accounts, among others. Additionally, foreign government's official publications can also be consulted, especially from Latin America and the Caribbean. 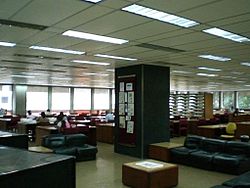 This service is a unique heritage of the national and universal culture, its collection is based on Venezuelan and foreign works from the 15th through the 17th centuries. It also includes works and collections on subsequent centuries from prominent Venezuelan and foreign people, such as Francisco de Miranda, José María Vargas, Arístides Rojas, Pedro Manuel Arcaya (With more than 170,000 volumes), Alexander Humboldt, Pablo Neruda, the Tratatus domini of Nicolai de Ubaldis, an Italian 1471 manuscript, considered as an Inquisitors' Manual, the Calendario manual y guía universal de forasteros en Venezuela, first book printed in Venezuela in 1810 attributed to Andrés Bello, the natural studies collection of Mayeul Grisol, the original rough draft of Memorias de Mamá Blanca of Teresa de la Parra, a collection of autographed works of different authors, among other things.

It embraces four centuries of testimonies of the Venezuelan and Latin American written memoirs, constituted by original sketches from authors which reflect the diversity of human taught. It is a collection integrated by unique pieces from every day notes, inventories which portray our past realities, the historical and cultural processes of various periods. It is composed of a patrimony exceeding the half a million original typewritten and holograph manuscripts and over 500,000 duplicated in microforms and paper. 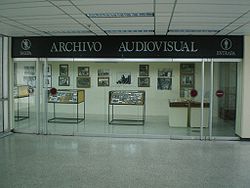 It is the depositary center for Venezuela's documental and audio-visual patrimony, composed by the following collections: 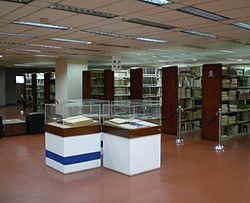 Public libraries are information centers which timely make available to their users all kinds of knowlodge and information. They are a permanent source of support to integra education and to the achievement of more and better knowledge by the various sectors of the population in order to promote social equity, free access to information and, at the same time, to promote the quality of life of all citizens. They assist communities spreading information for the purpose of forming critical, selective and creative readers, simultaneously developing their motivations for reading and their skills to obtain gratifying experiences from such a fact. Public libraries constitute the privileged space for the formation of an autonomous and independent reader, since it is in public libraries where they can actually have the option of building a relationship with reading, books and materials which cover and satisfy their users various needs. Furthermore, they work as centers for meeting, participating and carrying out different events. In Venezuela, the Public Libraries National System is integrated by 685 library services distributed over the whole national territory. The Metropolitan Network of Public Libraries embraces the Great Caracas Area and has 41 library services.[6] At the Tulio Febres Cordero Reading Room in Mérida, it is possible to consult Venezuelan newspapers from the early days of the 19th century which spread the renewing ideas that set off Emancipation from Spain.[7]