Though it would be decades before George Washington’s namesake university would be established by an Act of Congress, the George Washington University Law School—founded in 1825, closed in 1826 due to financial difficulty, and then reorganized in 1865—was the first law school in the District of Columbia.

In 1865, the president of Columbian College (now The George Washington University) facilitated the purchase of a building owned by Trinity Church for the purpose of holding law classes. In 1867, the school graduated its first class, who represented twenty two of the then thirty seven states. The Master of Laws degree program was adopted by the school in 1877. In 1900, the school was one of the founding members of the Association of American Law Schools.

In 2010 the median GPA for incoming GW Law students was 3.79, and the median LSAT score was 167.[3] The law school received approximately 9,700 applications for fall 2009 admissions, making it one of the most competitive law schools in the country.[4]

Students enrolled in the J.D. program come from 42 states, the District of Columbia, the Marshall Islands, the Virgin Islands, and nine other countries.[5] The Law School also enrolls highly-qualified students from approximately 45 countries each year in its Master of Laws and Doctor of Juridical Science degree programs.[6]

The school is accredited by the American Bar Association and is a charter member of the Association of American Law Schools. GW Law has one of the largest curricula of any law school in the nation with more than 250 elective courses covering every aspect of legal study.[citation needed]

The school currently has about 2,000 degree candidates: 1,400 full-time JD students, 300 part-time students, and 300 post-J.D. candidates from the United States and approximately 55 other countries.

The following advanced degrees are offered:

GW Law is currently ranked 20th in the 2012 Law School Rankings of U.S. News & World Report.[7] US News ranked GW Law 3rd in intellectual property law, and 5th in international law in its 2012 rankings. The law school's Government Procurement Law program is widely considered to be the preeminent program of its kind, and GW Law's part-time J.D. program is ranked 3rd best in the country.[8]

According to Brian Leiter's recent law school rankings (an alternative to the U.S. News survey), GW ranks 12th in the nation for Supreme Court Clerkship Placement (2000–2008), 19th for student numerical quality, and 18th for law faculties with the most “scholarly impact” as measured by citations during roughly the past five years.[9][10][11]

In 2007, the National Law Journal ranked GW Law among the top 20 law schools that place the highest percentage of graduates in top American law firms.[12]

Additionally, Vault ranked GW Law No. 20 in its 2008 Top 25 Law Schools Survey, which emphasized the employability and preparedness of graduates of U.S. law schools based on a survey of lawyers and legal recruiters from the nation's largest firms.[13] 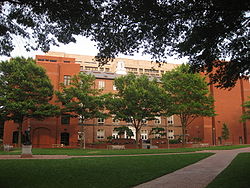 Lerner Hall, Stockton Hall, and the Burns Law Library, with the IMF seen in the background.

GW Law is located in the heart of Washington's Foggy Bottom neighborhood, across the street from the World Bank and International Monetary Fund headquarters, and a few blocks away from the State Department and the White House.

The Jacob Burns Law Library holds a research collection of more than 500,000 volumes.

In 2000, the law school began a major building and renovation scheme to create an integrated, modern learning facility. The school has expanded into buildings on the east side of the University Yard.

The Law School currently occupies nine buildings on the main campus of The George Washington University. The Law School's main complex comprises five buildings anchored by Stockton Hall (1924) located on the University Yard, the central open space of GW's urban campus. Renovated extensively between 2001 and 2003, these buildings adjoin one another, have internal passageways, and function as one consolidated complex. Three townhouses directly across from the main complex house the Community Legal Clinics, Student Bar Association, and student journal offices. 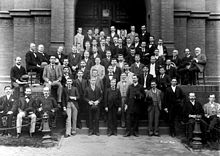 Notable alumni of The George Washington University Law School include: