The Ontario Lottery and Gaming Corporation (French: Société des loteries et des jeux de l'Ontario), known for corporate branding purposes simply as OLG since 2006, is a Crown Corporation of the Government of Ontario, Canada. It is responsible for the province's lotteries, charity and Aboriginal casinos, commercial casinos, and slot machines at horse-racing tracks. It was created in April 2000 when the Ontario Lottery Corporation (OLC) was merged with the Ontario Casino Corporation (OCC), established in 1994; prior to 2006, the combined entity was known in short form as the OLGC (or SLJO in French). OLG employs over 8000 individuals throughout Ontario.

Whereas OLG is responsible for, and operates a variety of gaming services, the Alcohol and Gaming Commission of Ontario (AGCO) regulates casino gaming. OLG reports through its Board of Directors to the Minister of Finance. From 2003 to 2007 it was under the Ministry of Public Infrastructure Renewal (Ontario). 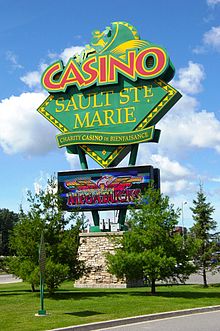 OLG owns and manages ten casinos, some of which have private operators:

(* Operated directly by OLG. All others are handled by private operators)

OLG operates slot machine facilities at 17 racetracks across Ontario. They are located at:

OLG operates e-bingo centres in Barrie, Peterborough, Kingston and Sudbury. Some games are linked to be played at all four simultaneously.

The minimum age to purchase OLG lottery tickets is 18; however, for patronizing casinos and/or parimutuel facilities in the province, it is 19. (the same for Ontario's drinking age).

On October 25, 2006, the CBC program the fifth estate aired an investigative report on lottery retailers winning major prizes, focusing on the ordeal of 82-year-old Bob Edmonds. His $250,000 winning Encore ticket was stolen by a conveinience store clerk when he went to have his ticket checked in 2001. For the next four years, OLG ignored Edmonds' inquiries after the clerk and her husband were falsely named the rightful winners. Later, when the couple were arrested for fraud, OLG refused to return his winnings. OLG maintained that it wasn't their responsibility that they had been tricked into naming the wrong winner; in 2004, a judge disagreed, and forced OLG to give Edmonds his money. They did so, on the condition that Edmonds sign a confidentiality agreement, so that he would never tell the press about certain details of the ordeal. Also, the fifth estate uncovered internal OLG memos where several employees admitted they believed Edmonds' story, even when OLG was refusing to give him back the money. Immediately following the broadcast, Edmonds received a call from OLG's president, Duncan Brown, who apologized and said he was ashamed about how his staff treated Edmonds. OLG later released Edmonds from the confidentiality agreement. He died on April 2, 2007.

In another case, Toronto variety store owner Hafiz Malik had defrauded four school board employees out of their $5.7 million prize. He was arrested after the original ticket owners filed a complaint with police. The OPP seized or froze over $5-million of Malik's assets, including bank accounts, three cars, and a home in Mississauga. OLG has since awarded the rightful winners the prize plus interest.[4]

The report by the fifth estate added that over 200 lottery retailers in Ontario have won major prizes from 1999 to 2006. A statistician featured in the report, Jeffrey S. Rosenthal, calculated that the chance that this would occur purely out of luck is one in a "trillion trillion trillion trillion" (or quindecillion).[5] OLG did have a policy on insider wins, but it was rarely enforced during that period. Provincial ombudsman André Marin released a report stating that Ontario store owners and their families claimed about $100 million in lottery wins between 1999 and 2006, with tens of millions of fraudulent claims being ignored by the OLGC.[6]

OLG has since mandated new security measures to protect lottery customers, notably with customer-facing displays when tickets are checked, as well as special music played with a winning ticket. As of January 28, 2008, lottery retailers are required to ensure that tickets are signed. There is a signature box shown on the front of all on-line lottery tickets.

In March 2007, OLG announced that it had recalled over 1,000,000 scratch and win tickets. The "Super Bingo" series of tickets were removed from retail stores after it was announced that a customer made the claim that he could visually tell which tickets were winners. It was the largest recall ever of a lottery ticket in Canada, and were prompted in part from greater media scrutiny regarding ongoing fraud investigations.

In February 2007, it was discovered that 87 slot machines at Provincially run casinos were displaying subliminal messages on slot machine screens to players. An image of a winning symbol combination was shown quickly before or during the simulated spinning of the slot machine reels. The manufacturer, Konami, provided a software update for the machines.

In the wake of these controversies, the provincial government ordered Duncan Brown to be relieved of his position as OLG chief on 21 March 2007. This was not public knowledge until two days later, when Brown's dismissal took effect. David Caplan, Ontario's minister responsible for OLG, intended to announce this firing on 26 March following the release of a report on OLG's situation by provincial ombudsman André Marin. Marin criticized the OLG for being more fixated on profits than the integrity of games after a disproportionate number of lottery retailers or their families claimed winning tickets.[7][8]

Chair of the Board of Directors