Indian removal
The term Indian in this article refers to Native Americans; not to be confused with South Asians from the Indian subcontinent 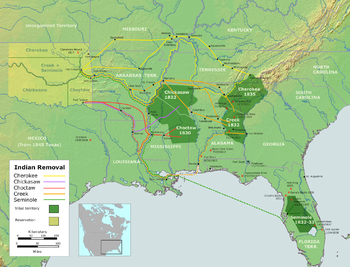 Indian removal was a nineteenth century policy of the government of the United States to relocate Native American tribes living east of the Mississippi River to lands west of the river. The Indian Removal Act was signed into law by President Andrew Jackson on May 26, 1830.

Since the presidency of Thomas Jefferson, America's policy had been to allow Native Americans to remain east of the Mississippi as long as they became assimilated or "civilized". His original plan was to guide the Natives towards adopting a sedentary agricultural lifestyle, in large part due to "the decrease of game rendering their subsistence by hunting insufficient".[1] Jefferson's expectation was that by assimilating them into an agricultural lifestyle, they would become economically dependent on trade with white Americans, and would thereby be willing to give up land that they would otherwise not part with, in exchange for trade goods.[2] In an 1803 letter to William Henry Harrison, Jefferson wrote:

When they withdraw themselves to the culture of a small piece of land, they will perceive how useless to them are their extensive forests, and will be willing to pare them off from time to time in exchange for necessaries for their farms and families. To promote this disposition to exchange lands, which they have to spare and we want, for necessaries, which we have to spare and they want, we shall push our trading uses, and be glad to see the good and influential individuals among them run in debt, because we observe that when these debts get beyond what the individuals can pay, they become willing to lop them off by a cession of lands. At our trading houses, too, we mean to sell so low as merely to repay us cost and charges, so as neither to lessen or enlarge our capital. This is what private traders cannot do, for they must gain; they will consequently retire from the competition, and we shall thus get clear of this pest without giving offence or umbrage to the Indians. In this way our settlements will gradually circumscribe and approach the Indians, and they will in time either incorporate with us as citizens of the United States, or remove beyond the Mississippi. The former is certainly the termination of their history most happy for themselves; but, in the whole course of this, it is essential to cultivate their love. As to their fear, we presume that our strength and their weakness is now so visible that they must see we have only to shut our hand to crush them, and that all our liberalities to them proceed from motives of pure humanity only. Should any tribe be foolhardy enough to take up the hatchet at any time, the seizing the whole country of that tribe, and driving them across the Mississippi, as the only condition of peace, would be an example to others, and a furtherance of our final consolidation.[1]

There was a long history of Native American land being purchased, usually by treaty and sometimes under coercion. In the early 19th century the notion of "land exchange" developed and began to be incorporated into land cession treaties. Native Americans would relinquish land in the east in exchange for equal or comparable land west of the Mississippi River. This idea was proposed as early as 1803, by Jefferson, but was not used in actual treaties until 1817, when the Cherokee agreed to cede two large tracts of land in the east for one of equal size in present-day Arkansas. Many other treaties of this nature quickly followed. The process was used in President Andrew Jackson's policy of forced migration in the Indian Removal Act of 1830.[3] 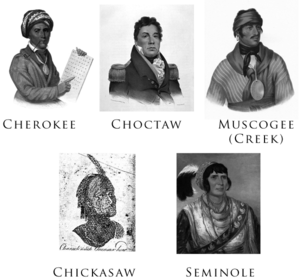 Gallery of the Five Civilized Tribes. The portraits were drawn/painted between 1775 and 1850.

Andrew Jackson was elected president of the United States in 1829, and with his inauguration the government stance toward Indians turned harsher.[4] Jackson abandoned the policy of his predecessors of treating different Indian groups as separate nations.[4] Instead, he aggressively pursued plans to move all Indian tribes living east of the Mississippi River to west of the Mississippi.[4] At Jackson's request, the United States Congress opened a fierce debate on an Indian Removal Bill.[4] In the end, the bill passed, but the vote was close. The Senate passed the measure 28–19, the House 102–97. Jackson signed the legislation into law June 30, 1830.[4]

In 1830, the majority of the "Five Civilized Tribes"—the Chickasaw, Choctaw, Creek, Seminole, and Cherokee—were living east of the Mississippi as they had for thousands of years. The Indian Removal Act of 1830 implemented the U.S. government policy towards the Indian populations, which called for relocation of Native American tribes living east of the Mississippi River to lands west of the river. While it did not authorize the forced removal of the indigenous tribes, it authorized the President to negotiate land exchange treaties with tribes located in lands of the United States.

On September 27, 1830, the Choctaw signed the Treaty of Dancing Rabbit Creek and became the first Native American tribe to be voluntarily removed. The agreement represented one of the largest transfers of land that was signed between the U.S. Government and Native Americans without being instigated by warfare. By the treaty, the Choctaw signed away their remaining traditional homelands, opening them up for European-American settlement in Mississippi Territory. When the Choctaw reached Little Rock, a Choctaw chief (thought to be Thomas Harkins or Nitikechi) stated to the Arkansas Gazette that the removal was a "trail of tears and death".[5]

Alexis de Tocqueville, the French philosopher, witnessed the Choctaw removals while in Memphis, Tennessee, in 1831,

In the whole scene there was an air of ruin and destruction, something which betrayed a final and irrevocable adieu; one couldn't watch without feeling one's heart wrung. The Indians were tranquil, but sombre and taciturn. There was one who could speak English and of whom I asked why the Chactas were leaving their country. "To be free," he answered, could never get any other reason out of him. We ... watch the expulsion ... of one of the most celebrated and ancient American peoples.
—Alexis de Tocqueville, Democracy in America[6]

While the Indian Removal Act made the relocation of the tribes voluntary, it was often abused by government officials. The best-known example is the Treaty of New Echota. It was negotiated and signed by a small faction of Cherokee tribal members, not the tribal leadership, on December 29, 1835. It resulted in the forced relocation of the tribe in 1838.[7] An estimated 4,000 Cherokee died in the march, now known as the Trail of Tears. Missionary organizer Jeremiah Evarts urged the Cherokee Nation to take their case to the U.S. Supreme Court. The Marshall court ruled that while Native American tribes were sovereign nations (Cherokee Nation v. Georgia, 1831), state laws had no force on tribal lands (Worcester v. Georgia, 1832).[8]

In spite of this acculturation, many white settlers and land speculators simply desired the land. Some claimed their presence was a threat to peace and security. Some U.S. states, like Georgia in 1830, passed a law which prohibited whites from living on Native American territory after March 31, 1831, without a license from the state. This law was written to justify removing white missionaries who were helping the Native Americans resist removal.

In 1835, the Seminole refused to leave their lands in Florida, leading to the Second Seminole War. Osceola led the Seminole in their fight against removal. Based in the Everglades of Florida, Osceola and his band used surprise attacks to defeat the U.S. Army in many battles. In 1837, Osceola was seized by deceit upon the orders of U.S. General T.S. Jesup when Osceola came under a flag of truce to negotiate peace.[9] He died in prison. Some Seminole traveled deeper into the Everglades, while others moved west. Removal continued out west and numerous wars ensued over land.

In the aftermath of the Treaty of Fort Jackson and the Treaty of Washington, the Muscogee were confined to a small strip of land in present-day east central Alabama. Following the Indian Removal Act, in 1832 the Creek National Council signed the Treaty of Cusseta, ceding their remaining lands east of the Mississippi to the U.S., and accepting relocation to the Indian Territory. Most Muscogee were removed to Indian Territory during the Trail of Tears in 1834, although some remained behind.

Friends and Brothers – By permission of the Great Spirit above, and the voice of the people, I have been made President of the United States, and now speak to you as your Father and friend, and request you to listen. Your warriors have known me long You know I love my white and red children, and always speak with a straight, and not with a forked tongue; that I have always told you the truth ... Where you now are, you and my white children are too near to each other to live in harmony and peace. Your game is destroyed, and many of your people will not work and till the earth. Beyond the great River Mississippi, where apart of your nation has gone, your Father has provided a country large enough for all of you, and he advises you to remove to it. There your white brothers will not trouble you; they will have no claim to the land, and you can live upon it you and all your children, as long as the grass grows or the water runs, in peace and plenty. It will be yours forever. For the improvements in the country where you now live, and for all the stock which you cannot take with you, your Father will pay you a fair price ...
—President Andrew Jackson addressing the Creek, 1829[4]

Unlike other tribes who exchanged land grants, the Chickasaw were to receive mostly financial compensation of $3 million from the United States for their lands east of the Mississippi River.[10] In 1836, the Chickasaw had reached an agreement that purchased land from the previously removed Choctaw after a bitter five-year debate. They paid the Choctaw $530,000 for the westernmost part of Choctaw land. The first group of Chickasaw moved in 1837. The $3 million that the U.S. owed the Chickasaw went unpaid for nearly 30 years.

As a result, the five tribes were resettled in the new Indian Territory in modern-day Oklahoma and parts of Kansas. Some indigenous nations resisted forced migration more forcefully. Those few who stayed behind eventually formed tribal groups including the Eastern Band Cherokee, based in North Carolina, the Mississippi Band of Choctaw Indians, the Seminole Tribe of Florida, and the Creeks in Atmore, Alabama.

Many figures have been rounded.

Tribes in the Old Northwest were far smaller and more fragmented than the Five Civilized Tribes, so the treaty and emigration process was more piecemeal. Bands of Shawnee, Ottawa, Potawatomi, Sauk, and Meskwaki (Fox) signed treaties and relocated to the Indian Territory. In 1832, a Sauk chief named Black Hawk led a band of Sauk and Fox back to their lands in Illinois. In the Black Hawk War, the U.S. Army and Illinois militia defeated Black Hawk and his army.[18]

The Iroquois were also supposed to be part of the Indian removal, and the Treaty of Buffalo Creek arranged for them to be removed to land in Wisconsin and Kansas. However, the land company that was to purchase the land for the territories reneged on their deal, and subsequent treaties in 1842 and 1857 gave back most of the Iroquois' reservations untouched. Only the Buffalo Creek Reservation was ever dissolved as part of the removal program; a small portion was purchased back over a century later to build a casino.