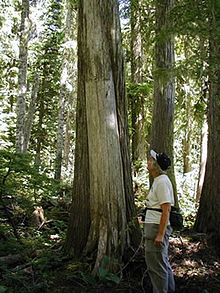 Culturally modified trees (aka CMTs) is a term which describes the modification of trees by indigenous people as part of their tradition. Their meaning for the indigenous cultures is relatively well known, but only from the beginning of the 1980s scientists have recognized that they are also important sources for the history of certain regions. Meanwhile they are even called CMT archives. Although a wide range of results has been produced, and progress has been made as far as methodology is concerned, the CMTs are still rather unknown to the public. Many old trees wearing blue belts with the words "culturally modified tree" in Stanley Park/Vancouver attracted considerable interest - and questions.[1]

Although limiting CMTs to indigenous people, in most cases to Indians, is not coercive, the term is used this way in western Canada and the USA. In northern Scandinavia and Southeast Australia it is used for the same phenomenon in view of the Sami people and Indigenous Australians respectively. Nevertheless there are research projects occupied with basque herders who left thousands of trays in western USA between 1860 and 1930.

The modifications can be arboglyphs or arbographs, that is carvings or paintings, but these are relatively rare. Much more often are trays of usage left by canoe makers, or when people were in need of fibres for making clothes, hats or blankets.

Protection, registration and analysis of CMT-Archives

In the most western Canadian province British Columbia these trees are protected by complex laws. Trees older than 1846 and registered as CMTs are not allowed to be logged. The first lawsuit was against a Canadian who had logged trees of this kind older than 300 years.[2] No license was given between 1996 and 2006, but in that year it was allowed once again - against the resistance of the Haida on Queen Charlotte Islands. Even if the loggers accept the restrictions and spare a CMT, these trees are endangered because they lose their "neighbours" and with them the protection against heavy storms. That is why the members of the Hupacasath First Nation on the western shore of Vancouver Island claim a protective zone around the trees of at least 20 to 30 metres.[3]

The trees are registered, classified and, if possible, dated; the trays are identified and correlated with certain activities or rituals of the First Nations. There are numerous prescriptions for how to register and accumulate the findings. Sophisticated forms were developed to facilitate both the process and the analysis.

The reasons for this elaborate process are on the one hand the meaning for rituals and cultures of the First Nations living in Temperate rain forests. These peoples are very interested in the protection of their archives that consist of old and sometimes extremely high trees that reach nearly 100 m.

On the other hand, the trees are a source of utmost importance for the history of the First Nations (and not only for them), a history that is heavily dependent on oral traditions and archeological findings for the pre-contact phase.

This causes many problems for historians, ethnohistorians, anthropologists. The logging industry, first of all, needs clarity which trees they may log, which ones not. Clearcuts have reduced the old forests to a minimum in most regions and thus destroyed the archives. Many people do not recognize the significance of CMTs and often do not even see the trays. Finding these artefacts is also a problem in areas far away from any infrastructure, so scientists rely on hints given by the local people.

Another problem is that knowledge of these places is not for public but is owned by certain indigenous families. That is the case with many Nuu-chah-nulth on Vancouver Island. Only those people know the corresponding rituals, their devices, stories and dances. So their consent is needed.

The tiny Island of Flores is home of 71 registered culturally modified trees which are protected like archives, libraries, historic sites or memorials.

It was not before the 1980s that scientists recognized the potential of the CMT archives. Hebda and Mathewes pointed out that they could deliver traces up to 5000 years old. After historians and the courts had recognized that the trees of Meares Island are crucial for culture and history of the Indian Nation living there, other indigenous groups started to register CMTs in their own reserves and in their traditional territories to get the same protection for them. Historians and Indians worked closely together.

Frequent species and their ways of usage

Gottesfeld could detect 21 species, which played a certain role as CMTs. Of utmost importance is the Western Red Cedar (Thuja plicata), but the yellow cedar (Chamaecyparis nootkatensis), spruces (Picea glauca u.a.), hemlock (Tsuga heterophylla), pines (Pinus contorta, Pinus ponderosa), in addition Populus tremuloides, Populus trichocarpa and Alnus rubra are also quite frequent. The bark of hemlock and certain spruces was important for nourishment and medicine. The resin of spruces was used as a kind of glue.

But the most often traces are peeled trees - besides traces of planks, canoes, totem poles and house posts. In addition you often find test holes, because, before starting their work, the people wanted to know if the bark or the wood were alright. Sometimes they only needed dry bark or tinder to make fire.

Development and results of some research projects

In 2001 Prince examined British Columbian lodgepole pines (Pinus contorta). Their bark is quite nutritious, if adequately prepared. Prince found two areas, in which the main nutrient was salmon, but in one area it was abundant all year through, in the other there occurred heavy lacks of salmon irregularly (White Eye Lake). He found out that in the less reliable area there were years of heavy concentration of peelings, especially in the years 1810, 1880, 1910, and 1925. None of these areas was "harvested" twice. The bark was obviously a kind of emergency reserve, as a surrogate for the salmon. In the more reliable area he could not find any concentration of this kind. In addition, this tribe needed a much smaller territory than the one with the "times of hunger".

CMTs have become important for the history of Scandinavia, too. The Sami people, who also ate certain kinds of bark, were displaced northwards in the 19th century by the Swedish population, who did not eat bark. Consequently the traces of bark peelers are interrupted from one year to the next, so that historians can exactly tell, when the last Sami left the region under examination. The oldest finding ever registered is 2800 years old. Meanwhile the methods are so much refined that even fossile trees have become an important source for human history. The oldest living CMT was found in British Columbia. It dates back to the 12th century.[4] 2000).

The role of cedars, spruces etc. are taken over by much different species in Australia. Here the red (river) gum (Eucalyptus camaldulensis) and the grey box (Eucalyptus moluccana) are of most importance. There are certain similarities as far as the usage is concerned. Rhoads published in 1992 that within the territory of Southwest Victoria (about 10,000 km²) 228 CMTs were found. In most cases they were found in the vicinity of ancient camps. The other way round: Search is much more promising around these trees, if you are looking for ancient camps.

The most surprising fact was a consequence of research within the Bob Marshall Wilderness in north western -Montana. This is a wilderness of about 3,000 km² (in addition another 3000 of neighbouring wildernesses) that was never ever used by non-aboriginal people. There are no houses, no streets, no fields or pastures. Nevertheless the CMTs showed that between at least 1665 and 1938 indigenous people peeled the bark and conducted other usages.

No historical source - leave alone the cultural meaning - is so heavily endangered, and on the other hand as precise, as the CMT archives. They open new research fields, but do need very exact methodology. A crucial precondition for research is the preservation of old growth forests. So, in addition to ecological, cultural and other scientific reasons to keep them alive, they are historic sites of highest rank.

Countries, whose forests are at least partially untouched, have in most cases not yet realized what they have in front of their doors. E.g. for the history of northern Asia, they can frequently be even the only witnesses of the past. Once destroyed, the history is forgotten forever.

In Canada, where research was for obvious reasons concentrated in the western provinces with its old forests, Ontario has documented CMTs in 2001. In the Nagagamisis Provincial Park most trees found were between 80 and 110 years old, some probably more than 400.

On Hanson Island alone, David Garrick documented 1.800 CMTs. The Kwakwaka'wakw of the region could stop the destruction of their archive. Garrick also found trees in the Great Bear Rainforest on the territory of the Gitga'at First Nation. They are supposed to be logged for a street in the area of Langford. In February 2008 the Times Colonist reported of protesters being removed.[5]

In 1985 already a protection program was started in Washington's Gifford Pinchot National Forest. At 338 spots more than 6.000 CMTs were identified, of which 3.000 are protected now.

17 CMTs were found in the Blue Mountain area within Pike National Forest, at least 26 in Florissant Fossil Beds National Monument. Even trees more than 200 years old were registered in Manitou Experimental Forest north of Woodland Park. Most of these trees within the territory of the Ute are ponderosa pines. Researchers know that they haven't got that much time. The trees have a life-expectancy of 300 to 600 years. Many could be dated, being peeled between 1816 and 1848. In February 2008 the Colorado Historical Society has decided to invest a part of its 7 million dollar budget into a CMT project in Mesa Verde National Park.[6]