A dashpot is a mechanical device, a damper which resists motion via viscous friction. The resulting force is proportional to the velocity, but acts in the opposite direction, slowing the motion and absorbing energy. It is commonly used in conjunction with a spring (which acts to resist displacement). The process and instrumentation diagram (P&ID) symbol for a dashpot is

A less common type of dashpot is an eddy current damper, which uses a large magnet inside a tube constructed of a non-magnetic but conducting material (such as aluminium or copper). Like a common viscous damper, the eddy current damper produces a resistive force proportional to velocity.[1][2][3][4]

Dashpots frequently use a one-way mechanical bypass to permit fast unrestricted motion in one direction and slow motion using the dashpot in the opposite direction. This permits, for example, a door to be opened quickly without added resistance, but then to close slowly using the dashpot. For hydraulic dashpots this unrestricted motion is accomplished using a one-way check-valve that allows fluid to bypass the dashpot fluid constriction. Non-hydraulic dashpots may use a ratcheting gear to permit free motion in one direction. 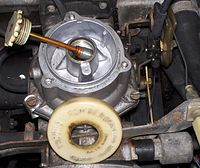 Dashpot in a Zenith-Stromberg carburetor

A dashpot is a common component in a door closer to prevent it from slamming shut. A spring applies force to close the door and the dashpot, implemented by requiring fluid to flow through a narrow channel between reservoirs (often with a size adjustable by a screw), slows down the motion of the door.

Consumer electronics often use dashpots where it is undesirable for a media access door or control panel to suddenly pop open when the door latch is released. The dashpot slows the sudden movement down into a steady and gentle movement until the access door has opened all the way under spring tension.

Dashpots are commonly used in dampers and shock absorbers. The hydraulic cylinder in an automobile shock absorber is a dashpot. They are also used on carburettors, where the return of the throttle lever is cushioned right before the throttle fully closes and then is allowed to fully close slowly to reduce emissions of sudden deceleration (compared to deceleration without a dashpot)

Large forces and high speeds can be controlled by dashpots. For example, they are used to arrest the steam catapults on aircraft carrier decks.

Relays can be made to have a long delay by utilizing a piston filled with fluid that is allowed to escape slowly.

Dashpots are used to form models of materials that exhibit viscoelastic behavior, such as muscle tissue. Maxwell and Kelvin-Voigt models of viscoelasticity use springs and dashpots in series and parallel circuits respectively. Models containing dashpots add a viscous, time dependent, element to the behavior of solids allowing complex behaviors like creep and stress relaxation to be modeled.