The Dean E. Smith Student Activities Center, usually called simply the Smith Center and popularly referred to as the Dean Dome is a multi-purpose arena in Chapel Hill, North Carolina. The arena is home to the University of North Carolina at Chapel Hill Tar Heels men's basketball team, and temporary home to the women's team during renovations to Carmichael Auditorium. The arena opened in 1986.

The arena is named after former North Carolina coach Dean Smith, who coached the team from 1961 to 1997. According to David Halberstam's biography of Michael Jordan, Smith did not want the arena named after him, but was persuaded by the UNC administration and the arena's backers that fundraising efforts for the facility could fail if they did not use his name.[1] Smith coached the last 11 years of his career in the arena, making him one of the few college coaches in any sport to coach in an arena or stadium that is named for him.

The arena is somewhat spread out, making the seats seem far from the floor; however, the sight lines throughout most of the arena are very good, as they are almost the same as those of Carmichael Auditorium, UNC's previous basketball arena. The only obstructed seats are in the upper rows of the lower level, where the view is partially cut-off by the upper level's overhang. 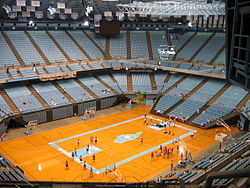 The arena's seating arrangement has been somewhat controversial. Most of the lower-level seats were allocated to members of UNC's athletic booster foundation, the Educational Foundation (better known as the Rams Club). Furthermore, most of those seats are season tickets. While tickets are usually available for most non-conference games, Atlantic Coast Conference games are almost always sold out. For many years, scalping was virtually the only way to get in for ACC games. Recently, UNC has begun putting any tickets returned by the visiting team on sale at 5 pm Eastern Time on the day before the game. This is usually the only way to get a seat for anywhere near face value.

In its early years, the arena was known as among the quieter ones in the country because many seats that would have been occupied by students at other schools were occupied by considerably older alumni who were not so inclined to cheer anywhere near as loudly. This led Florida State player Sam Cassell to say that the Dean Dome “is not a Duke kind of crowd. It’s more like a cheese-and-wine crowd, kind of laid back."[4] In contrast, Carmichael Auditorium, the team's previous arena, was known for its noise level; before one game, the University of Virginia Cavaliers couldn't hear their names announced during player introductions because of the din.[5]

Since 1992, however, expanded student seating and a younger alumni base has made the Smith Center louder. For example, after the then top-ranked Connecticut Huskies were defeated by Carolina at the Dean Dome in 2004, Huskies coach Jim Calhoun said, "I don't know what they are talking about because there was no 'wine and cheese' crowd here today." After the Tar Heels defeated then top-ranked Ohio State University in 2007, Buckeye coach Thad Matta stated, "I think I’ve never been in a building that was as loud as that building was at times."[6]

The arena is usually at its loudest for games against Duke; however, during a regular-season game against Maryland in 2000, more students were allowed into the lower level. The game had been postponed two days because of a heavy snowstorm. Students were also allowed to take most of the lower level seats during the Tar Heels' National Invitation Tournament appearance in 2003. 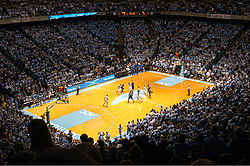 The arena has also held many concerts and is used by many of the graduate and professional schools, such as the UNC School of Law, for commencement ceremonies each year, as well as the same for all undergraduates receiving degrees in December of each year. It is also the graduation site for the local high schools each June.

Advertising arrangements, such as a signage deal with Wachovia Bank (now Wells Fargo) fund the arena.[11]

The arena has also hosted concerts from Bruce Springsteen, Bon Jovi, Guns & Roses, Boyz II Men, and many others. On April 28, 2008, then presidential-candidate Barack Obama held a rally in the arena in anticipation of the North Carolina primary. Senator Obama spoke in front of 18,000 while showing support of his surroundings in a Carolina-blue tie. [12] [13]