René Trouin, Sieur du Gué, usually called René Duguay-Trouin, (Saint Malo, 10 June 1673 - 1736) was a famous French corsair of Saint-Malo. He had a brilliant privateering and naval career and eventually became "Lieutenant-General of the Naval Armies of the King" (i.e. admiral) (French:Lieutenant-Général des armées navales du roi), and a Commander in the Order of Saint-Louis. Ten ships of the French Navy were named in his honour.

His family operated a shipping business in Saint Malo, a port favoured by corsairs.

He first went to sea as a volunteer aboard a privateer, the Trinité, under Captain Legoux, on the 16 December 1690. The Trinité subsequently captured the François Samuel and Seven Stars of Scotland. Duguay-Trouin displayed such bravery that he was handed command of the Danycan, soon after he turned 18.

On 6 June 1692, the King handed him command of a forty-gun ship, the Hercule. He captured five ships at the entrance of the Channel. 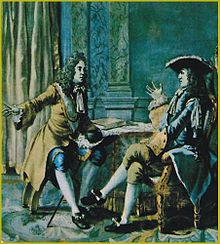 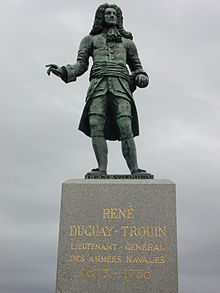 Louis XIV handed him a sword of honour in 1694, and made him a nobleman in 1709, with the motto Dedit haec insignia virtus ("Bravery awarded these honours"). At the time, he had captured 16 warships and over 300 merchantmen from the English and Dutch.

On 12 April 1694, Duguay-Trouin, aboard the ship Diligente, covered the escape of a convoy which he was escorting but was defeated by a six-ship squadron commanded by Admiral David Mitchell. The Diligente, barely afloat and having lost most of her men, was forced to strike her colours and surrender. He was taken as prisoner to Plymouth.

The English admiralty, upon learning that Trouin had fired upon the Prince of Orange while flying the English flag, had him locked in an iron room. On 19 June 1694, he made an adventurous escape, by capturing a small boat that he had bought from a friendly Swedish captain whose ship was lying nearby. He was accompanied by Lieutenant Nicolas Thomas, surgeon Lhermite, Pierre Legendre and the quartermaster. He landed in Brittany and returned to Saint-Malo.

In 1697, the treaty of Ryswick put a halt to the privateers and Duguay-Trouin spent his time in Saint-Malo with women. He was involved in a duel with a gentleman, Charles Cognetz, who had allegedly cheated in a game of cards. Both were taken to the police officer, M de Vauborel, who explicitly forbade any further violence.

In 1702, as the War of the Spanish Succession broke out, Duguay-Trouin commanded the Bellone and the Railleuse. He became an officer in the French Marine Royale. In 1704-1705 he commanded the ship "Jason" and captured the British ships of the line HMS Elizabeth and HMS Coventry.

On 21 October 1707, together with Claude de Forbin, he achieved his greatest victory against a British squadron, in the Battle at the Lizard.

In 1709 he captured the British ship of the line HMS Bristol.

On 21 September 1711, in an 11-day battle, he captured Rio de Janeiro, then believed impregnable, with twelve ships and 6 000 men, in spite of the defence consisting of seven ships of the line, five forts and 12 000 men; he held the governor for ransom. Investors in this venture doubled their money, and Duguay-Trouin earned a promotion to Lieutenant général de la Marine.

Duguay-Trouin is mentioned in Volume II, "Within A Budding Grove", of Marcel Proust's early twentieth century Masterpiece of French Literature, "In Search of Lost Time" (previously published as "A Remembrance of Things Past"). The reference occurs in an interlude section of the work entitled "Place Names: the Place" juxtaposed with other Impressionistic images. This reference specifically compares the brave image of the warrior's statue with the banal image of ordinary people eating sorbets in a bakery, illustrating that at the time, Duguay-Trouin's influence on French society was still so pervasive that statues of his form were commonplace. These statues were easily identifiable and even taken for granted throughout France, and they were instantly recognizable to the French citizenry fully two hundred years after his death.