Emily Jordan Osment (born March 10, 1992)[2] is an American teen actress, singer-songwriter and voice actress born in Los Angeles, California. After working in several television films in her childhood, she gained fame for co-starring as Gerti Giggles in Spy Kids 2: Island of Lost Dreams and Spy Kids 3-D: Game Over. She went on to co-star in the Emmy Award-nominated[3] Disney Channel sitcom Hannah Montana as Lilly Truscott as well as the series movie, Hannah Montana: The Movie.[4] She also starred as Cassie in R. L. Stine's: The Haunting Hour Volume One: Don't Think About It and most recently the Disney Channel Original Movie, Dadnapped as Melissa Morris.

Osment expanded her repertoire into pop music and more recently alternative/indie rock where she has recorded teen pop hits like "I Don't Think About It", "If I Didn't Have You" alongside her Hannah Montana co-star Mitchel Musso, and most recently "Once Upon a Dream".

Osment's debut album, Fight or Flight was released on October 5, 2010 via Wind-up Records, and it features lead single "Let's Be Friends" which was released July 7, 2010.[5]

Osment was born in Los Angeles,[2] where her family still resides, to actor Michael Eugene Osment,[6] and Theresa Osment (née Seifert), an English teacher.[7][8] Her father has appeared in various films and was in her movie Soccer Mom, and her older brother is the Academy Award-nominated actor Haley Joel Osment. She was raised Roman Catholic.[9]

Osment's into the entertainment industry began in 1998, when she was cast in a commercial for flower delivery company FTD.[10] From there she went on to feature in many commercials, after which she made her acting debut in the 1999 film The Secret Life of Girls, starring Eugene Levy and Linda Hamilton. The same year, she co-starred with Glenn Close in the Hallmark Classic telefilm Sarah, Plain and Tall: Winter's End, a role that would lead a Young Artist Award nomination.[10] Since then, she has gone on to do a number of roles, such as appearances on television shows like Touched by an Angel, Friends, and 3rd Rock from the Sun.

In 2002, Osment made her film debut as Gerti Giggles in Spy Kids 2: Island of Lost Dreams which grossed $119 million globally and for which she won the "Young Artist Award" for best performance in a feature film. In 2003, she reprised her role in the third part of the Spy Kids series, Spy Kids 3-D: Game Over, which grossed $197 million worldwide.[11][12]

In 2006, Osment got the role of Lilly Truscott in the Disney Channel series Hannah Montana. The series premiere scored record ratings for the Disney Channel with 5.4 million viewers, a response "beyond our wildest expectations", according to the president of Disney Channel Entertainment.[13][14] The show earned her a Young Artist Award nomination in 2007 for best performance in a TV series (Comedy or Drama). She also appeared in the Disney Channel Hannah Montana promotion "Hannah Montana's Backstage Secrets", in which she portrays Lola in a fictional interview set in the show's canon. In addition, she helped to design some of the pieces from the Hannah Montana clothing collection which Disney released in the latter part of the summer in 2006.[15]

On December 25, Osment hosted the Walt Disney World Christmas Day Parade with Hannah Montana co-star Mitchel Musso. The parade featured acts like Miley Cyrus and the High School Musical cast. She and Musso performed a sketch based on a Hannah Montana episode. She also had a voice over role in a movie called Holidaze: The Christmas That Almost Didn't Happen, which also featured the voices of fellow Disney Channel stars Brenda Song and Dylan and Cole Sprouse. She performed several songs for the movie, including "Don't Ya Just Love Christmas" and "One Day".

Osment did a voice-over role in the Disney movie Lilo & Stitch 2: Stitch Has a Glitch and also a voice role in Edward Fubbwupper Fibbed Big. She also starred as a goth in R. L. Stine's: The Haunting Hour Volume One: Don't Think About It[16][17][18][19][20][21][22] (co-starring with Hannah Montana co-star Cody Linley). It earned her a Young Artist Award nomination in 2008 for "Best Performance in a TV Movie, Miniseries or Special Leading Young Actress". In 2007, she guest starred as Kelly and tall skunk girl on Disney Channel's Shorty McShorts' Shorts.

According to an audio interview with Osment backstage at the Grammys, she is to start filming a new movie called Soccer Mom. In April 2008, Parade magazine and Forbes ranked her #1 in their Hot Kid Stars To Watch list.[23] She also starred in the Disney Channel Original Movie, Dadnapped. The film premiered in February 2009.

As of May 2011, Osment has finished filming a made-for-tv-movie for ABC Family in Vancouver called Cyberbully which stars Kelly Rowan and Kay Panabaker. She will play the role of "Taylor Hillridge" who becomes a victim of cyber bullying. 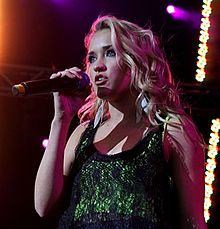 Osment sang vocals in Billy Ray Cyrus's song "You've Got a Friend" from his 2007 album Home at Last. She has also recorded a song entitled "I Don't Think About It" for The Haunting Hour Volume One under the label Hatchery, for which she shot an accompanying music video. The video was released in The Haunting Hour DVD and premiered on Cartoon Network.

The music video shows Osment singing the song in a recording studio. Throughout it are scenes of her singing to the song with crazy animations in the background. Another portion of it shows clips from the movie The Haunting Hour: Don't Think About It. IT also shows behind the scenes clips and some with home videos of her.

According to an audio interview with Osment backstage at the Grammys 2008, she is currently writing and recording tracks with Eve 6. In an interview with Half Taft Blue in 2008, she said that she is working on her EP which is called All the Right Wrongs, though the sound will be completely different from Disney pop. Instead, the main genre will be Indie rock, and the EP will be released. She is set to write most of the songs on the album, with the new track "All The Way Up" being premiered on Radio Disney in August 2009.

Osment describes her music as "definitely Pop but with an Alternative rock edge." She has collaborated on tunes with Tom Higgenson, Max Collins, Tony Fagenson, Toby Gad and Mandi Perkins.[27][28] On September 18, 2009, Osment tweeted the songs that would be featured in her EP on her official Twitter page.[29]

On March 24, Osment confirmed on Good Day NY that her debut album is set to be released in the Summer 2010.[30] The first single, "Let's Be Friends" from her debut album premiered on JSYK.com on June 7, 2010.[31] On June 3, it was announced that the album will be released this fall.[32] She announced via Facebook on August 16 that her album would be released in the US on October 5 and that it would be titled Fight or Flight. The cover art was revealed August 17. The next single off Fight or Flight was "Lovesick".

In May 2011, she released her next single "Hush" to Canadian Radio. The song is a duet between her and Josh Ramsay.

In July 2011, she released her newest single "Drift". Which is also featured in Cyberbully.

That same year, Osment signed a deal to appear in a nationwide campaign called "Smart Girls Rock" by the New York-based denim brand Vanilla Star. "It's a new line for girls, the clothes are really denim and girly with an edge of punk."[33] She promoted her song "I Don't Think About It" with the release of the campaign and commercial.

Studio albums
Fight or Flight · When I'm Kissing You
EPs
All the Right Wrongs
Singles
"All the Way Up" · "You Are the Only One" · "Let's Be Friends" · "Lovesick" · "Hush (with Josh Ramsay)" · "Drift"
Promotional singles
" Average Girl" · "What About Me?"
Soundtrack singles
"I Don't Think About It" · "If I Didn't Have You"
Related
Haley Joel Osment · Lilly Truscott