Who's That Knocking at My Door

Who's That Knocking at My Door

Infobox Film
name = Who's That Knocking at My Door 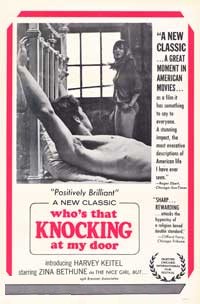 "Who's That Knocking at My Door", originally titled "I Call First", is 's first . Exploring themes of similar to those in his later film "", the story follows J.R. () as he struggles to accept the secret hidden by his girlfriend (). Winner of the 1968 Chicago Film Festival.

J.R. is a typical Italian-American on the streets of . When he gets involved with a local girl, he decides to get married and settle down, but when he learns that she was once raped, he cannot handle it. More explicitly linked with Catholic guilt than Scorsese's later work, we see what happens to J.R. when his religious guilt catches up with him.

"Who's That Knocking at My Door" was filmed over the course of many years, undergoing many changes, new directions and different names along the way. The film began in 1965 as a student short film about J.R. and his do-nothing friends called "Bring on the Dancing Girls". In 1967, the romance plot with was introduced and spliced together with the earlier film, and the title was changed to "I Call First". This version of the film received its world premiere at the in November 1967. Finally, in 1968, exploitation distributor offered to buy the picture and distribute it on the condition that a sex scene be added to give the film sex exploitation angles for marketing purposes. Scorsese shot and edited a technically beautiful but largely gratuitous montage of J.R. fantasizing about bedding a series of prostitutes (shot in , with a visibly older Keitel) and the film finally became "Who's That Knocking at My Door" (named for the song which closes the film). [ cite web|url= http://www.dvdverdict.com/reviews/whosthatknocking.php|title= DVD Verdict Review: "Who's That Knocking at My Door"|accessdate= 2007-11-01|Publisher=DVD Verdict] The film was then re-issued under the title "J.R." in 1970 [ cite web|url= http://www.filmreference.com/film/26/Martin-Scorsese.html|title= Martin Scorsese Biography (1942-)|accessdate= 2007-11-01|Publisher=NetIndustries, LLC.] , however all subsequent releases have been published under the 1968 title.

The film was shot with a combination of and cameras. Scorsese shot most of the 35mm footage with a Mitchell BNC camera, a very cumbersome camera that impeded mobility. He opted to shoot several scenes with the 16mm Eclair NPR camera in order to introduce greater mobility, then blow up the footage to 35mm.

American critic gave the film an extremely positive review after its world premiere at the in November 1967 (when it still went by the name "I Call First"). He called the film "a work that is absolutely genuine, artistically satisfying and technically comparable to the best films being made anywhere. I have no reservations in describing it as a great moment in American movies."

When the film finally received its theatrical release two years later, Ebert admitted that he had been perhaps a little over eager with his first review, admitting that "Scorsese was occasionally too obvious, and the film has serious structural flaws". However, he was still highly positive towards the film, and suggested that "It is possible that with more experience and maturity Scorsese will direct more polished, finished films."

Martin Scorsese's mother, Catherine appears briefly as J.R.'s mother. Mrs. Scorsese would continue to appear in many of her son's films until her death in 1997. Scorsese himself appears uncredited as one of the gangsters. To this day, he still makes in many of his films.

The role of Sally Gaga is played by Michael Scala, the father of rapper .