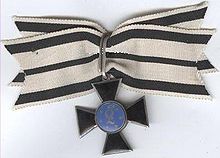 The Order of Louise (German: Luisen-Orden) was founded in 1814 by Frederick William III of Prussia to honor his late wife, the much beloved Queen Luise (née Luise Auguste Wilhelmine Amalie, Herzogin zu Mecklenburg-Strelitz). This order was chivalric in nature, but was intended strictly for women whose service to Germany was worthy of such high national recognition. Its dame companion members were limited to 100 in number, and were intended to be drawn from all classes.

Though the Prussian king was technically the "Sovereign of the Orders" of the realm, the Chief of the Order of Louise was the reigning queen. Daughters in the royal family were invested with this order in lieu of the Order of the Black Eagle, Order of the Red Eagle Grand Cross, Prussian Crown Order First Class, and Royal House Order of Hohenzollern that were reserved for the sons. 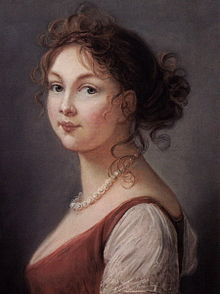 Queen Louise of Prussia, for whom the Order of Louise was named. Portrait by Elizabeth Vigee-LeBrun, 1801 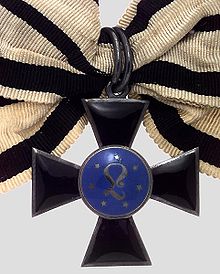 Badge of the Order of Louise, First Class

The text of the original royal proclamation that created the Order roughly translates as follows:

When the men of our brave armies bled for the homeland, you found relief in the maintaining care of the women. Faith and hope gave the mothers and daughters of the country the power… for the grand purpose (of the nation). It is impossible to honor or (decorate them enough) for what they have accomplished; but We find it justified to lend them an honor, whose (contributions) are especially acknowledged. We decree therefore hereby following:

1. The honor shall bear the meaningful name:

Establish that we with this, a small, black-enameled golden cross. The (center medallion) on both sides will be of sky blue enamel; with the letter “L” (on the obverse), surrounded by a wreath of (seven) stars; and on the (reverse) the year “1813/1814”.

2. This order is worn (suspended from) a bow of the white ribbon of the Iron Cross (and shall be worn) on the left breast.

3. The award (will be bestowed) without consideration of social position or rank; however only such persons can receive it, are, who belong to the homeland through birth or marriage, or otherwise nationalized (citizens).

4. The number (of members) is restricted to one hundred.

5. To its selection let's decree hereby a Capitel, which, under the chair of the woman princess Wilhelm Königl. Highness, out of four women …

6. The Capitel will consider candidates, of the feminine sex, from all provinces of the nation, carefully test their credentials, out of which they will decide the worthiest, select up to the available / vacant number (of memberships) and indicate them to Us (the king and emperor) confirmation being specifically reserved for Us. The bestowal / conferral of the award results then, after Our confirmation, under the signature of the Princess Wilhelm Königl. Highness.

7. We hereby order the management of the membership to the (wife of) field marshal count v. d. Gröben.

Classes of Membership and Insignia

At its initial creation, in 1814, the Order was only available in one class. A second class was added during the reign of Wilhelm I.

Dames, First Class, wore the black-enameled cross with its blue-enameled, medallion centerpiece, suspended from a predominantly white ribbon, with three black stripes, as tied in a bow. Though the statutes indicate that the badge was to be worn on the left breast, many period portraits show the members wearing the badge on or at the left shoulder of their dresses.

Dames, Second Class, wore a similarly-designed silver cross, minus the black enamel, which was also worn suspended from the white and black bow. The Prussian State Handbook of 1907 indicates further variants and subsets of the Second Class of the order: II.1 with silver crown, II.1 (without crown), and II.2.

The following is a partial list of members compiled from the Prussian State Handbook, from the years 1874 through 1907: 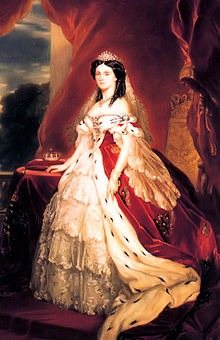 Kaiserin Augusta, wearing the Prussian state regalia, and the Order of Louise (on her left shoulder). Portrait by Franz Xavier Winterhalter, ca. 1861 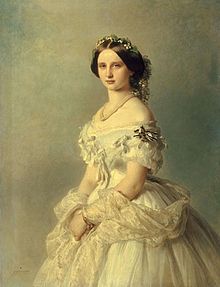 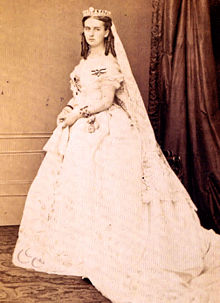