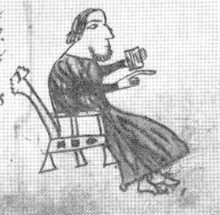 Drawing of a judge from the Peniarth 28 manuscript,
Categories: