The Outlying Fells of Lakeland

The Outlying Fells of Lakeland 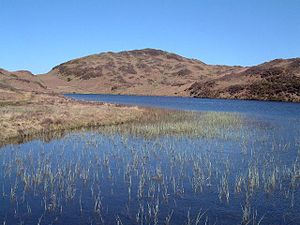 The Outlying Fells of Lakeland is a book written by Alfred Wainwright, dealing with hills in and around the Lake District of England. It differs from Wainwright's Pictorial Guides in that it describes a series of walks, some of them taking in several summits, rather than devoting a chapter to each fell. This has caused some confusion on the part of authors attempting to prepare a definitive list of peaks. The Outlying Fells do not form part of the 214 hills generally accepted as comprising the Wainwrights, but they are included in Category 2B of the Hill Walkers Register maintained by the Long Distance Walkers Association.

The list at the back of Wainwright's book contains 110 named fells and summits. Close inspection shows seven of them to refer to other hills in the list, while Newton Fell has two summits. Thus:

The addition of the 12 nameless summits brings the number of Wainwright's Outlying Fells to 116. This is 14 more than the 102 hills listed in John M. Turner's New Combined Indexes to A. Wainwright's Pictorial Guides (second edition, Lingdales Press, 1984). Turner's list omits two tops explicitly mentioned in the book (St. John's Hill and Newton Fell South) and the 12 nameless summits, and it contains many inaccuracies. For more up-to-date heights, grid references and other data, see Database of British Hills.

The list below has been arranged in alphabetical order rather than height in order to align as far as possible with the list at the back of Wainwright's book.