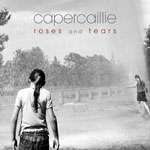 "Roses and Tears" is an by band Capercaillie. It is their first studio album in over five years.

The new title is Roses and Tears rather than the previously mentioned Call it a Day. Call it a Day was a working title with reference to the band's plans to wind down their performances and eventually disband completely in 2008.