British–Maltese relations are foreign relations between Malta and the United Kingdom. The two countries share membership of the European Union and Commonwealth of Nations.

The British took possession of Malta in 1800, defeating an unpopular French garrison that had taken possession of the islands two years earlier. Malta remained under British control until the end of the Napoleonic wars, and formally became a British colony under the Treaty of Paris of 1814. The islands were seen as being of key strategic significance, lying between Gibraltar and the Suez Canal, and became an important shipping station on the sea route between Great Britain and British India. As a result, Malta became the headquarters of the British Mediterranean Fleet until the 1930s.

The islands were essentially under British military rule until 1849, when a partly elected legislative council was formed. In 1921, this was replaced with a fully elected bicameral parliament, which brought Malta a degree of Home Rule within the British Empire.

In the Second World War, the islands were besieged by Axis forces, but did not fall. The heroism of the people of Malta during that time earned them a collective George Cross, a depiction of which remains on the Maltese flag until the present day.

In the 1950s and 1960s, serious consideration was given in the United Kingdom and Malta to the idea of a political union between the two countries. However, this plan for "Integration with Britain" foundered, and Malta gained its independence from the United Kingdom in 1964. The British monarch Queen Elizabeth II remained Queen of Malta until the country became a Republic in 1974.

There is a small Maltese community in the United Kingdom. In addition, the British overseas territory of Gibraltar has been influenced by significant 18th and 19th Century immigration from Malta (see "History of the Maltese in Gibraltar"). 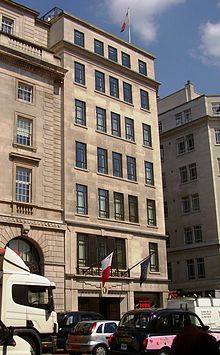 The Malta High Commission in London

The High Commission of Malta in London is located in Malta House, on Piccadilly.