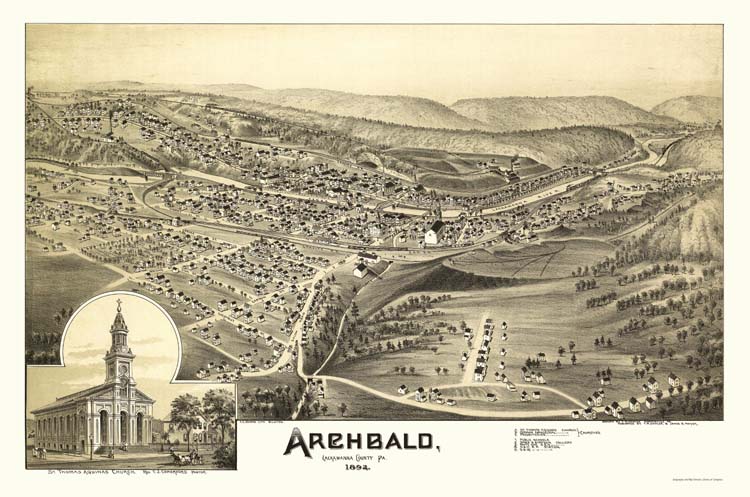 image_caption = Archbald, as depicted on an 1892 panoramic map

Archbald is also home of Valley View High School, part of the Valley View school district. The district also comprises the neighboring boroughs of Blakely and Jessup, an area of approximately convert|51|sqmi|km2; 18,437 people reside within its boundaries of which 2,575 are Valley View students. In 1992, the Valley View Cougars were the state class AA football champions. In 2000, the girls' softball team was state champion.

The Archbald Borough consists of the towns of Archbald, Eynon and Sturges. The borough also has nicknames for many of its different sections, such as: Frogtown, Dark Valley, Dutch Hill, the No. 5 Hill, East Side, Nebraska, Winton and Riverside.

* = Eynon, Pennsylvania was given the title of Area 33; henceforth, Eynon Hose Company #3 now operates as Station 33.

The area of Archbald Borough was originally known as White Oak Run. It was named Archbald in 1876 after James Archbald, the first mayor of the city of Carbondale.

is a convert|150|acre|km2|sing=on park in northeastern Pennsylvania. The park is named for Archbald Pothole, a geologic feature that formed during the Wisconsin Glacial Period, around 15,000 years ago. The pothole is convert|38|ft|m deep and has an elliptical shape. The diameter of the pothole decreases downward. The largest diameter is convert|42|ft|m by convert|24|ft|m. At the bottom it is convert|17|ft|m by convert|14|ft|m. The pothole has a volume of about convert|18600|cuft|m3, therefore it could hold approximately 140,000 gallons.

is a large Roman Catholic Church located on Church Street in Archbald.